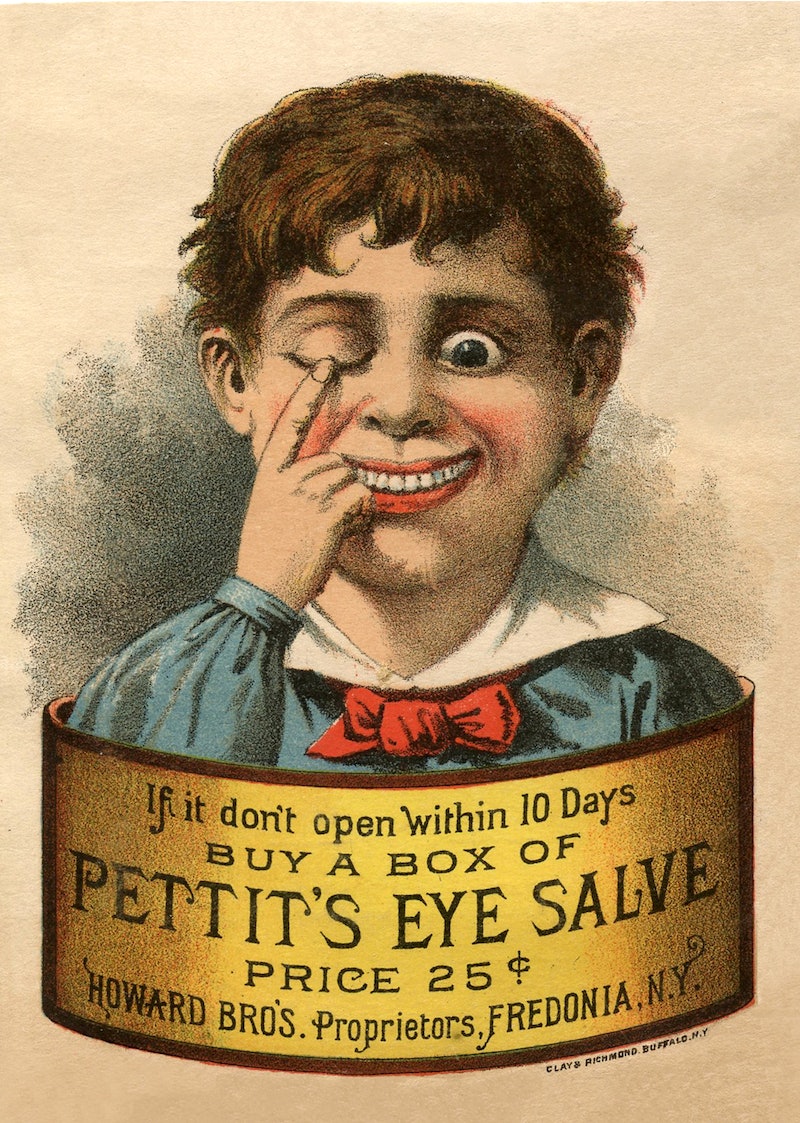 When we look back to the past — be it in the pages of history books or when encountering vintage fashion and beauty advertisements — it can be easy to see how far contemporary society has come. However, in the last century or so there have still existed some shocking images that will likely make you question where it was that humanity went so wrong.

Much criticism is made these days of brands like American Apparel that have unfortunately become synonymous with utilizing and catering to the male gaze in their campaigns. But they didn’t pluck the idea out of thin air. For decades, the advertising industry has used scandalous imagery to cause a stir, get people talking about their products, and, most primally, to sell us stuff. Much of said kind of imagery has fallen into two categories: Sex appeal or scare-mongering, both tapping into two of humankind’s most basic instincts.

Although sexism is undoubtedly still present in some modern advertising, there seems to at least be a decline in using scare tactics or the shock factor to sell us things. But this kind of advertising was certainly prevalent throughout history. These 15 vintage adverts remain terrifying, but whether the brands were aware of it at the time or not is another matter entirely.

Ever wanted to "reduce your flesh" by simply wearing clothes? Fancy "dissolving" your fat in one-two-three? Although this was probably an aesthetically pleasing advert back when it was written, nowadays it sounds more like the blurb of a horror novel. Or a fat shaming horror novel.

Just imagine your friend turning up to your house with that gear on. You'd likely assume they had a flesh-eating disease.

This advertisement for Pettit's Eye Salve, which I can only assume is what you use when your eyes "don't open within 10 days," must have been a nightmare for anyone who was afraid of dolls or ventriloquist dummies.

It's safe to say this ad would be creepy to anyone, considering the sinister grin on the child's face. It also begs the question: What on earth were people doing that resulted in their eyes being sealed shut for 10 days?

Sexism at its scariest: Here we see a man literally standing on the head of a woman who is simultaneously portrayed as a tiger rug, accompanied by the words, "It's nice to have a girl around the house."

There are so many things wrong with this advert, including underlying themes of domestic abuse and endangered animal hunting. An equivalent image today might be a snap of an obnoxious trophy hunter posing with their kill, with an edit including a picture of their partner's head on the dead animal's body.

I imagine the brand was trying to make a joke about who "wears the trousers" in a relationship, with the man coming out on top.

4. A Baby Holding A Razor

A baby holding a razor... How did this ever seem like a good idea? Yes, we get that the razor is supposed to be "safe," but I would wager that there will never, ever be a time when razors are safe enough to hand over to an infant. This is likely why it's now illegal to sell razor blades to anyone under 18 in the UK.

Making a joke about mental health for commerce, and in particular suicide, is horrendous. This ad is like a snapshot into an era during which mental health was not generally properly addressed, and folks with mental health issues were often not taken seriously, misdiagnosed, or worse.

Personally, I'm thankful that society is beginning to treat mental health issues with the respect and seriousness required. We're not all the way there, but progress has been made.

This advert offers a terrifying glimpse into a fully patriarchal, sexist future, where women are entirely subservient to men and must (literally) kneel in their presence.

Thankfully, Western society is slowly coming around to the idea that all humans are equal and I hope never to see a day when the earth becomes "a man's world," or even "a woman's world."

I can't say that I know anyone who would willingly want to walk around looking like the villain of a slasher movie, no matter the alleged beauty benefits. This Toilet Mask (or Face Glove) was used for "beautifying and preserving the skin and removing complexional imperfections." Nowadays, this product would likely be more suited to Halloween than everyday use.

Arguably no advert should compare any human to an inanimate object and portray them being "happily" dragged along the floor by their hair. Although this was perhaps funny at the time it was released, I can't help but find this terrifying on so many levels.

The ad suggests that all women spend their time lounging around in their underwear, talking on the phone. Weirdly, when (what appears to be) a caveman comes to use this woman as his human club, she carries on normally and seems to be almost oblivious to the situation.

Creating an advert with themes of abandonment is just plain odd, not to mention disrespectful to those who have endured similarly traumatic experiences. Most of us have likely encountered stories (fictional or otherwise) about parents abandoning their children on strangers' doorsteps, possibly due to the child being born out of wedlock or the mother being "too young." But this one turns those scenarios into humor, and it's more than a little uncomfy.

Additionally, this ad shames women who give their kids up for adoption, without any consideration given to their circumstances or the simple notion that adoption can be the best step for a whole lot of people.

If Freddy Krueger-style fingernails are your thing, then go ahead and use this nail lacquer to your heart's content. Creepy vibes aside, being a lover of short nails means you couldn't pay me to wear mine as long as this. I struggle with fake nails, let alone four-inch talons.

11. Corsets For All The Family

A perfect health corset superior to all others? Corsets for small children seem like a great idea, right? All I can say is that I sincerely hope the "sensible mothers" of today would opt out of dressing their "beautiful children" in restrictive, body-shaping garments.

Although nothing seems too amiss in this photo, animal lovers may notice the pink elephant in the room. I am hoping there was some kind of editing involved, or at least that the elephant was not harmed in the making of this image.

As a vegan, the thought of an animal being dyed pink makes my blood boil. Even though many of us would like to believe that animals aren't ever harmed in the fashion and beauty industries, the truth is that lots of animals still suffer for our vanity.

Oh, I finally get it! All women are supposed to lie naked on the floor admiring footwear. Excuse me while I undress. Yeah, OK.

This utterly bizarre advert would hopefully cause a stir among modern women in the Western world, where equality is a work in progress rather than a joke.

A half-drowned child being crushed under a bath tub is totally selling this soap to me. I have no idea what the hell is going on in this image, but it looks like a horror movie poster rather than a means to sell soap.

If anything, I'm put off from buying bars of soap after seeing this. I'll be sticking to shower gel from now on, which is less likely to slip out of my hands. I definitely don't want to end up crying, naked, and hurt on the floor after reaching for a bar of soap.

A woman in her underwear being grabbed by a gang of fully-clothed men? This "game" looks anything but fun. I mean, were they consciously trying to promote rape culture?

The advert could be the most terrifying of all, and makes me feel blessed to be born in an era where this kind of imagery would hopefully be met with a whole lot of backlash.

Perhaps people of the future will look back at the ads of today and grimace at the images they see. At least, like these crazy ads, they will realize how far society has (hopefully) progressed. As for now, we still have plenty of work to do.