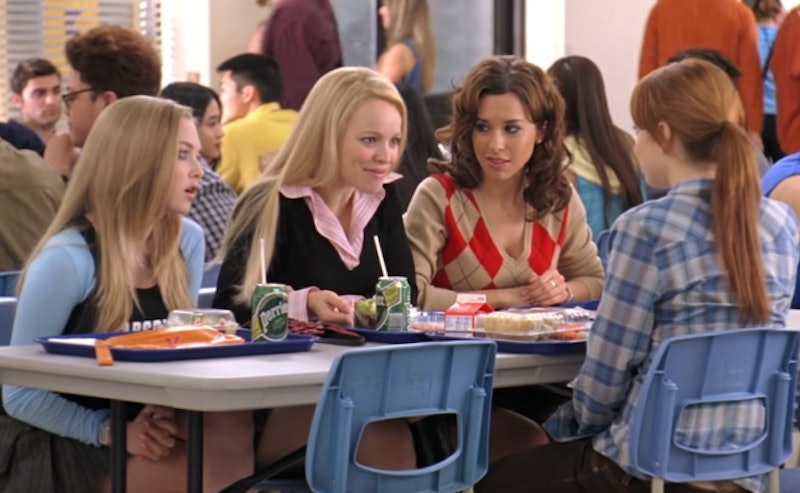 Mean Girls is a hilarious film that provides a snapshot of not only the lives of many Millennial high school girls, but of the early 2000s in general. The backhanded compliments, the inter girl gang politics, and the iconic Mean Girls fashion perfectly encapsulate what high school might have been like if you were a part of the popular crowd. It’s been almost 12 years since this legendary teen movie was released to the world, but IMO it will stay a cult classic like ‘90s-loved Clueless for many years to come.

Aside from the witty one liners sprinkled throughout Mean Girls, which can be attributed to Tina Fey, who wrote the screenplay, this film's success could also be down in part to the wardrobe choices that epitomized early 2000s teen girl style.

Costume designer Mary Jane Fort was the fairy godmother of Mean Girls; without her magic touch, it may not have become the stylish masterpiece it is known as today. During an interview with Nylon, Fort described how the Plastics’ fashion portrayed their overall vibe, telling the publication, “When you see this group, you want to feel like you walked into something delicious and wonderful even though it’s kind of bad for you.”

So let’s take a look back at some of the most memorable fashion trends that Mean Girls started.

"On Wednesdays, we wear pink," is one of the most memorable lines from Mean Girls , spoken by Karen to new girl Cady after the Plastics invite Cady to sit with them at lunch. The Plastics' fashion rules had to be strictly adhered to, otherwise you were out of the gang.

On Wednesdays, you could choose to add a splash of pink to your ensemble or wear an all-pink outfit like Karen. This trend translated easily into the real world, especially for girly girls who already loved the hue.

Who could forget Amy Poehler's laugh-out-loud portrayal of Regina's mom? She was rocking major The Real Housewives vibes way before they were even a thing. But on a more sartorial note, Poehler may have helped make Juicy Couture tracksuits even more popular than they already were in 2004.

Regina, Gretchen, and Karen all wore super sassy slogan tees. Of course, Regina's was the sassiest, proclaiming the understatement of the century: That she was "a little bit dramatic." Gretchen wore a "Royal Punk" emblazoned top with a plaid mini skirt while Karen sported a "Bling Bling" slogan T-shirt.

In reality, people started wearing slogan tees with popular Mean Girls quotes on them like "you can't sit with us" as well as anything else that told the world you were a total diva.

According to Nylon, Fort expressed that Mean Girls costumes were a combination of vintage and modern fashions. She said, "For Mean Girls, we also went back in the world of when women and girls actually dressed [up] to go to school. In the ’50s your nails were done, your hair was done, and your dresses were impeccable. So it was a little bit of a combination of the future and the past and gave it a contemporary feel."

This might explain the use of knitwear in the Plastics' wardrobes, which makes a nod to 1950s teen attire. However, this preppy knitwear was given a modern revamp by being super tight and sometimes cropped to show stomachs, because early '00s teens were all about the bare midriff.

In the early '00s, our bags only had to be big enough to fit our phone, our lipgloss, our house keys, and maybe a tampon. Tiny bags became a huge '00s trend because big ones were such a waste of space.

6. Patterned & Pleated Mini Skirts With Everything

As the Plastics were only allowed to wear jeans or sweatpants on Fridays, they had to sport dresses and skirts the rest of the week. Patterned and pleated minis added to their preppy vibes; and along with flaunting an occasional bare midriff — or a daily one if you were Gretchen Wieners — they helped the ladies show off as much skin as possible (within school dress codes, of course).

Gretchen loved a diamond patterned, golfer-esque top and she was spotted in more than one style throughout the movie. This could have been an evolved version of the '90s athleisure trend that everyone went mad for. Wearing a feminine, golf-inspired top in the early '00s meant you were fashion forward. You got bonus style points if yours was slightly cropped.

The early adopters of the look within your friendship group probably wore a style akin to Regina and Cady's necklaces, while those who weren't so fashion forward — or who were just huge SATC fans — would wear a style like Carrie's.

When it came to your high school dance, there were certain things that your prom dress had to have: A glossy sheen and no straps. When you put the two together, you felt like Regina George at the Spring Fling.

The Mean Girls Halloween party scene had animal ear headbands as far as the eye could see. Although this was a tongue-in-cheek nod to the culture of the time, it did in fact start a trend of people wearing animal ear headbands all year round. These cutesy headbands trickled their way into festival attire; and before we knew it, Ariana Grande was wearing cat ears in everyday life.

11. Squad Outfits For The Holidays

Before squad dressing was even a thing, the Plastics wore matching Santa outfits to The Winter Talent Show. Back in the early '00s, there may have been loose themes within a group. But nowadays, a squad costume theme is always the way to go. Although this trend took a while to seep down to the masses, it appears to be the Mean Girls trend with the most longevity.

From elaborate rules, to always asking your friends for their advice on a new skirt, Mean Girls fashion was complicated. But it was totally grool, too.

More like this
Here Are All 703 Outfits Rachel Wore On Friends
By Kat George
12 New Year's Nail Ideas That Are Truly Stunning
By Jordan Murray
20 Glamorous Holiday Party Outfits That Give *Opulence*
By Dominique Norman
Cyber Monday Deals 2022: The Best Fashion Sales To Shop
By Dominique Norman
Get Even More From Bustle — Sign Up For The Newsletter