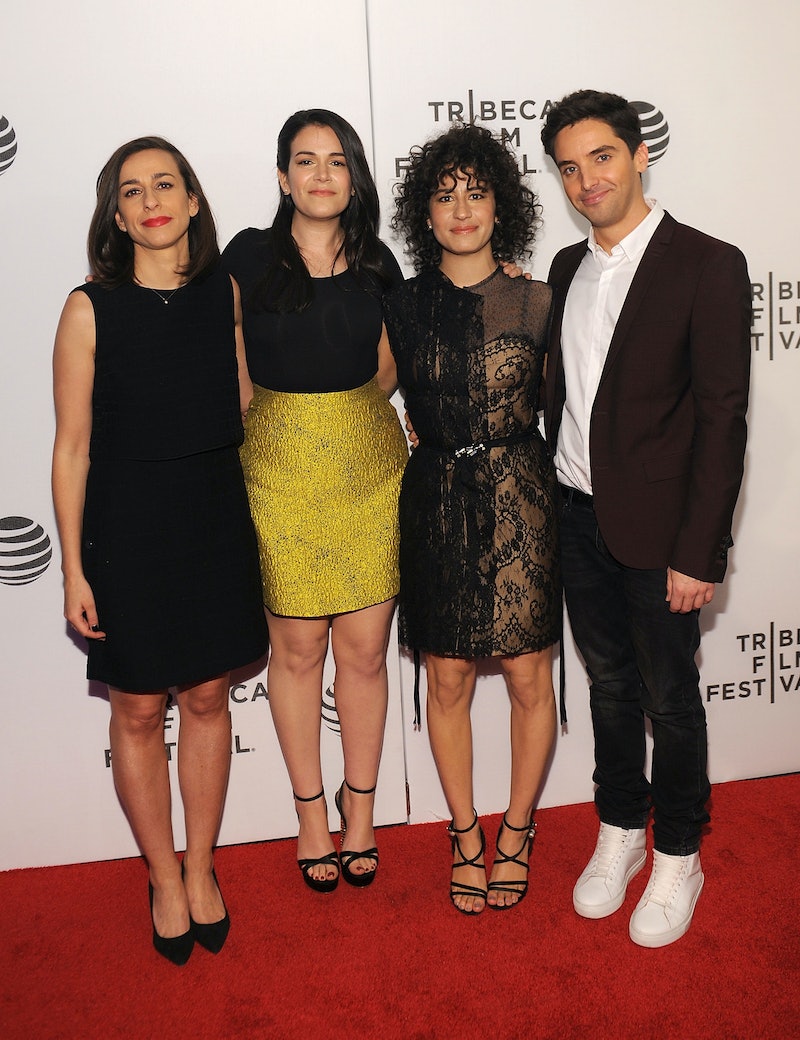 With only 10 episodes per season, Broad City comes into my life like a ray of hilarious, feminist sunshine for a couple of months before the cloud cover takes over once again. Season 3 ended on April 20, so what can fans expect from Broad City Season 4? At the Tribeca Film Festival, Bustle spoke to the people behind and in front of the Comedy Central series' cameras to get some hints about Broad City Season 4. Stars Abbi Jacobson and Ilana Glazer, Trey actor Paul W. Downs, and director Lucia Aniello all gave some dirt on what they are planning for Season 4.

While Jacobson, Glazer, Downs, and Aniello all write for the series, the only one of the four to not be a character on Broad City is Aniello. But, just because you don't recognize her face doesn't mean she isn't extremely involved in creating Broad City. As a producer, writer, and director for the series, Aniello has most likely directed some of your favorite episodes, including Season 2's memorable "Knockoffs." Downs is more than just Abbi's boss at the gym/part-time lover since he writes for the show. He also dates Aniello in real life and the pair formed the production company Paulilu. Jacobson and Glazer's alter egos Abbi and Ilana are the stars of Broad City and all four collaborators met at Upright Citizens Brigade.

Season 3 wrapped up with the episode "Jews on a Plane" and Deadline reported that Season 4 will actually film in winter, which is a change from the show that usually takes place in New York City in the summer. Besides Broad City Season 4 taking place in a different season, here is the scoop from the talented creators themselves.

We Haven't Seen The End Of "Trabbi"

Downs' character Trey will still be around in Season 4, but what about his relationship with Abbi? The pair hooked up in Season 3 and during the episode "Burning Bridges," Ilana discovered Abbi's shameful secret. While she apologized to her BFF, Abbi offended Trey and the last we heard of him in Season 3 was that Trey wasn't returning Abbi's texts or calls. Yet, you should anticipate that the characters will have to deal with one another come Season 4. "I mean Abbi still works at the gym, so we've got to figure something out," Jacobson tells Bustle.

While that doesn't necessarily mean the pair will definitely get back together, there is hope if you 'ship them. Glazer says that as a fan, she would like to see them get back together and Downs reveals how they were surprised by the audience's strong and favorable reaction to the couple. "We were not sure how the audience would take it because Trey and Abbi, while they're coworkers, it's not sort of your first thought for a couple," Downs says. "But, there's people who 'ship Trabbi, so that’s been a crazy thing. I think because of that, we're going to have to explore and see what happens."

"Hillary's pretty hard to top," Aniello says about presidential candidate Hillary Clinton appearing as a guest star on Season 3. But, that doesn't mean that Broad City will put an end to its tremendous use of guest stars. Jacobson says they don't have any specific celebrities in mind for Season 4 and ideas for guest stars don't usually come until they get in the writer's room. "We don't usually take someone and we're like, 'Let's fit them into to something,'" Jacobson says. "It's more like, 'What's the story?' and 'Oh, we need that person who works at the co-op, who would be great for that? Melissa Leo would be amazing for that.'"

Aniello and Downs were more open than Jacobson and Glazer to citing specific people they'd want to see in Broad City Season 4 with Downs saying, "Julia Louis-Dreyfus or Larry David or both, that'd be great." Aniello went with a person less known for her comedy — Vogue 's editor in chief, Anna Wintour. "I'm going to say Anna Wintour, right? That's fun. We haven't had her. That presents a different vibe," Aniello says. Oh, how I'd love a Devil Wears Prada moment between Wintour and the employment-seeking Ilana.

Broad City started out as very episodic, meaning in Seasons 1 and 2, it didn't really matter if you missed an episode or watched the episodes a little out of order — you could still follow the show and enjoy each individual episode. However, Season 3 saw many more story lines being featured in multiple episodes, whether it was Ilana losing her job, Trey and Abbi hooking up, Lincoln becoming more distant from Ilana, or the ladies' journey to Israel. This shift to a more serialized show is intentional, and this trend will continue in Season 4 with Downs thinking it mirrors life for 20-somethings.

"When you're in your 20s, a lot of times you go through experiences that are one day at a time, and as you get older ... the characters have to deal with some of the repercussions of their wild antics, you know," Downs says. "And so because of that, I think making it serial has made it feel much more rewarding for the audience and we really get to live with the characters." I know I'm definitely down to see more of Abbi and Ilana answering for their outrageous actions.

Lincoln Will Be Back

When Hannibal Buress' character Lincoln broke up with Ilana, I was concerned for Ilana's emotional well-being, but I was also concerned for myself. As a huge fan on Buress, did a breakup mean that Hannibal was off of Broad City? He got a little shout-out in the two-part Season 3 finale since Ilana used his bag to travel to Israel, but that was it. As he has been on the show since the very beginning, it wouldn't seem right to never see Lincoln again.

No need to fear because both Glazer and Jacobson confirm that we haven't seen the end of Lincoln. "We didn't write him off. We miss him too," Glazer admits. Jacobson discussed the reaction of viewers to Lincoln and Ilana ending things saying, "People were like angry! We were like, 'Just wait.'" Glazer adds, "But that's good. It's like, 'We'll see you in Season 4.'" So that's some pretty solid confirmation that my favorite TV dentist will return! (Sorry, Tim Whatley.)

We Could Meet Abbi's Mom

Fans were blessed in Season 3 by getting the opportunity to be introduced to the man who had a hand in raising Abbi since Tony Danza portrayed her father in the episode "Philadelphia." As her dad recounted, he and Abbi's mom divorced when Abbi was a kid (they told her about it by the garbage cans so she'd stop playing in the trash), so where is Abbi's mom? Well, when speaking about guest stars, Downs gave the hint of, "We have yet to meet Abbi's mom so there's room for something."

Considering how epic Ilana's parents — portrayed by Susie Essman and Bob Balaban — are, I'd love to see Abbi's parents come to New York City and have some awkward, divorced interactions. Even if the series won't have Danza back in Season 4, I'd be thrilled to get to meet Abbi's mom. Plus, come to think of it, don't you think Jacobson and Louis-Dreyfus bear a slight resemblance?