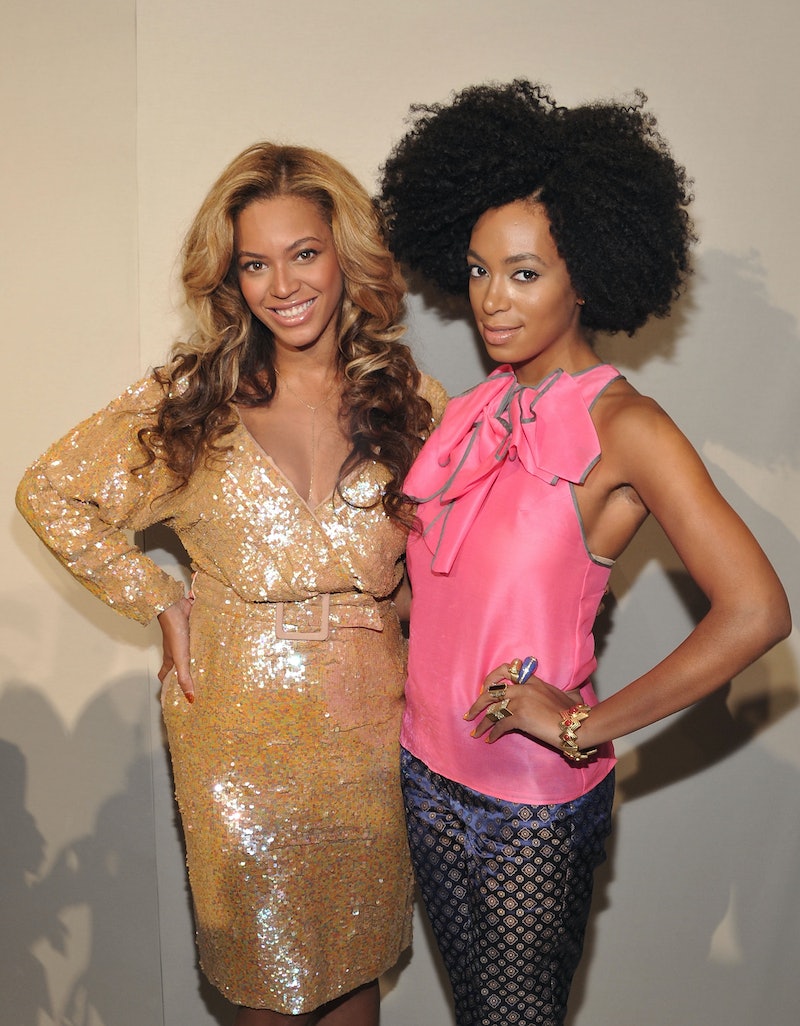 Unless you've been living under a rock the past few days, you already know that Beyoncé's visual album Lemonade is sweeping the damn nation one shocking lyric at a time. Due to the album's main message about a scorned spouse coming to terms with her husband's infidelity and learning how to accept and forgive him, it's natural that the Internet immediately assumed the entire thing was aimed at Bey's husband, Jay Z. Neither party has commented on the rampant speculation, but fans are eager to know what Beyoncé's sister, Solange Knowles, thinks of Lemonade .

Of course, Solange and Bey have always been close, so it would be safe to assume that Solange is super supportive of all of her sister's projects... but this one in particular raises some questions thanks to the subject matter and issues that have come up in the Knowles family over the years. For starters, there was the infamous elevator incident in May 2014 in which Solange was seen attacking Jay Z when leaving a Met Gala after-party.

In the aftermath of the incident, the family released a statement saying, basically, that all was well between them, and then it was never publicly discussed again by Bey, Jay, or Solange.

After the elevator fight, reports suggested that Solange was angry with Jay for allegedly flirting with fashion designer Rachel Roy. Rumors spread that Jay had been cheating on Beyoncé and Solange was defending her sister. Now that the cheating allegations are back in full force due to the album's strong message about infidelity, fans are probably wondering what Solange thinks of Lemonade.

Solange has remained pretty silent on Instagram, but she has been retweeting unrelated tweets about Prince and voting after the special aired on HBO Sunday night, which is kind of telling. She did post one tweet the night of the special, though, which seems to squash any rumors of a problem between she and her sister, without actually using any words at all:

Yep, 15 emojis, most of them lemons, is pretty much all it takes to let fans know that Solange is supportive of Bey's album, so fans can probably rest easy knowing that there's no drama between these two. After all, it's entirely possible that Lemonade isn't about Jay Z at all, but inspired by Solange and Bey's father, Mathew Knowles, and his 31-year marriage to their mom, Tina.

Though the Internet continues to be ablaze with rumors about what Lemonade really means, it seems like Solange has nothing but love for her sister and the album, just as she always has.

Bustle has reached out to reps for Beyoncé, Jay Z, and Roy regarding the cheating allegations.