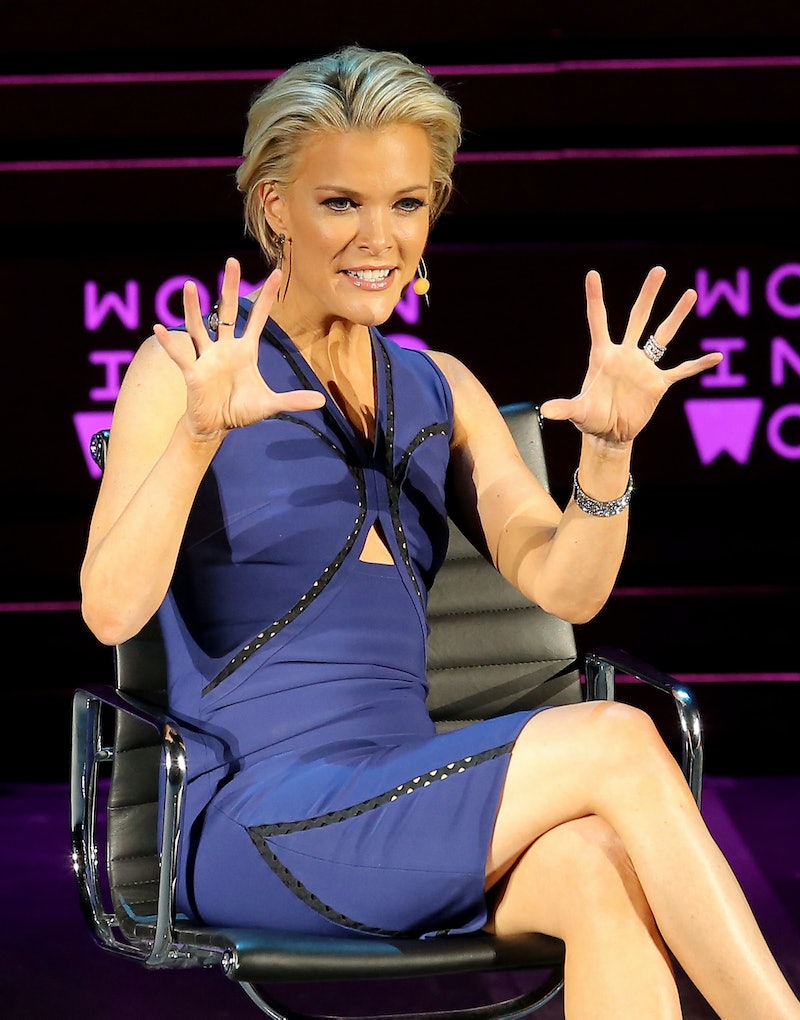 Fox News' most famous anchor has a book deal. The Kelly File host Megyn Kelly's new memoir is coming out later this year. The as yet untitled book is currently slated for a November 15 release.

Last August, Kelly made headlines after she questioned Donald Trump's history of misogynistic comments during the first Republican presidential debate. The candidate began re-tweeting supporters who lambasted the Fox News anchor as a "bimbo," and, while he displayed a halfhearted refusal to call her that himself, he used an ableist slur to dub her "Crazy Megyn." Trump even went so far as to suggest that Kelly was on her period at the time of the debate. You know, because periods make you overly sensitive to fundamental rights, amirite?

Butting heads with Donald Drumpf hasn't knocked Kelly on her heels. In March, she challenged the candidate at a GOP debate in Detroit, asking him to explain the Trump University lawsuit, in which 5,000 plaintiffs allege "that his real estate business curriculum was shady and full of false promises," and "that the tuition left them thousands of dollars in debt, while the classes taught them nothing."

Kelly has at least one more confrontation with Trump on the horizon. On May 17, the two will face off in a one-on-one interview special, portions of which will air on The Kelly File's May 18 episode.

Although Kelly's clash with Trump is both fascinating and cheer-worthy, her personal and political views aren't. For one thing, she has repeatedly shown that she has no idea what feminism is, and has spread her bootstrapper mentality all around while refusing to acknowledge her privilege.

And then there's the fact that she's horribly, horribly racist. Back in 2013, she assured Fox News' juvenile viewers that Santa is white. In March 2015, after the DOJ uncovered racist emails circulating among Ferguson PD accounts, Kelly defended the officers with her assertion that "there are very few companies in America ... [where] ... you won't find racist emails." More recently, at a January GOP debate, she refused to accept Republican presidential contender Chris Christie's stance against ethnic profiling, and said in reference to the San Benardino shooting: "The neighbors said they saw men going in and out of the garage. They saw packages being delivered. They saw Muslims, and they did not think that was enough to call the cops."

This is all to say that, while I hope Kelly's new memoir skewers Trump and his supporters, it would be great to see a turnaround in her attitude toward non-white, non-rich individuals. Like, maybe admitting they're people just like her?

More like this
30 Books To Read This AAPI Heritage Month
By K.W. Colyard
9 Must-Read New Books Out This Week
By K.W. Colyard
The 20 Best Audiobooks To Fall Asleep To
By Aoife Hanna and K.W. Colyard
What Is Barack Obama’s Net Worth? He Makes *Way* More Now As An Ex-President
By Hugh McIntyre
Get Even More From Bustle — Sign Up For The Newsletter