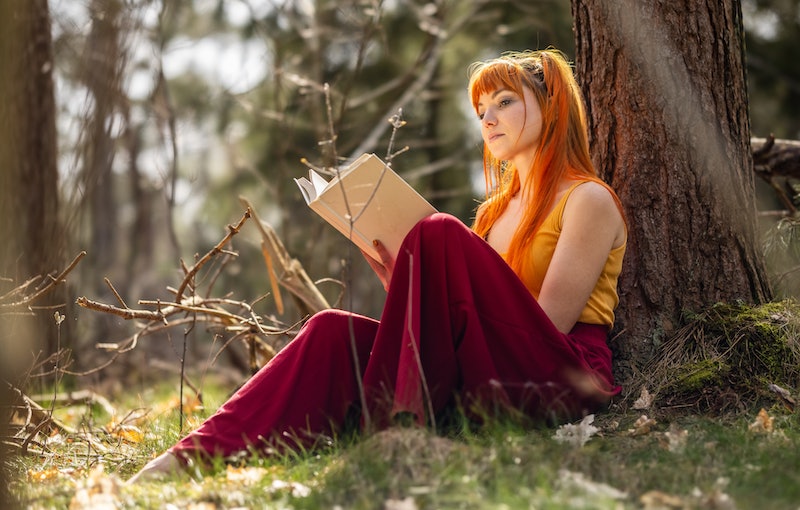 It still kind of surprises me sometimes that I grew up to be a writer — but then again, given my lifelong love of books and reading, maybe I shouldn’t be that surprised. And although I may not have been given one of the many, many baby names fit for bookish women, that doesn’t mean that I haven’t thought an awful lot about them. True, I’ve thought about them more in terms of naming pets than naming babies — my partner’s and my cats are named Arya and Nymeria — but a name is a name, and, well… what’s in a name? Sometimes, everything.

In coming up with this list, I drew not only from the names of great women characters in literature, but also from the names of great women writers in literature; both are worth considering. There are a couple thrown in there that have bookish meanings, too — and lastly, a number of the characters are not only notable for being awesome, but also for being book lovers themselves. What I mean to say is, there’s a wide variety of inspiration here, so cast your net as far as you like and see what you catch.

Are you, too, a bookish woman? Are you having a bookish baby? Try one of these 13 monikers on for size. They might be just right.

Yes, it’s always a risk naming someone after an iconic character — but, well, you’d be hard pressed to find an iconic character more enamored of books than Hermione Granger (except maybe Belle, so there’s your backup if you want something a little less recent). Plus, the name has roots in literature, as well: She’s both a character in Shakespeare’s play The Winter’s Tale , and the daughter of Menelaus and Helen of Troy in Greek mythology. The feminine form of Hermes, it means “earthly” or “well-born.”

Actually, I take it back — Matilda might give Hermione a run for her money. Or maybe they’d just bond over their mutual love of reading, which is also totally cool. For the curious, “Matilda” means “might battle maiden” in German and “brave in war” in Swedish; you could also shorten it to Mattie or Tilda, if that’s how you roll.

Sci-fi fan? Try “Octavia,” after Octavia Butler. Author of a number of notable series (Xenogenesis, Patternist) and standalone works (Kindred, Fledgling), as well as a treasure trove of essays, she takes on issues of hierarchy, race, community, and more in her works; she’s also unflinching in her portrayal of human flaws. Powerful stuff, and incredibly important. She was also the very first sci-fi writer to win a McArthur Genius Grant, which she accomplished in 1995.

If the number eight is significant for you, “Octavia” would also be a good pick — it’s derived from Latin, where it was traditionally given to the eighth child of a family.

No, not as in the My Girl character, Vada (although that’s also a perfectly legit inspiration). Admittedly I haven’t been able to determine the language from which it’s derived — sources say everything from Latin to Russian to Sanskrit — but generally speaking, it means “knowledge.” If your wee one is constantly in search of knowledge, there’s no better place to get it than books.

“Jane” is anything but plain when you think of all the women who have borne the name in books: Janie in Their Eyes Were Watching God (side note: Zora would be a terrific name, too!), Jane Eyre, Jane Bennet in Pride and Prejudice (and Jane Austen herself for that matter), Jane Read in Arthur (yes, Arthur — children’s books count, too), and so many more. Go with a nickname, spell it differently, do whatever you want with it. It’s derived from Hebrew and means “God is gracious,” but it lends itself to so many variations.

My inspiration here was Isabel Allende, but you could also take your cues from Isabelle from Measure for Measure or Isabel Archer from Portrait of a Lady. Considered a medieval Spanish variation on “Elizabeth,” “Isabel” is a particularly “godly” name — it means “my God is bountiful,” “God of plenty,” and “God’s promise.”

Who wouldn’t want their kid to have the kind of confidence that the titular character of the children’s classic Amazing Grace has? The name’s meaning is pretty self-explanatory, but you might also opt for alternatives like Gracie or Gracelyn.

I’m getting a little indulgent here — the reason I included Viola of Twelfth Night is because she's my favorite Shakespearean heroine. But I mean, seriously — she’s not without her flaws, of course, but she’s plucky and smart, and she’s more than capable of rolling with whatever punches life might throw at her. Also, it’s Latin for “conqueror.” How’s that for a strong and powerful name?

May your child have the fortitude and survival instincts of the title character of Logan’s Run (both the book and the movie into which it was adapted). As a bonus, it’s a terrific gender-neutral name; it’s Gaelic, and it means “from the hollow.”

Alice in Wonderland. Alice Walker. Alice Munro. Alice Sebold. Lots of great Alices to choose from here. Or go for Alison, as in Bechdel, or O’Sullivan from Enid Blyton’s St. Clare series. There are tons of literary Alices, Alisons, Allisons, Adelaides, and more, both fictional and real life — all of them worth of such a noble title. I mean that literally, by the way; “Alice” is German in origin, and it means “noble” or “of the nobility.”

No list of names for bookish women would be complete with a node to Jean Louise “Scout” Finch of To Kill A Mockingbird. Not only is Scout a voracious reader, but moreover, she does it — and pretty much everything else — on her own terms. One of the meanings of the name is “to listen” — exactly what one does when taking in a story.

Heck, why not go for Harper while you’re at it? Harper Lee is definitely a worthy name inspiration, too.

As in Eliot, also known these days by her given name of Mary Ann Evans. The Middlemarch author was notable both for the success of her work during a time in which women were not often taken seriously — which, indeed, was why she wrote under a pseudonym in the first place — and for the psychological analysis present in the work itself.

Sure, you could go for a feminine form of the name (Georgiana, Georgina, Georgia, or what have you); all of them are lovely. But there’s no reason why George couldn’t be a gender-neutral name if you want it to be. For the curious, it means “farmer.”

You know who Athena is, right? Good. You could go for Minerva, too, and then you’d have the double meaning of the goddess of wisdom and Minerva McGonagall.