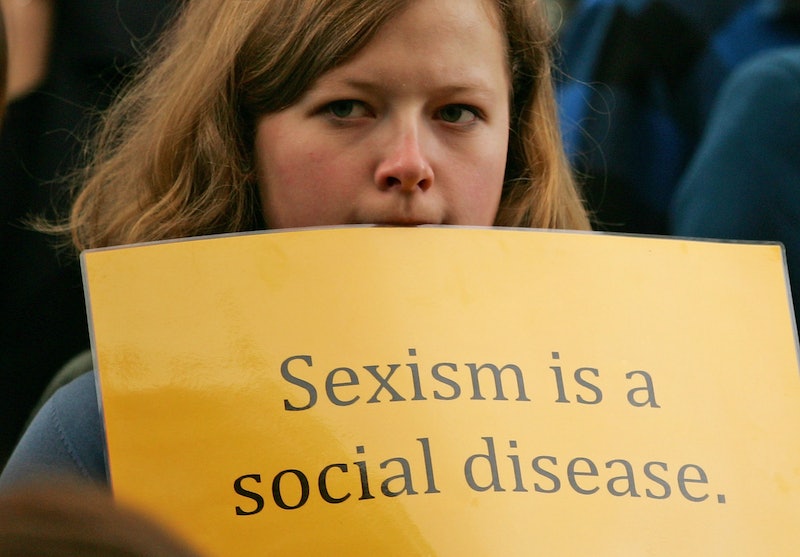 As a recent article in The Guardian points out, women are often taught to brush sexism under the rug. Among the sexist incidents we're taught to make light of are sexual harassment, misogynistic comments, and sexual violence. Writer Rose Hackman points out that women often get in the habit of "de-escalating situations caused by men, with the burden of minimizing incidents being placed squarely on our shoulders." This pressure to de-escalate sexist incidents can be dangerous, since it not only permits each isolated incident to happen but also contributes to an environment where we're punished for speaking out against sexism.

Hackman writes about a time when a family friend made a comment about her body and touched her non-consensually. "I avoided proximity to the patriarch for the rest of the night. Worse, for the rest of the evening, I kept smiling and stayed polite while making a note to do everything in my power to avoid seeing this man ever again," she says. "Years later, I realized the abuse was less in the act I had been subjected to, and more in my learned silence. De-escalation had been my trick, to the detriment of my agency."

All too often, the silence we're expected to exhibit after a sexist incident is as painful as or even more painful than the incident itself. So, here are some situations that we absolutely should not have to make light of, because misogyny is definitely a serious issue.

When we're trying to walk down the street and somebody catcalls us, whistles at us, or follows us, we're taught that it's a compliment. We're taught not to get bent out of shape because these comments and behaviors don't pose a "real" threat. But that's not how it feels when a strangers is commenting on your body or invading your personal space. It can feel threatening and make you wonder what else that stranger is capable of — and, indeed, it might be a precurser to a verbally or physically violent incident if we don't respond the way the harasser wants us to. Street harassment contributes to a culture where women take their keys out before they reach their homes in case they encounter someone violent, where women try to dress modestly so that people will leave them alone (although even this is not a guaranteed defense against street harassment). When a behavior limits women's choices, it's a serious problem.

When a victim tries to report a sexual assault, they're subjected to a process frequently considered just as bad as the assault itself. People who hear about the story often blame them, the authorities meant to help them often shame them, and they may even grow to blame themselves for the assault. Through this process, victims learn to not report their assaults or even take them seriously themselves. In fact, a U.S. Department of Justice study found that 21 percent of physically forced victims don't report their assaults because they don't think the police will take them seriously. Victims are made to feel bad about ruining the perpetrator's life rather than care about the fact that their own lives have been damaged. Instead of feeling bad for the perpetrator, we should be thinking about the victim. If the perpetrator didn't want to be held responsible for sexual assault, they shouldn't have assaulted someone in the first place.

Online harassment is a form of harassment often not taken seriously because we tend to perceive things as less real when they happen online. Our sense of right and wrong hasn't necessarily caught up with technological advancement, with the result being that people often view sending unsolicited nude photos as less of a problem than flashing someone in a public place, or see using a slur against someone on social media as less of a problem than using it in person. But the words are still the same regardless of how they're transmitted, and the ill will conveyed toward somebody through them has the same impact.

Much of the sexism we experience on a regular basis comes in the form of microaggressions — words and actions that we don't always call out because they're not overtly sexist but that nevertheless stem from and perpetuate sexism. For example, when someone tells a woman her clock is ticking and she should think about having kids soon, that's a sexist microaggression; it stems from the idea that a woman without a baby is incomplete. Jokes about women nagging their husbands or men being unable to do household chores also fall under this category. When we get comments like these, we're supposed to just nod politely or laugh them off, or else we're the ones "making a scene." We shouldn't have to feel responsible for not making a scene, though; the scene began when someone else decided to be sexist.

If we point out sexism in a movie, a song, or a TV show, especially an otherwise good one, we're often made to feel like party poopers interrupting everyone's enjoyment. We're told we're being too sensitive and that we should just enjoy it. After a number of celebrities boycotted this year's Oscars for excluding people of color, for example, a variety of other celebrities responded with some troubling comments which minimized and dismissed the issue. But it's hard not to see the media's sexism and racism as real when you're its target, and it's possible to both enjoy something and find it problematic. Criticizing people for pointing out problems with our culture is shooting the messenger, and instead of being gaslighted for doing this, our ability to observe and think critically about the issues around us should be celebrated.