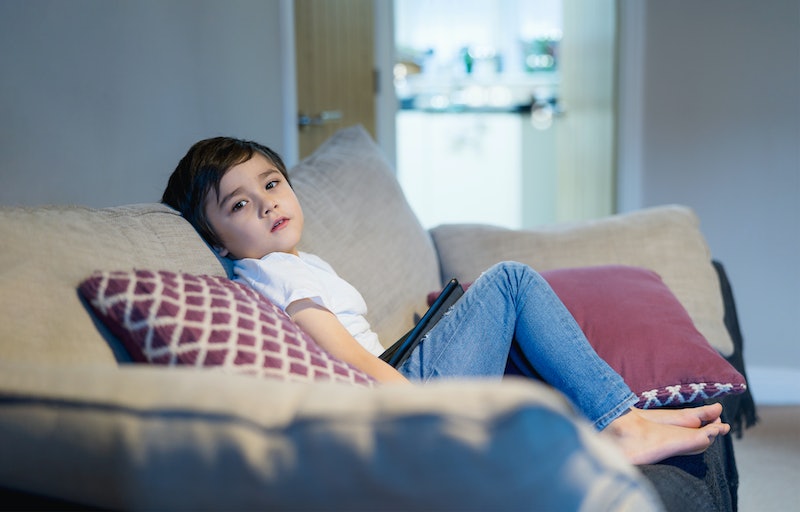 I've written quite a few articles about all the sexist things women encounter from girlhood that men and boys pretty much never have to deal with — because there are a lot of them, and they all suck. In fact, the first article I pitched to Bustle was about how much I hope my nieces get to grow up in a less sexist world than I did. Until recently, however, I'd never considered writing about all the ways any future nephews or sons of mine might be verbally bullied into gender stereotypes, too. Last winter, all of that changed when my sister told me she and her husband were trying to adopt a little boy. Sadly for her, the adoption fell through — but that hasn't kept me from thinking about all the sexist things people say to boys that they don't say to girls.

Obviously, I'm not trying to say that cisgender men and boys have been systemically oppressed based on their assigned gender in the same way that cisgender women and girls have. No matter where you live, being assigned male at birth comes with a lot more perks than being assigned female, and suggesting otherwise would be ridiculous and historically inaccurate. Also, in my experience, sometimes the things people only say to boys are awesome. Unlike the boys I grew up with, not once during my childhood did I hear: "You could be the next president of the United States!" No one ever told me that my snazzy church clothes made me, "look like a little CEO," either.

All of that said, as a feminist, I think it's important to remember that gender inequality negatively affects all of us. Whether it be reinforcing negative stereotypes about girls, or discouraging boys from being emotionally vulnerable, these five sexist things boys hear when they're growing up harm everyone.

I will never understand why boys are ostracized for growing their hair out while girls are told things like "A woman's glory is in her hair." Particularly because, historically speaking, short hair hasn't always been the beauty standard for men. In fact, back in the 1600s, long hair was a sign of status for men — which is why all those old school portraits of noblemen feature them wearing long wigs. Sadly, though, these days boys with long hair are bullied for appearing "too feminine" — as if looking feminine is the worst thing a boy can do.

Though there's no denying that girls are typically body-shamed far more than boys are, the fact that boys (and parents of boys) are ridiculed for allowing their hair to do what hair does — grow — perfectly illustrates why male body positivity matters, and why we all need to stop telling boys to chop their hair off the second it starts looking pretty.

People say this crap to boys all the time, and it's damaging to everyone for several reasons. First of all, it encourages the mindset that girls are inherently weak and bad at sports, which is total bullsh*t. Secondly, attempting to motivate young boys by insulting young girls is also bullsh*t. Lastly, comments like these pressure boys to be good at sports whether they want to be or not — as if being fast, strong, and good at hitting people is what masculinity is all about.

According to a study which was conducted by Harvard Medical School and Boston Children's Hospital back in 1999, six-month-old boys actually cry more than baby girls do. So it's perfectly natural for boys to cry and show emotion, but our society socializes boys to be less vulnerable than girls anyway. Not only is it unnatural to discourage boys from being emotionally honest and expressive — it can be dangerous as well.

Teenage boys and men who are suffering from depression are more likely than women and girls to self-medicate with drugs and alcohol. And in the U.S., men die from suicide more than three times as frequently as women do, despite the fact that depression is twice as common in women as it is in men. A culture that discourages men from expressing their emotions also leads to a culture of toxic masculinity and violence.

OK, first of all, this a dumb thing to say, because colors belong to everyone. Also, there's nothing wrong with looking like a girl, because girls are awesome. Finally, discouraging boys from wearing pink because it's officially a "feminine color" doesn't make sense from a historical perspective. As Mental Floss reported last summer, in the early 1900s, pink was considered a more masculine color than blue. If you don't believe me, maybe this snippet from the 1918 trade publication, Earnshaw's Infants' Department, will convince you: "Pink is for the boys, and blue for the girls. The reason is that pink, being a more decided and stronger color, is more suitable for the boy, while blue, which is more delicate and dainty, is prettier for the girl."

According to Mental Floss, although advertisers started marketing all things female in varying shades of pink shortly after World War II, the whole pink-is-for-girls thing didn't really happen until the 1980s. It was around this time when more and more parents started finding out the gender of their unborn babies, and in their excitement, many of them wanted to buy gender-specific items for their little bundles of joy. So, clearly, telling boys that "pink is for girls" is not only limiting, sexist, and stupid — it's just flat-out incorrect, and it's a phrase that needs to be retired ASAP.

In my opinion, this is probably the worst thing we say to and about boys, because it's downright dangerous. Suggesting that boys and girls should be held to different behavioral standards perpetuates rape culture from childhood, it contributes to our society's propensity to blame women for the violent actions of men, and it teaches boys that part of being male is never having to apologize.

This saying essentially conditions boys to believe that they don't truly have power over themselves, that self-control equals weakness, and that they're entitled to the forgiveness of women — and society in general — no matter what. What's worse is, at some point, "boys will be boys," turns into, "that's just how men are." The phrase sells everyone short.