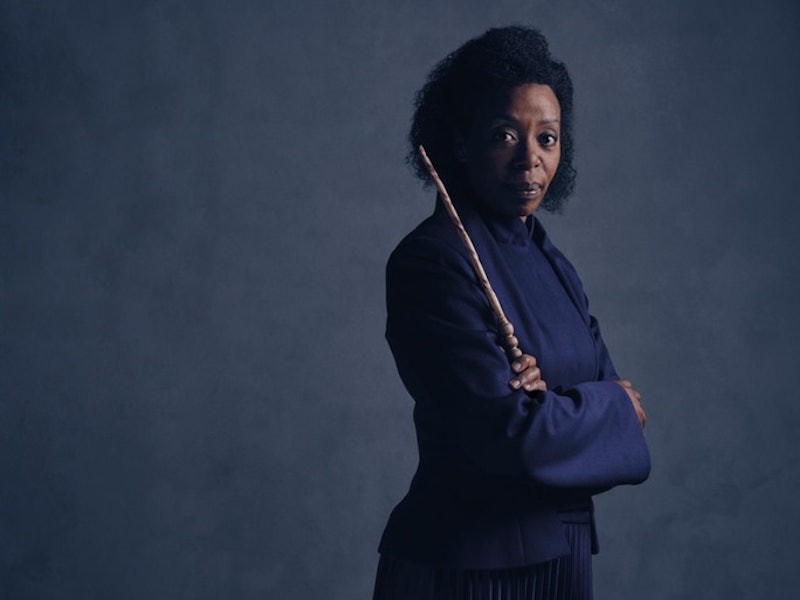 Like most people with two eyes and a heart, the first thing that I did on July 31 was stay up all night reading the script of Harry Potter and the Cursed Child. I'm far too poor to hop a flight to London to watch the play, so reading it was the next best thing. However, Hermione Granger's plot in Cursed Child went from good to horrific to good again in one sharp swerve that was totally unnecessary. Essentially, one memorable section of the play implies that Hermione would be a bitter shrew without Ron, because his affection was the only thing keeping her from devolving into abusive behavior and giving up on her dreams. No, really.

Spoilers ahead. When Albus Potter and Scorpius Malfoy use a stolen time-turner to go back in time and prevent Cedric Diggory from passing the First Task so he won't die in the Triwizard Tournament, their use of Durmstrang uniforms as disguises cause Hermione to become suspicious of the school as a whole. For that reason, she never goes with Viktor Krum to the Yule Ball, Ron never sees her there with Viktor and gets jealous enough to realize he has feelings for her, and Romione never happens. Instead, Ron eventually marries Padma Patil, his Yule Ball date in the original timeline, and Hermione becomes a bitter, hateful Defense Against the Dark Arts teacher who is still in love with Ron and treats her students even worse than Severus Snape ever treated his own.

You might think I'm being overly dramatic, but I'm really, really not. In Act Two, Scene 11, where Albus first encounters this version of Hermione, he asks what she's doing at Hogwarts, to which she responds, "Teaching. For my sins." When he continues to be confused about the situation, she later takes "10 points from Gryffindor for stupidity" and "20 points from Gryffindor to assure Albus Potter that I am this mean." She even insults him further, stating, "Just keep quiet, Potter, otherwise you'll lose what limited popularity you have." In case you somehow don't get the point, the stage directions literally state: "She really is quite mean."

Act Two, Scene 16, Scorpius Malfoy explains the entire situation to Albus, and to the audience:

SCORPIUS: Ron took Hermione to the ball... as friends. And they danced in a friendly way, and it was nice, and then he danced with Padma Patil and that was nicer, and they started dating and he changed a bit and then they got married and meanwhile Hermione became a—ALBUS: —psychopath.SCORPIUS: ...without Krum, Ron never got jealous and that jealousy was all-important and so Ron and Hermione strayed very good friends but never fell in love — never got married...

Neither boy seems to find anything at all strange with this scenario, but as a longtime Hermione fan, I have so many questions. In the books, Hermione not only had a brief relationship with Viktor, but also went out on a date with Cormac McLaggen, if only to make Ron jealous. She had absolutely no trouble attracting boys when she wanted to, and yet Cursed Child seems to imply that if Ron had never noticed her romantically, then no man would have ever noticed her romantically. And I would be all right with that, as her love life is far from the only important thing about her character, if it weren't for the implication that no man noticing her (especially Ron) would turn her into a "psychopath." Scorpius says that she and Ron are still close friends, so what cause would Hermione have to be so "mean"? And even if they weren't still friends, why would Hermione's entire personality have changed so drastically over a guy? Why is Ron allowed to move on and have a wife and a child (even if part of him still longs for Hermione), while she's never allowed to let go?

And what cause would she have to become a Defense Against the Dark Arts teacher? From a young age, she wanted to reform the wizarding world and make it a more hospitable place for Muggle-borns like herself and for magical creatures like the house elves. Why does removing Ron as a romantic partner change her to such a point where teaching Defense Against the Dark Arts — a subject that Hermione was never particularly interested in the way she was in, say, Arithmancy — would be where she ends up? I'm not trying to cast negative aspersions on the teaching profession, but Hermione was Minister of Magic in the original timeline — a much more powerful position, and one more in line with her ambitious need to prove herself and find a place in the wizarding world where she could affect the greatest change for all. I'm uncomfortable with the idea that Hermione needs Ron to love her in order for her to become Minister of Magic.

It's not that I don't understand what Rowling and playwright Jack Thorne were trying to do. There's a clear parallel here between Hermione and Snape. Losing the love of his life, Lily Potter, through his own disgusting actions caused Snape to fall even further onto the wrong path. Even when he switched sides to serve Dumbledore, he treated children so viciously that the 12-year-old Neville Longbottom (whose parents had been tortured into insanity, and whose great uncle had — accidentally — dropped him out a window to activate his childhood magic) considered Snape to be his greatest fear. Clearly, Ron is meant to represent to Hermione what Lily represented to Snape: the closest thing to a conscience that they had, and the only bright light keeping them from a lifetime of misery and miserable behavior.

But that doesn't work within the context of Hermione's character the way it works for Snape's. Snape was the product of an abusive home, and was bullied and harassed at school as well. Lily and the future Death Eaters were the only ones who valued him and treated him with kindness. Without her, he lost the last tie connecting him to any chance of being "good" — a symbolic role that Lily not only didn't want, but actively resented having if he wasn't going to treat all people and Muggle-borns with the same kindness he treated her.

In contrast, Hermione comes from what by all appearances seems to be a good home, and while she experienced some isolation and bullying (especially at Ron's hands) early in her first year, the infamous altercation with a troll on Halloween turned Harry and Ron into her lifelong friends. In addition, after Neville and Harry, she was the most frequent target of sneering remarks from Snape for answering questions in his class — behavior that she was frequently and vocally opposed to. (You don't suspect your teacher of cursing your friend's broom and set their robes on fire during a Quidditch match if you think they're a good and admirable person, after all.) The fact that she would turn around and treat children the way that Snape treated her, just because Ron never loved her romantically, is offensive to the character we all grew up admiring.

The fact of the matter is that Ron and Hermione don't need to be a couple for Hermione to achieve great things. Cursed Child even inexplicably makes that clear with yet another alternate universe, in which Harry was killed at the Battle of Hogwarts and Hermione and Ron are fighting the good fight while hiding from Voldemort's forces. Hermione seems a lot less mean in this universe, despite the fact that she and Ron aren't together. I'm not sure if there really is a difference in the scenarios — like, for example, does the fact that Ron remained single in that universe allow for Hermione to remain heroic due to the hope that one day they might still sort things out? — or if it's just the fact that being on the run makes it hard for a bitter Hermione to get a job as a teacher.

Ultimately, it's interesting to see how even the smallest of factors have a ripple effect on the Harry Potter universe that we all know and love. But to suggest that Hermione would become the world's most sadistic teacher just because Ron doesn't like her? That's the one thing I won't accept.

More like this
10 Must-Read New Books Out This Week
By K.W. Colyard
'Bridgerton' Star Nicola Coughlan Confirms Season 3 Will Focus On Colin & Penelope
By Grace Wehniainen and Alyssa Lapid
Candice Carty-Williams’ 'People Person' Tackles Daddy Issues With Warmth
By Sam Rogers
'Derry Girls’ Dylan Llewellyn Will Star In C4’s New Queer Comedy
By Rachel Mantock
Get Even More From Bustle — Sign Up For The Newsletter