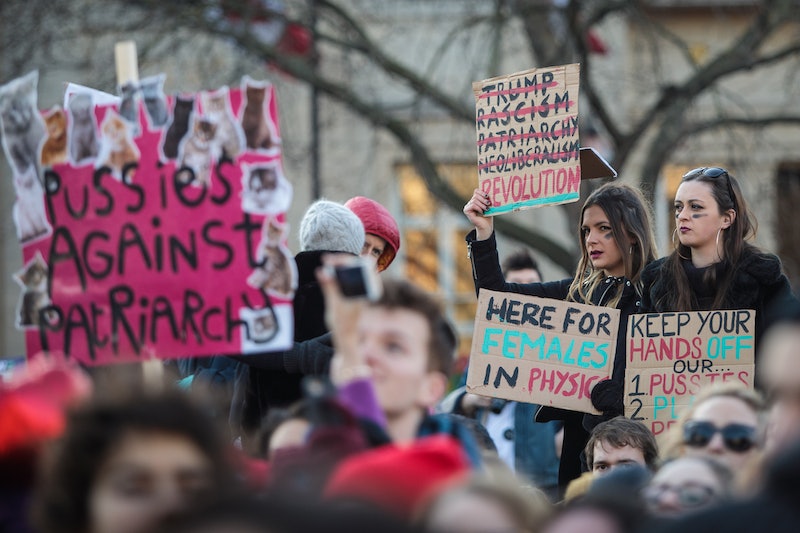 When people identify themselves expressly as "not feminist," it's not unusual for them to offer explanations like "I embrace my femininity," "I love men," and "I believe in equality." It's worth noting, though, that believing any of these things doesn't actually mean you're not a feminist. While everyone can obviously choose to identify as they wish, whether that's as a feminist or not, nobody should feel like they can't identify as a feminist for these reasons — because feminism includes a wide range of people, including the people these statements apply to.

Feminism, according to its dictionary definition (via Google), is "the advocacy of women's rights on the grounds of political, social, and economic equality to men." Beyond that, though, it's also the advocacy of rights and equality for all marginalized groups — what we call intersectional feminism, which understands that systems of oppression overlap, and that within the larger movement, there's a virtually endless array of different experiences which might therefore require a wide variety of different solutions. What's more, you can advocate for these rights no matter who you are. It's common to hear both celebrities and everyday people disavow feminism in favor of "humanism" or "equality." But this disavowal is based on untrue stereotypes about feminists — and often even perpetuates them.

But identifying as a feminist shouldn't require you to compromise any of your other values, because it's not necessarily an either/or situation, but rather a situation that says, "Yes and." Here are some reason I've heard people give for not identifying as feminists — and why they don't actually prevent you from being one.

1. Because They Care About More Than Just Women

Sarah Jessica Parker said in a recent Cosmopolitan interview that she's not a feminist because she cares about "people of color, gays, lesbians, and transgenders who are carving out this space. ... I don't think it's just women anymore." And she would be right that it's not just women. But intersectional feminism has done a lot for other groups as well. Feminism has challenged gender roles, stereotypes, and the whole system of gender. These challenges to the gender binary have fostered greater acceptance of LGBTQ people, as well as cisgender, straight men who are harmed by gender roles. And since there are many ways our concept of gender overlaps with our concept of race (for example, in the form of racist beauty standards), feminism also works to fight racial injustice. These efforts haven't always been perfectly inclusive, but there are many, many feminists who are marginalized for reasons beyond their gender and are working toward equality for these groups as well.

Lady Gaga once said, “I’m not a feminist. I hail men, I love men, I celebrate American male culture — beer, bars, and muscle cars" (though she's since said that she actually is a feminist). But it's because of feminism that women who love stereotypically "male" things can be accepted. It also doesn't make much sense to "love" any group as a whole, since we're all individuals, and no single person represents an entire group. But most importantly, feminism doesn't tell anyone who or what they can love, and it's not inherently anti-male. Many, many feminists have men in their lives whom they love. We don't love the sexism or violence that some men inflict upon women and gender-nonconforming people. We don't love the way men are taught to view women as lesser than them. But we can call these behaviors out without disavowing our love for any group of people. As Katy Perry has more accurately said, feminism "means that I love myself as a woman and that I also love men."

3. Because They Believe In Equality

A friendly reminder: Feminism is not female supremacy. It is, again, the advocacy of gender equality. Oh, how it pains me to have to say this. Feminism does not claim women are above men, because that would actually be promoting benevolent sexism — the promotion of gender stereotypes under the guise of praise. Feminism is all about getting rid of generalizations about gender altogether, including the idea that any gender is superior to another.

A friend once told me she does not identify as a feminist because she loves fashion and beauty and children and spin class, and feminism is against these things. But it isn't. It's against the compulsion for women to be like this — the cultural script that says women must be like this, while men must be into "beer, bars, and muscle cars," as Gaga so aptly put it. Feminists can wear jeans and T shirts and love sports, or they can wear pink dresses and love knitting and cooking (in fact, feminism works to combat the devaluing of these things), or they can do both, or they can do neither. The important thing is that feminism allows anybody to express their own interests and tastes, regardless of their gender.

I've heard people say they don't like to say they're feminists because they don't want to label themselves in a way that could constrain them or make them feel required to behave a certain way. And I can sympathize with that, because there are many ways I choose not to label myself. But I've also realized that if feminism as a label feels constraining, that's because of the constraints anti-feminists have placed on it. It doesn't feel constraining, I've realized, to call myself an LGBTQ ally or an anti-racist ally, so it shouldn't feel constraining to call myself a feminist either. The label "sexist" says a lot about who you are, but "feminist" says very little, because all it means is that you're not a sexist. Rather than limiting my behavior, feminism has actually freed me from a lot of societal constraints. And if it ever feels limiting, I have to ask myself whether that's my feminism, or whether it's a version someone else has defined for me. True feminism is the kind that we get to define for ourselves — and that's a label I never want to give up.

More like this
Sandra Bullock, Girlboss Extraordinaire
By Matt Harkins & Viviana Olen
25 Quotes About Love To Share During Pride Month 2022
By Madeleine Aggeler and Emma Garza
Meet The Spice Company Founder Who Sees Chai As A Metaphor
By Madhuri Sathish-Van Atta
The Church Of Scotland Votes To Allow Same-Sex Marriages
By Sam Ramsden
Get Even More From Bustle — Sign Up For The Newsletter