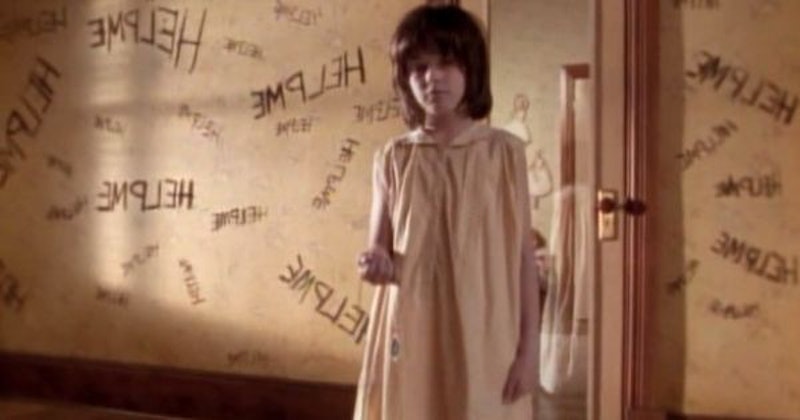 I know it’s only August, but I’m already getting super hyped up for the Halloween season. Why? Because it’s the one time of year that my bizarre fascination with ghosts and weird stuff comes in handy. Take, for example, these ghosts from the ‘90s that scared the pants off all of us when we were kids: If I’m really honest with myself, I think about these spooky, spectral figures all the time. But once the summer starts to draw to a close, the air gets crisp, and the leaves begin to change? Well, let’s just say that both my imagination and the nostalgia center of my brain go into hyper drive.

Many like to scoff at ghost stories, but on some level, I actually think we need them. Whether or not we believe in them, the possibility that they might exist can help us cope with difficult events — or, they can help us experience the sort of risk for which we have a psychological need, but don’t always encounter in our everyday lives. And even though some might maintain that kids should be kept away from scary stuff, I think we need to start being exposed to it when we’re young, too. Psychologist Bruno Bettelheim was right on the money with his 1976 book The Uses of Enchantment: The dark themes of fairy tales do let children begin to learn how to navigate their fears in symbolic terms. Ghost stories let us do that, too.

So here. Let’s take a look at just a few of the ghosts that populated a ‘90s childhood. There’s a reason we loved them so much — even as we hid our heads under the covers.

“The Tale of the Lonely Ghost” is one of the earliest episodes of Are You Afraid of the Dark? — the third one of the first season, to be precise — and it’s become so iconic that just this one image is enough to give most ‘90s kids nightmares. Like many of the ghosts featured in Are You Afraid of the Dark?, this one wasn’t malevolent; she just wanted a friend. Unfortunately, she had a truly horrifying way of asking for it.

But that’s far from the only Are You Afraid of the Dark? ghost most of us found absolutely terrifying. There was also…

Who could forget this Season 2 episode starring Melissa Joan Hart? Not unlike the Lonely Ghost, the poor dead kid in "The Tale of the Frozen Ghost" didn’t want to hurt anyone; he just needed someone to find his dang coat for him. Still, though — the number of times I stayed away from my window at night for fearing of spotting a spectral child freezing his non-corporeal butt off were too many to count.

3. The Girl With The Green Ribbon Around Her Neck

OK, to be fair, I’m not actually sure whether the Girl with the Green Ribbon Around Her Neck is a ghost or something more like a zombie; either way, though, there are few things as unsettling as asking the love of your life why she’s always worn that ribbon, only to watch her head fall off when she unties it.

The tale is an old one — Washington Irving published “The Adventure of the German Student,” which uses the ribbon-keeping-your-head-attached convention, in his 1824 collection Tales of a Traveller — but Alvin Schwartz of Scary Stories To Tell In The Dark fame terrified a huge number of ‘80s and ‘90s kids with his version, “The Green Ribbon,” in the 1984 collection In A Dark, Dark Room and Other Scary Stories.

Strictly speaking, Bloody Mary isn’t limited to the ‘90s; according to Snopes’ entry on her, research about the legend dates to 1978 and folklorist Janet Langlois’ essay “‘Mary Whales, I Believe In You’: Myth and Ritual Subdued.” But back before the internet was rife with creepy ghost games, Bloody Mary was the OG for many of us — our go-to for sleepovers and other spooky get-togethers.

5. The Many Terrifying Ghosts Of Hey Arnold!

Because somewhat astonishingly, there was more than one: Four-Eyed Jack, who conducted experiments on cooking beans in the cellar of the boarding house and died after a horrific pressure cooker accident; and the Ghost Bride (seen above), who killed her husband-to-be and her sister with an axe after they eloped right before what was supposed to be her wedding day, then jumped out a window in order to escape capture by the police. Oh, and there was a haunted train, too. Hey Arnold! was frequently surprisingly dark.

YA author Mary Downing Hahn specialized in making it impossible for kids to get to sleep in the ‘80s and ‘90s — and she’s still at it today: Her most recent novel, Where I Belong, was published in 2014. But without a doubt, it’s 1986’s Wait Till Helen Comes that most ‘80s and ‘90s kids recall with a creepy yet delicious sense of dread. Toxic friends are bad enough on their own, but when your worst toxic friend has supernatural abilities? Uh… yikes.

Also, the book was released with a new cover in 2008, and it is suitably freaky:

Or perhaps more accurately, It as depicted in the 1990 miniseries adaptation of the 1986 Stephen King novel. And even more accurately, the Pennywise the Clown incarnation of It. I don’t even know if It technically classifies as a ghost — it’s probably closer to a “demonic entity” than an a straight-up ghost — but, I mean, let’s be honest: When most people think “malevolent ghost,” they usually think of It.

8. All Those Living Dummies

In case you forgot, Slappy isn’t the only living dummy in the Goosebumps series; the main antagonist of the very first installment of Night of the Living Dummy is actually Mr. Wood. It’s only after Mr. Wood’s untimely demise that Slappy takes center stage — and as it turns out, they’re brothers, both carved from the wood of the very same coffin. We know considerably less about Mr. Wood than we do about Slappy, unfortunately — the only additional information we have is that his first name is Wally — but given that we find out later that Slappy is actually the spirit of a sorcerer living inside a ventriloquist’s dummy, I think it’s safe to assume that Wally has something similar going on. Ergo, they’re both ghosts.

And, really, they would be creepy enough all on their own, even without the whole evil-spirit-trapped-in-a-doll thing. Ventriloquist’s dummies are terrifying.

You know this story: Someone picks up a hitchhiker — often a young woman — in their car. Sometimes the driver drops her off at her home, while sometimes it’s at a cemetery; either way, though, she usually a) leaves something behind in the car, or b) accidentally takes something with her when she exits — a coat, typically. The next day, the driver heads back to where he dropped the hitchhiker off to either return what she left or retrieve their own belonging… and then discover that she was dead the whole time.

The Vanishing Hitchhiker is usually more sad than scary, but it’s spooky nonetheless — the kind of story we used to tell each other at sleepovers. It’s got a long history — the earliest versions actually date back to antiquity — but we were definitely super into it in the ‘90s. Probably movies like Urban Legend, which was released in 1998, helped.

AKA, the ghost played by Mischa Barton who appears in Cole's room in The Sixth Sense. I mean, yes, not unlike our two previous Are You Afraid of the Dark? ghosts, she wasn’t malevolent; indeed, she’s actually something of a hero — by appearing to Cole, she helped bring to light the fact that her mother actually poisoned her, saving her younger sister from the same fate. Still, though — you’d think she’d have wanted to find a less frightening way to deliver her message, right?

It’s true that the PC game The 7th Guest hasn’t aged particularly well — having replayed it last year, I can definitely attest to that fact — but at the time of its release in 1993, it was just about the highest tech thing I’d ever seen in a computer game. The story of Henry Stauf, his incredible yet deadly toys, his mysterious mansion, and the unknown fate of his guests that night always had me looking over my shoulder as I played — and I can still recite that nursery rhyme that spoke of the horrors that once occurred: “Old Man Stauf built a house, and filled it with his toys. Six guests were invited one night, their screams the only noise…”

Or whatever the heck that actually was out there in the woods of Burkittsville, Md. This is one of the many movies I watched as a kid that taught me that what you don’t see is almost always scarier than what you do see — a valuable lesson in effective storytelling.

Not going to lie: I am definitely going to see the newly-revealed sequel when it comes out. Yes, even if it’s bad. Don’t judge.