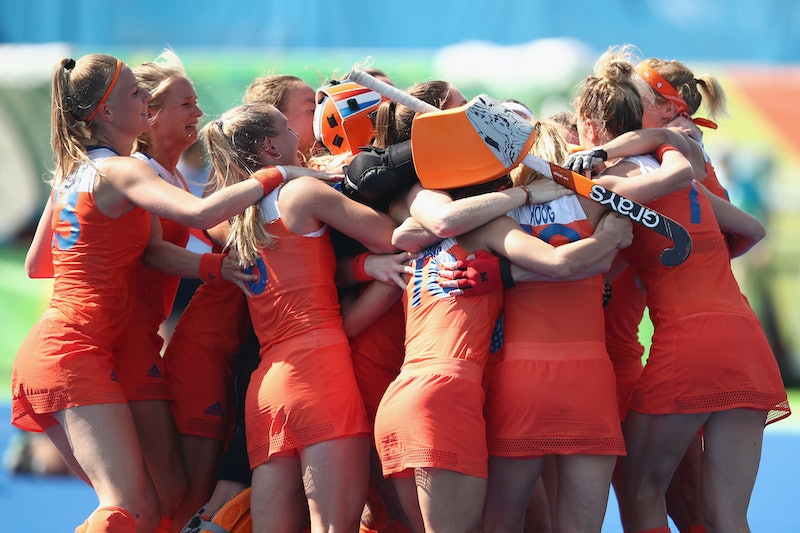 As we approach the final days of the 2016 Rio Olympic Games, it only makes sense that we focus on a very important aspect of the Olympics: Just how attractive all those athletes are. Yes, they are talented, focused, dedicated, and all the things one would probably want in a partner, but they’re all, to be honest, pretty damn hot, too. Because there’s no denying that there’s a lot of sex going on at the Olympic Village and Tinder use in and around the Olympic Village is pretty much out of control — in a good way! Tinder decided to do some analyzing on their part, as to what the hell is going on down there in regards to dating, hooking up, and right swipes.

Since the athletes descended upon Rio for the Opening Ceremony on the August 5, Tinder has been closing examining Tinder use. A bunch of athletes have admitted to using Tinder, but based on Tinder’s findings that “bunch of athletes,” appears to be more like a ton of athletes, who are swiping left and/or right in between their competitions. With all the data in the palm of their hand, Tinder was able to compile a list of what sports are getting the most right swipes, for both male and female athletes, in and around the Olympic Village.

Here are the top female sports that are being right swiped the most. Check out the most right-swiped male sports here.

Say what?! Although I’m super excited to see that swimming is on the list, why it’s not at #1 is kind of shocking to me — especially in a world where Katie Ledecky exists. The female swimmers are so bad ass and hot, and yes, I’m totally crushing on Katie and have been since this whole Olympics thing started. (I love you, Katie. Text me anytime.)

In fifth place on the list of the most right-swiped sports for women is rugby. Again, we’re looking at some really bad ass women who dominate whenever they get on the field. Have you ever tried to play rugby? It’s nearly impossible. You need to be one hell of a powerhouse.

In third place, we have the female athletes who have rowing listed as their profession on Tinder. Third place is not a bad place to be at all in regards to getting attention from fellow Tinder users... who just might be Ryan Lochte.

I wanted to join field hockey in high school, because I liked the uniform. But when I realized we’d have to run every day for like 45 minutes, I passed. But my failed attempt at being an athlete aside, the women’s field hockey players are in second place when it comes to right swipes.

First place? Table tennis. Yes, it’s the best table tennis women in the world who are receiving the most right swipes on Tinder in Rio. I’m both intrigued and somewhat surprised, but since I’m not up on the table tennis competitions, I’m going to lean toward being more intrigued.