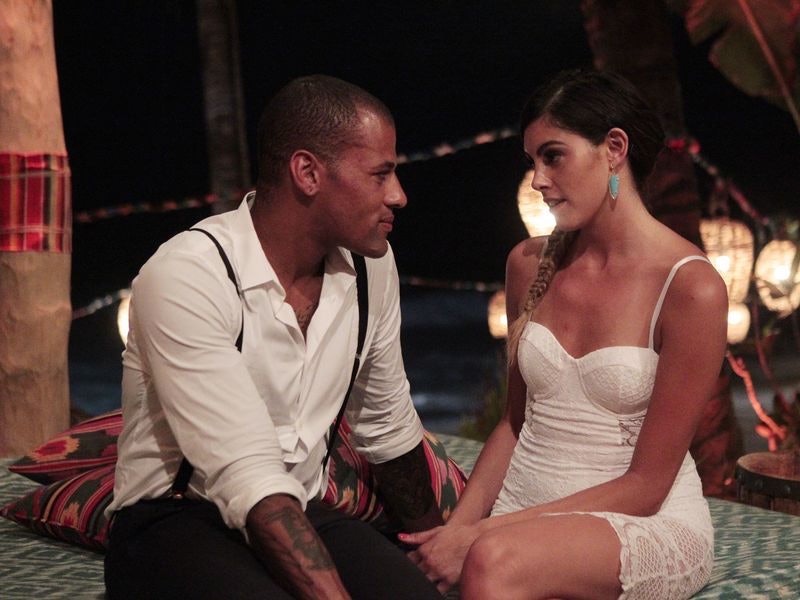 Grant became the first person to drop the L word during Bachelor in Paradise Season 3 (well, if you ignore Ashley) and while Lace didn't say it back, she said she was falling for him too when talking to the cameras. Since Chris Harrison promised multiple proposals, Grant and Lace could become engaged on Bachelor in Paradise. However, before you start envisioning Grant down on one knee, previews for the Aug. 23 episode show Lace contemplating breaking up with Grant. Izzy said anything can happen in Paradise during the Aug. 22 episode, which she proved when her interest in Brett compromised her relationship with Vinny, so will this other power couple break up or will Grant and Lace end up engaged?

Right off the bat, I was unsure of how healthy Grant and Lace's relationship was. Grant was more interested in Lace from the get-go and his emotions in the Season 3 premiere were confusing since he simultaneously seemed intrigued by and wary of her. The firefighter from JoJo's season of The Bachelorette was slightly insulting (but not wholly inaccurate) by saying that Lace was the "crazy" one of Ben's season of The Bachelor . Lace's first night in Paradise was dominated by Chad, but after she denied Chad and he was sent home by Chris for being too aggressive, Lace made a strategic move by hitting up the bedroom with Grant. While I'm not saying she wasn't genuinely interested in Grant, she stated in her camera interviews that she needed to make a big move to secure herself a rose — and secure herself a rose she did.

Since then Lace and Grant have evolved into one of the sweetest — and possibly most functional — couples in Paradise. Yet, that might not last much longer if the Aug. 23 preview is to be believed. While Izzy was lured from domestic bliss with Vinny because of a new arrival, it looks like Lace isn't necessarily going to feel tempted by another man when it comes to her relationship with Grant — she's just unsure if she's willing to commit on the same level that Grant is. In the preview for Aug. 23, she tearfully says on camera that she's not seeing them click and even gets frustrated with Grant's admission of love, meanly claiming that he repeats himself a lot.

There's another upcoming moment between these two that also makes me concerned for their future together. In the original Bachelor in Paradise Season 3 promo, Lace was shown saying to Grant, "Have fun finding love with someone else" to which he replies, "I just told you I love you." She claims in that moment that now she looks like a "b*tch," which could indicate that she isn't ready or willing to say "I love you" back to Grant.

With all of this being said, it still doesn't mean that Lace and Grant won't end up together by the Season 3 finale of Bachelor in Paradise. I just think that when you consider that Lace chose to leave The Bachelor to work on herself within the last year, that maybe she's isn't ready to accept a marriage proposal yet — even if she does fall in love with Grant.

Grant seems all in when it comes to his relationship with Lace, but these two are about to face some bumps in the road, so if they do stay together after all this, at least I can say their relationship should be the stronger for it. While I like them together, I don't think they should necessarily commit to marriage in Paradise, but clearly I don't understand the world that is Bachelor Nation since TMZ reported that Lace got a "Grace" tattoo (which is her couple name with Grant) on her wrist. So even with Grace facing trouble in Paradise, there's a very good chance that they'll leave together — and engaged.