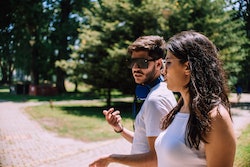 There are several phrases that, when uttered in a relationship, can make your blood run cold. Of course there's the whole breakup bomb, and the cheating bomb. But there's also the more benign — but somehow most scary? — moment when your partner asks for some space.

It's rarely as dramatic as it first sounds, but tell me it's not hard to jump to a million and one conclusions. Is she mad? Does he want to leave? These are the thoughts and worries that come to mind.

After the initial shock settles, however, it's often quite easy to see that giving each other space is actually a good thing. In fact, time apart is incredibly healthy. It's only when things get excessive that you should start to think twice.

"Anything in excess can be a warning sign when it comes to mental health and the health of a relationship," Dr. Kim Chronister, a licensed clinical psychologist, tells Bustle. "If a partner is asking for time away for an extended period of time to the point that the relationship is suffering, it should be addressed."

When something like this crops up, you'll want to talk about it ASAP, while also being open to understanding each other, and honoring requests for a little more space. Read on for some ways to do just that, so you two can maintain a healthy, happy relationship.

1. Remember This As A Positive Thing

Getting excited about spending time apart is way easier said than done. So it can help to keep in mind that time apart is actually a good thing. "It is healthy to have some separate interests and activities and to come back to the relationship refreshed and ready to share your experiences," said Maud Purcell, LCSW, CEAP, on PsychCentral.com.

"Your partner is telling you they need something, so it’s time to listen carefully," said therapist Gina Senarighi on eHarmony.com. They aren't asking for alone time to hurt you, or to purposefully make life difficult. They're asking because they genuinely need some alone time. Being respectful of that — and the fact they were brave enough to ask you — is the best reaction.

3. Do Your Own Thing

As Chronister says, "One of the most critical elements of happiness according to positive psychology is having a solid identity." And since it's no secret that being in a relationship blurs those lines, why not use this time to your advantage? Go out, take a class, read, try something new — anything that will put you back in touch with yourself.

4. Have An Agreed Upon Timeframe

Does your SO need an hour, a day, a few days? Be upfront with each other about how much time you expect to spend apart. Being on the same page will prevent your feelings from getting hurt, while also allowing your partner enough time to recharge.

Does giving your partner "space" stress the hell out? If so, be honest with yourself. As relationship expert Kristina Marchant said on YourTango.com. "... provide room to feel all of those panicky feelings. Don't act on them, but feel them; be a witness to them happening inside you and respect them without self-judgment." It's better than needlessly tamping things down.

6. Tell Your SO How You Feel

In the same way you're respecting your partner's need for space, he or she should respect you end up hating it. "Tell your partner what is going on for you in an honest direct way," said Senarighi. "Honesty is the best policy in this situation."

If your SO needs space, actually give them space. "When they say they don’t want to text, don’t text. If they need two weeks, respect their request for two weeks," Senarighi said. By ignoring the "rules," you're not actually giving them what they need.

8. Be As Encouraging As Possible

Even if you're kind of torn up about it on the inside, but on a brave face on the outside. Even go so far as to encourage your SO to take time away. "In my clinical opinion, it is important for a partner to encourage the other to take space for activity, socialization, and activities that lead to meaning and purpose," Chronister says. "The more solid a person's identity is, the more likely they will be happy in a relationship."

As I said above, having some "me" time will remind you of your own identity. And that's a good thing. But I get that sometimes the loneliness is all you can think about. "In moments when you are lonely be especially kind to yourself, take a long run or a hot bath, call a friend, watch a movie, eat something good for you," Senarighi said. "Treat yourself with great kindness."

10. Have Fun When You're Reunited

If your boyfriend or girlfriend put you at arm's length for a second, then you may very well feel some sense of anger or resentment. Fair enough, and be sure to take about it. But don't let it sully your reunion. "Give [them] the space to miss you and then make the time you have together positive and high quality," suggested Sherrie Campbell, Ph.D., on HuffingtonPost.com.

11. Figure Out What This Means To You

Healthy couples give each other space to have hobbies, friendships, and a life outside the relationship. Unhealthy couples, on the other hand, are often just pushing each other away. If you feel like that's the case with your SO and all they're "alone time," then be sure to have a chat. After all, this is also a time for you to figure out what you want.

But if you guys stay on the same page, you can spend a healthy amount of time apart and reap all those alone time benefits.