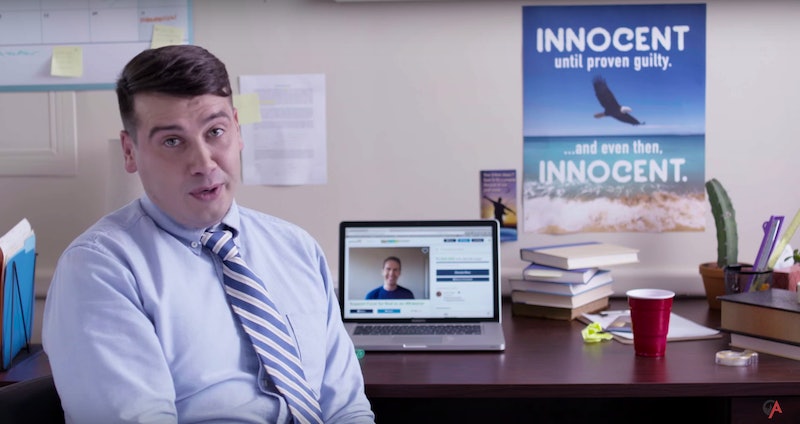 In the media, the courtroom, and all over our society, there's a puzzling and disturbing tendency to value the lives of sexual assault perpetrators over the lives of victims. Above Average's "Rapists Now Have Their Own Recovery Center" video, written by Above Average staff writer Zoe Schwab, draws attention to this pattern by depicting a satirical rehabilitation center for convicted rapists. "We're committed to helping the real victims, rapists," the narrator says. "Your future doesn't have to be a poopsy because of one past oopsy." We're laughing so hard we're crying!... No, wait, we're actually just crying. The video highlights some of the worst problems of rape culture, making it a stark reminder of how much work there is to be done to dismantle it.

While it's true that people should be treated as innocent until proven guilty and perpetrators of crimes are still human, people always seem to fixate on these facts and forget about the victim when the crime in question is sexual assault — or worse, blame the victim for their own assault. Even though the false accusation rate for sexual assault is similar to that for other crimes, for example, people constantly question whether alleged victims are lying. In addition, we often hear about people convicted of sexual assault — most recently Brock Turner and Austin Wilkerson — getting more lenient sentences than are typically recommended, with the judges citing concern about the effect prison will have on the perpetrators of the crimes. This fact is made all the more troubling by its lack of concern for the effect being assaulted will have on the victims — effects which will likely span their entire lives.

While Above Average's video may be funny, that's because it's all too true. Here are some sad realities about rape culture that it reflects.

Perpetrators Are Often Depicted As The Real Victims

"If you've ever been affected by rape, you've probably felt sullied, manipulated, and powerless," the narrator of the video says. This tendency to sympathize with perpetrators often manifests in court. After Austin Wilkerson was convicted of sexual assault in August, District Judge Patrick Butler spared him prison time and instead sentenced him to a two-year program that lets him leave during the day. "I've struggled, to be quite frank, with the idea of, 'Do I put him in prison?'" Butler said when announcing the decision. "Mr. Wilkerson deserves to be punished, but I think we all need to find out whether he truly can or cannot be rehabilitated."

The skills taught by Second Chances include "crafting a vague non-apology," "forming the right witch hunt narrative," and "finding that one celebrity who's weirdly willing to go to bat for you." This reflects the reality that people guilty of sexual assault are provided with undeserved resources. Brock Turner, for instance, got help from drummer Leslie Rasmussen, a friend from his childhood who wrote a letter to the judge defending him, which may have contributed to the fact that he only spent three months in prison. "Once everyone forgets about it, you can resume the great life that's owed to you," the narrator of the video says — and it seems like that's the track Turner's on.

Victims, On The Other Hand, Don't Always Receive As Much Sympathy

"Second chances are hard to come by, but when they do, they're strictly reserved for people who need them the least," the narrator says at the end. And the people who need a second chance the most — the victims — don't get them because their lives are irrevocably changed forever.

While Judge Aaron Persky was worrying about the "severe impact" a longer sentence would have on Brock Turner, his victim was suffering multiple traumas: The trauma of being sexually assaulted and the trauma of hearing people downplay the assault and defend the perpetrator. According to a study in the McGill Journal of Medicine, about half of women who have experienced sexual assault suffer from PTSD. Yet rather than sympathizing with them, people question and blame them, making matters worse. "I was not only told that I was assaulted, I was told that because I couldn’t remember, I technically could not prove it was unwanted," Turner's victim read in a statement in court. "And that distorted me, damaged me, almost broke me."

One of the fictional rapists in the video talks about going on to work for a bank in an office where he's allowed to drink. Another doesn't even have to pay to stay at Second Chances, thanks to a GoFundMe page. And, relevantly, all the men at the center are white. This calls attention to the fact that wealthy white men from privileged backgrounds are often the ones who get off the easiest after being accused of crimes and are depicted in the most sympathetic ways. For example, it wasn't until after his sentencing that Brock Turner's mugshot was released. "While black people involved with some sort of legal and/or criminal issue – even black people actually victimized by the police – regularly have their mugshots circulated, Brock Turner’s smiling and suited up yearbook photo was the prevailing image of him," Damon Young pointed out in The Guardian .

The prospect of a rapist recovery center may be funny, but the problems it reflects are serious. Watch the full video above, and prepare to both laugh and cry.