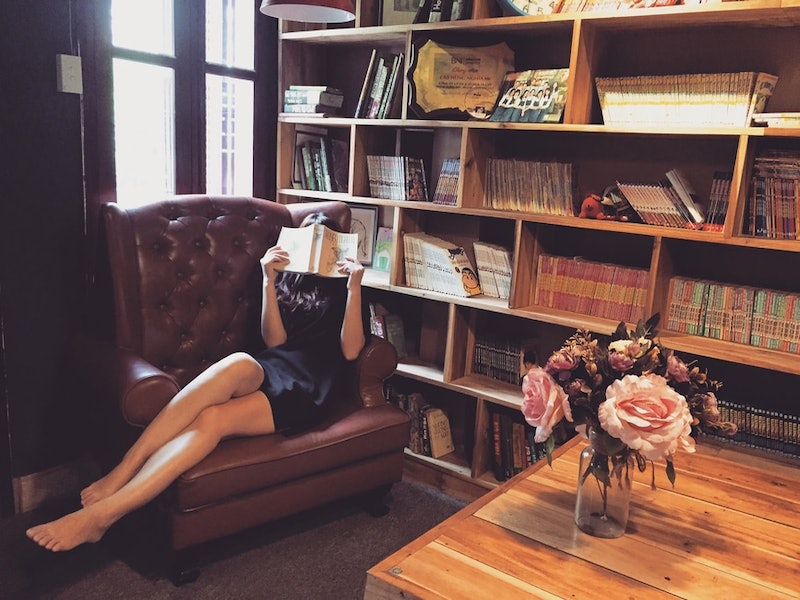 No one ever believes me when I say I'm an introvert. I'm outgoing, I like to talk (a lot), and I'm often out schmoozing at parties or making jokes in the center of a group of people. If you go by the typical definition of an extrovert, then I agree I'm it. But that's one of the ways introverts are totally misunderstood.

The classic understanding of extroverts is that they are the loud, life-of-the-party types. Introverts, on the other hand, are known as the quiet ones in the corner. (Or the quiet ones hiding at home.) But that's not exactly how this whole introvert/extrovert thing works.

A better definition lies in how a person feels socially, as well as what they consider energizing. "[The] mainstream understanding of introversion is a shy, withdrawn, antisocial individual who doesn't have a lot of friends," says Dr. Michele Barton, of New York-based Behavioral Associates Health Psychology and Wellness Center, in an email to Bustle. "[But] one psychology school of thought defines [introverts] as a person who turns inward to derive strength, peace, balance, and this completely dispels the mainstream definition."

In other words, introverts do have friends, and we do enjoy going out — as long as it means we can quickly go back home again to process, to relax, and to decompress. My fellow introverts will agree that, without this time, life starts to feel draining and overwhelming. This doesn't always make the most sense to others, and often means introverts are misunderstood. Read on for some of the ways being an introvert can be quite the pain.

This is a term that often gets thrown around in convos about introverts, mostly because people think it means shy or quiet. But that's not right at all. "Antisocial individuals lack insight into their own feelings and often use the feelings of others to manipulate situations to their benefit, with little regard for the individuals affected," Barton says, speaking about antisocial personality disorder. "Introverts very much consider feelings, they are not manipulative, or malicious." So "anti social" isn't exactly right.

Yes, some introverts are shy. But others just need time to decompress. Personally, I have a few good hours in me before I need to go inward and maybe, you know, stare at a wall for a few hours. People can read this as shy, but it's definitely just exhaustion.

As far as friendships go, newer friends can feel a bit confused by your lack of desire to hang out 24/7. Older friends, however, know they've likely just caught you at a bad time. They also know that you are one heck of a good friend. This is due to an introvert's ability to be introspective, Barton tells me. It makes them kind and patient friends, and ones who are always willing to listen.

4. No One Thinks You Can Be A Leader

Maybe you aren't the first to speak up at work meetings, but that doesn't mean you can't run that sh*t. "Despite the belief that introverts are so quiet that they can’t step up to the plate ... under the right circumstances they can be the best leaders of all," said Susan Krauss Whitbourne, Ph.D., on Psychology Today. "If the group is ready to lead itself, then the introverted leader will draw the most potential out of them." Again, all thanks to that healthy dose of intuition and insight.

5. Some Think You're Kinda Rude

Introverts tend to get lost in their heads a lot. "We can spend hours just roaming about thinking things over and running through old experiences," said lifestyle writer Paul Hudson on EliteDaily.com. And this can make for many an awkward encounter. Think of all the times someone tried to talk to you and you didn't even notice. See what I mean? Rude things happen, even though it wasn't your intention.

6. Everyone Assumes You'll Go Along With The Flow

While you're definitely easy-going, people assume this means you'll be swept along with the flow. Little do they know that you've got some pretty strong ideas bubbling beneath the surface. "Introverts do not concern themselves with what the majority is doing," said health expert Dan Fries on Collective-Evolution.com. "Instead, they have a high level of creativity and constantly think of new ideas and they work hard to implement them."

Remember how I said I'm often schmoozing at parties? I sometimes truly love being the center of attention, as do many other self-professed introverts. "In fact, some of the most successful performers are introverts," said healthy living editor Alena Hall on HuffingtonPost.com. "Remaining on a stage, removed from a massive audience, proves far easier than the small talk-filled conversations that follow." Pretty weird, right?

8. No One Expects You To Work Well In A Group

With all of those off-in-your-head tendencies, others might not peg you as a much of a team player. And yet that's pretty far from the case. "Introverts can get along well with most people so they usually encounter little difficulty when working in a team," said Fries. In fact, I'd go so far as to say introverts work better on a team since they are willing to sit back and listen to others.

9. Everyone Thinks You're Pissed Off

Introverts get easily overwhelmed public, and therefore venture out into the world armed with headphones and a fifty yard stare. As Whitbourne said, "Whether it’s making your way through a crowded bus station or just navigating a crowded street, if you’re an introvert you most likely don’t seek a great deal of contact with others." This standoffishness means people will part the way and let you pass, assuming you're pissed off. But I swear, it's not always the case.

10. You're Often Thought Of As Aloof Or Disconnected

We've established that introverts prefer to keep to themselves. And that's totally OK. But in a social world like ours, this can leave others with the impression that you are some kind of loner who prefers the fringes of society. While partially correct, it certainly doesn't mean you dislike people. Explaining that this isn't true, however, can often prove difficult.

Signs of depression include retreating from society and losing interest in your daily activities. So it makes sense why your friends and family might assume you're going through some kind of internal struggle — even when you're not. It can be tough to convince everyone that's you're 100 percent fine, and would just like some alone time.

That whole convincing thing can get pretty annoying, hence why it's often such a pain to be an introvert. Same goes for all the ways we're constantly misunderstood. But, from one fellow introvert to the next, I say keep doing your thing. Hide away, be quiet, meet up with friends whenever you please — no explanation necessary.