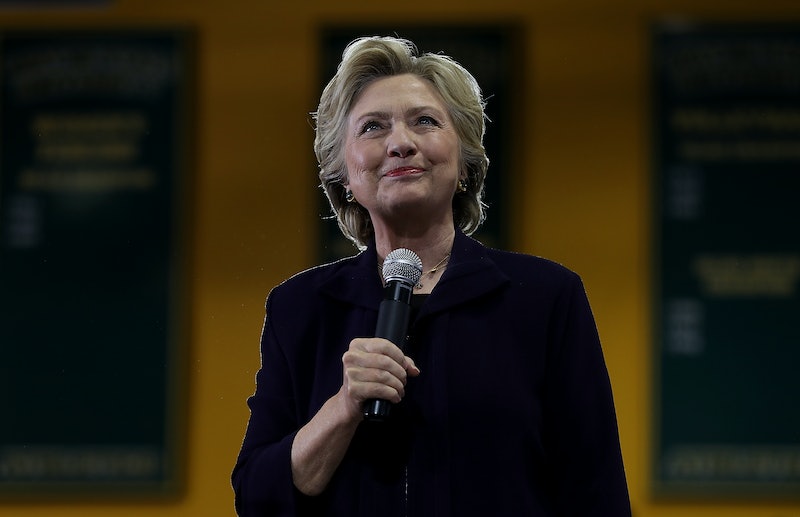 Hillary Clinton is a seasoned wordsmith — she's been speaking for the masses for nearly 20 years, so she's had a fair share of practice! Her speeches are inspirational, bold, and motivating, especially for women. She has a way of sorting out complex ideas and framing them in a digestible way so that her words don't exclude anyone. If I'm being honest, I've learned more about politics through her speeches than I have from watching the news. She just knows how to break things down without too many diversions.

There's something so kickass about hearing her talk, by the time she hangs up the mic, you're all, "I can do anything!" She truly helps women to believe that they are capable of being in a position of influence and power. Long before she was running for the presidency, she had a way with deeply inspiring words. She takes every opportunity she has behind the mic to get people excited about change and inspired by the power of women.

If you were unable to hear her during the second Presidential Debate on Sunday because a certain somebody kept speaking over her, these are some of Hillary's finest quotes, one for each sign on the zodiac:

"People can judge me for what I've done. And I think when somebody's out in the public eye, that's what they do. So I'm fully comfortable with who I am, what I stand for, and what I've always stood for. "

You're comfortable with yourself, too. You like to stand up and stand out. You can totally relate to this sentiment.

"Let's continue to stand up for those who are vulnerable to being left out or marginalized."

"We need more good jobs that reward hard work with rising wages, dignity, and a ladder to a better life."

You understand the value of hard work — it's your specialty. You stand behind Hillary's agenda of creating more jobs that have taller ladders attached to them.

"Forgiveness is a way of opening up the doors again and moving forward, whether it's a personal life or a national life."

"There's a difference between fair game and playing games."

"You know, everybody has setbacks in their life, and everybody falls short of whatever goals they might set for themselves. That's part of living and coming to terms with who you are as a person."

You're a deeply dynamic person and your life flows in all directions. Hillary understands what it's like to come across setbacks, but she also believes that they're all part of the process of becoming yourself. That's the kind of advice that resonates with you.

"The worst thing that can happen in a democracy - as well as in an individual's life - is to become cynical about the future and lose hope."

You're a passionate person. You love fiercely and you believe full-heartedly. You need a leader who can drive forward with that same optimism. You'll never lose hope, either.

"There is a sense that things, if you keep positive and optimistic about what can be done, do work out."

You believe in linear growth. Your natural mentality is that if you have hope and believe in yourself, things will move in right direction.

You love Hillary because she's independent and bold like you are. She's not afraid of her own volume and she uses it for good. You love a woman who inspires you to stay true to your own convictions.

"Every moment wasted looking back, keeps us from moving forward…In this world and the world of tomorrow, we must go forward together or not at all."

You're a forward thinker. You hate wasting time thinking about the past, it distracts you. You're all about this "Onward!" mentality. It vibes with you, just like it does with Hillary.

"I have a million ideas. The country can't afford them all."

Your mind is always at work. You're never not thinking, planning, analyzing. It's just the way you're built. You have so many ideas, you don't even know what to do with them. Hillary is the same way.

"Like it or not, women are always subject to criticism if they show too much feeling in public."

You're a peaceful and sensitive soul, but you have a lot of ideas that you want to stand up for, including gender equality. You know Hillary has the same agenda and you trust that she'll speak up for the both of you.