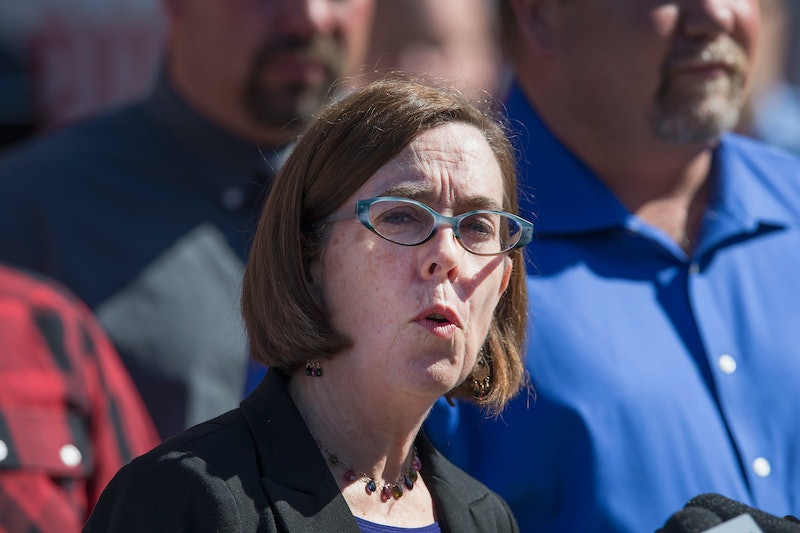 Oregon Gov. Kate Brown has had enough of Donald Trump's misogynistic rants. Now, she's speaking up on behalf of all survivors of sexual and domestic violence — including herself. After coming out as a survivor of domestic violence last month, the bisexual governor on Tuesday told The Washington Blade that Trump's hateful comments are "re-traumatizing" for victims of abuse.

In a Tuesday interview with the Washington, D.C.-based LGBT outlet, the 56-year-old Democrat hit the nail on the head when she called out the far-reaching impact of the Republican candidate's recently unearthed 2005 comments, where he boasted about sexually assaulting women.

“I think for all us who have been through incidents of domestic violence or sexual assault the words are re-traumatizing," Brown told the Blade. "And I think, unfortunately, for women across the United States, it’s all too common to hear words like this from men in places of power.”

Brown, who is openly bisexual, was speaking from personal experience, as she revealed last month during a debate with her Republican challenger, gubernatorial hopeful William "Bud" Pierce on Sept. 30. Responding to a question about improving the lives of Oregonian women, Brown told the audience that she was a victim of domestic violence (her campaign has confirmed the allegation and clarified that the abuser was not Brown's husband, but declined to offer additional details).

In response to Brown's disclosure, Pierce declared that "a woman that has great education, great training, a great job, is not susceptible to this kind of abuse by men, women or anyone," according to The Oregonian . Pierce's comments drew audible boos from the debate crowd, and the Republican candidate subsequently issued an apology in a video where he was surrounded by women.

Less than a week later, Americans learned how the GOP presidential nominee talks about women behind closed doors — what he has since dismissed as "locker-room banter." Like many of us, Brown was disturbed by Trump's lewd remarks in the now-infamous 2005 video where the GOP nominee brags to former Access Hollywood host Billy Bush that he can bed any woman he wants — regardless of her marital status or consent to being "wooed" by The Donald.

But for Brown — and many survivors of sexual assault and domestic violence, including these Bustle writers — Trump's comments added insult to long-smoldering injury. The lack of respect for women's autonomy and lived experience echoes the dismissal that's common practice among abusers — a tactic also known as gaslighting.

“It was re-traumatizing to me because [Pierce] clearly hadn’t listened to what I had to say, and it was just a very challenging next several days between that and Trump’s statement,” Brown told the Blade on Tuesday. “I don’t understand how anybody could consider voting for Donald Trump after what they heard him say.”

But despite Trump and Pierce's ham-handed responses to violence against women, the governor is well-aware that #NotAllMen take such an active role in perpetuating rape culture.

Nevertheless, Brown's story is all too familiar for countless people in the United States who have endured physical, sexual, or emotional abuse at the hands of a partner. According to the National Campaign Against Domestic Violence, 20 people are abused by an intimate partner every minute in the U.S. That amounts to more than 10 million women and men every year.

This election has been marked by a historic amount of negativity, reflected in the growing rates of dissatisfaction voters report feeling about either candidate. But Trump's unapologetic misogyny is having a particularly damaging effect on those who've faced violence prompted by this kind of devaluing of women's bodies and lives.

Publications ranging from The New York Times to Slate to Alternet have explored the phenomenon some call "Trump-induced anxiety," highlighting the very real effects such rhetoric has on the electorate's mental and physical health. That damage is heightened for the millions of Americans of all identities who have survived abuse in their own lives.