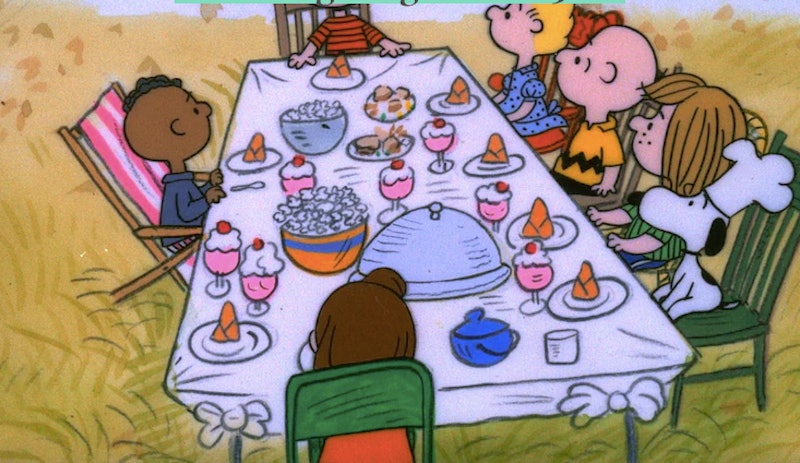 Of course, Thanksgiving is pretty great no matter what year it is. I mean, it’s a holiday that’s literally all about eating food, being thankful, and spending time with the people you love. That said, nostalgia can be a beautiful thing as well, and us '90s kids are growing up. (Sort of.) So if you, like myself, long for a time when kids had to watch holiday television specials on an actual TV at a specific time, Surge was still a thing, and children everywhere were either toting around Tamagotchis or shooting their siblings with Nerf Guns, then read on.

Here are nine things that will make you think of Thanksgiving in the ‘90s.

My parents had some pretty strict rules about TV when I was a kid, so I personally didn't have the pleasure of seeing Monica dance around with a Turkey on her head until the '90s were long-gone. Still, even when I watch this Friends Thanksgiving episode as a grown-up, I can't help but think about Thanksgiving in the '90s — and I'm guessing you probably can't, either.

2. Actually Planning Ahead To Watch Charlie Brown's Thanksgiving On TV, Or Watching It On VHS

Even though it originally aired on CBS in 1973, I always associate Charlie Brown's Thanksgiving with Thanksgiving in the '90s, and I feel like most of us '90s kids do. For years, my siblings and I would drop whatever we were doing at eight o'clock on Thanksgiving night (or the night before, depending on the year) to catch Charles M. Schulz' classic tale on ABC. I don't know if we loved it so much because the gang eats popcorn and toast for Thanksgiving dinner, or if it's that iconic pulling-the-football-away-scene between Charlie and Lucy, or if we just enjoyed watching Snoopy and Woodstock do what they do — but I think it's safe to say Charlie Brown's Thanksgiving is a sacred autumnal tale to most millennials. Personally, I still watch it every year.

Alright, so I know that Gilmore Girls technically didn't actually air until the year 2000, but what '90s kid didn't have a corduroy jacket like Lorelei's? I certainly did. I had colorful corduroy pants in the '90s, too. Heck, I even had corduroy overalls at one point. They were brown, and I wore them to Thanksgiving dinner at my grandma's house in 1997.

Since DVR wasn't invented until 1999 and YouTube wasn't around until 2005, watching the Macy's Thanksgiving Day Parade as a '90s kid took real dedication. I got up on time to watch almost every year, even though it was on early. Like countless other '90s kids, I figured watching giant incarnations of Sky Dancers and Sonic the Hedgehog floating through Times Square was worth losing sleep over. I was right.

The '90s saw all manner of new, somewhat strange, Thanksgiving food traditions. In 1994, cranberry sauce got a Southwestern-inspired upgrade to cranberry salsa, and it was delicious.

In 1995, tofurkey was created when a vegetarian named Seth Tibbot got together with Hans Wrobel to create the first vegan/vegetarian turkey substitute. Apparently, Wrobel was already selling his own stuffed tofu roasts in a sandwhich shop in Portland at the time, and Tibbet was tired of eating only side dishes at Thanksgiving dinner. The team reportedly made a tofu log with tempeh drumsticks before deciding to delve into Tofurkey-making. Since then, over three million Tofurkey roasts have been sold in five continents.

Finally, in 1996, Martha Stewart Living got Americans excited about deep-fried turkeys. This national fascination was furthered by the enthusiastic support of Alton Brown and other Food Network stars, but it's actually super unsafe. In fact, as Bustle reminded us last year, the National Fire Association estimates that 900 homes are destroyed by deep-fryers annually. Yikes.

7. Sitting At The Kids' Table And Drinking Surge

After the election cycle we've had, I wish there was a spot for me at the kids' table this year. I also miss Surge, because it was rad. I mean, Crystal Pepsi, Capri Sun, and Sunny D were pretty great, too — but I think we can all agree that Surge is pretty much the classic '90s kid beverage of choice. And if you had strict-ish parents like I did, Thanksgiving might have been one of those rare occasions when you were actually allowed to drink the stuff.

8. All The Special Thanksgiving Episodes On Nickelodeon

Whether you were an avid Rugrats fan or Rocko's Modern Life was your jam, Nickelodeon always delivered on their Thanksgiving specials. Also, the Hey, Arnold! Thanksgiving episode where Arnold spends the holiday with his closeted math teacher, Mr. Simmons, is particularly touching to re-watch as a grown up.

9. Getting Started On Your Holiday Wishlist

Bop It, Pogs, Tamagotchi, Gak, Furby, Nerf Guns, and the Easy Bake Oven are just a few toys that prove the '90s was hands-down the best decade for children's toys. Combine this with the fact that Thanksgiving is basically pre-Christmas here in the U.S., and it's really not surprising that part of celebrating Thanksgiving as a kid in the '90s was getting stoked for the holidays. At least, it was for me. Still is, actually.