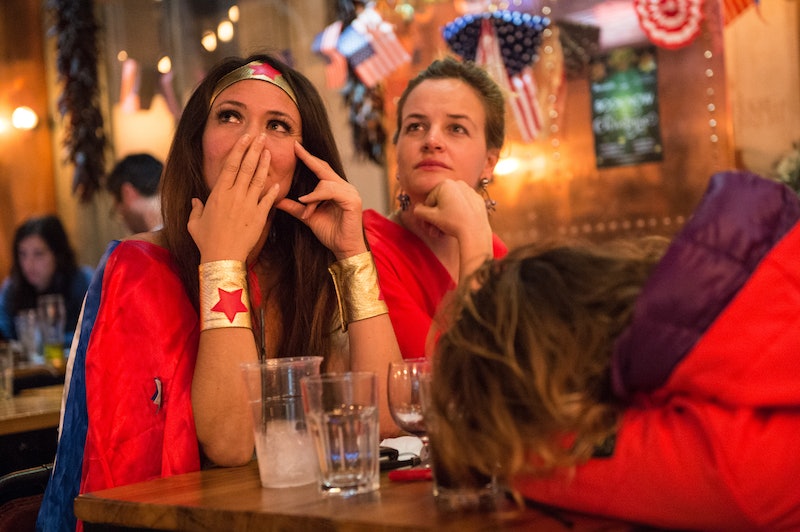 Beating projections and shocking onlookers worldwide, Donald Trump appears to have won the presidential election, securing the 270-plus electoral votes he needed to defeat Hillary Clinton Tuesday night, according to the Associated Press. Trump's win stunned much of the country, but it also troubled many groups of Americans, particularly women. Trump's sexist comments throughout the campaign worried many women all along, but now, it's time to focus on next steps: These simple-yet-meaningful feminist actions to combat Trump's sexism matter more now than ever before.

Over the past year and a half, it has been hard to ignore the numerous sexist comments that Trump has made throughout the duration of his campaign. He criticized Republican opponent Carly Fiorina's face. He retweeted disgusting messages about Clinton and Fox News anchor Megyn Kelly. Not to mention, a tape from 11 years ago revealed that Trump talked about kissing and grabbing women without their consent. Given these comments, it's hard to believe that Trump won Tuesday's election, but you can now expect to see him inaugurated in January.

Fortunately, you don't have to wait until January to take action. Clinton and, to a lesser extent, Bernie Sanders, built up strong feminist momentum throughout their campaigns. Despite Tuesday's results, that momentum shouldn't go to waste. Here are 37 feminist actions you can take right now.

At this point, there's really no telling what impact Trump's presidency will have on women in the United States. If his rhetoric is any indication, we're in for a bumpy four years. Let's not waste any time preparing.

More like this
5 Ways To Stand In Solidarity With Women In America From The UK
By Sophie McEvoy
How To Fight For Reproductive Rights, Based On How Much Time You Have
By Courtney Young
Here’s Your Fourth Of July Weekend Horoscope
By Mecca Woods
Your Guide To Earth Signs
By Nina Kahn
Get Even More From Bustle — Sign Up For The Newsletter