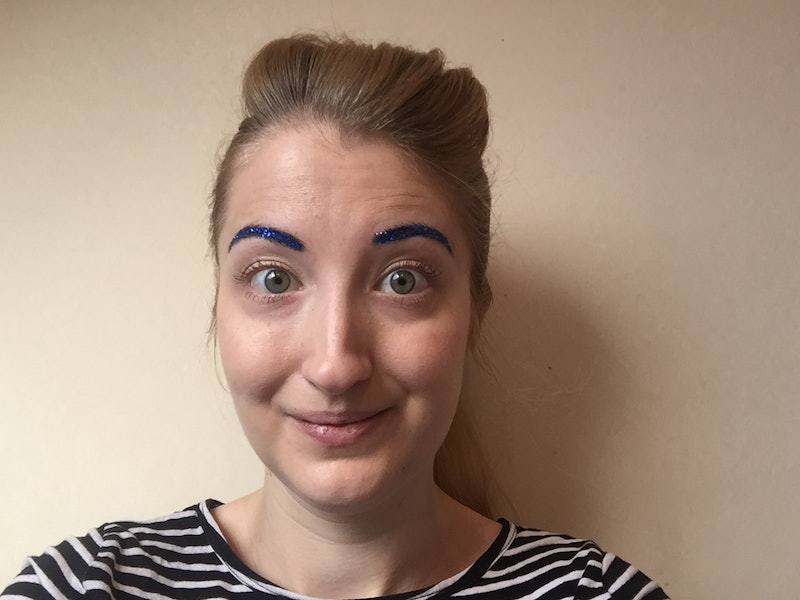 Aside from peanut butter and jelly, there's no better pairing than glitter and the holiday season, IMO. With this at the forefront of my festive-frenzied brain, I tried out glitter eyebrows in real life. I'm not one to need an excuse to play dress up or try out quirky beauty trends, but the holiday angels were definitely on my side with this one — considering it was well into December when I gave glitter eyebrows a go, I could blame my eccentric makeup on the time of the year. Score!

Beauty babes with their fingers on the pulse will know that glitter eyebrows are no new thing. On the run up to 2015's holiday season, the beauty world went absolutely mad for glitter. Folks were sprinkling glitter onto their roots, creating beautiful glitter pits, and even the gents were getting in on the whimsical trend with magical glitter beards. It was no surprise when people started sporting sparkle in their brows. However, this is one trend that has seemingly stuck around. Perhaps it's because glitter brows are relatively easy to achieve — you're not left trying to remove glitter out of larger areas of body hair — and it looks seriously glam and festive AF.

I thought it high time that I tried out glistening glitter eyebrows. But, I also wanted to see how wearable they were IRL, rather than at a holiday party or in the comfort of my bedroom.

If you've never checked out makeup artist Mykie's YouTube channel Glam&Gore before, I highly recommend you head on over ASAP. Mykie creates beautiful makeup looks and also slips in some insane, super gory SFX tutorials too. In the above tutorial, she shows viewers how to create glitter eyebrows in just one minute. As I'm no pro when it comes to makeup, I thought I'd give her tutorial a try in an attempt to create flawless glitter brows.

As this was an eyebrow look, I started off with a face of "natural" makeup and left my eyebrows bare. I wanted the main focus to be on my brows, so I chose not to wear a bright lipstick or anything that would detract from them.

First off, I went in with a blue, sparkly eyeshadow. After realizing it was far too dark, I used a much lighter eyeshadow to form the base of my eyebrows.

I used a couple of different brushes so I could get maximum coverage, while sticking to the shape of my brows.

Next, I applied a glitter glue to my eyebrows and dabbed the glitter on with the aforementioned brushes. I was going for a cyborg Frozen inspired look, which I'm sure is totally obvious. As you can see, the glitter was tricky to work with, so I had to do a spot of tidying up.

I was actually surprised at how easy this was to achieve and I was proud of my efforts, which I'm sure is apparent from the amount of selfies I took.

After the clean up, I was pleased with how neat everything was and I instantly felt more festive.

I thought this would be a killer look to wear to a holiday party, but I wasn't sure how it would hold up in everyday life. I was a little dubious to say the least.

As I put on my coat and got mentally prepared to leave the house with blue, sparkling eyebrows, I realized I looked like a disco Smurfette. I wasn't sure if this was a good or a bad thing. Among the first people I encountered, who actually interacted with me, was a taxi driver; he was driving and I was crossing the road. He smiled and nodded at me knowingly, but I reckoned this was because he thought I was a local, rather than because he thought my eyebrows looked fleek AF.

It's worth mentioning that I live in a small town in the North of England and it's a little like Star's Hollow, where everyone knows everyone. Sure enough, as soon as I stepped foot in a cafe, I spotted an old friend of my mom's who said, "Your eyebrows look Christmassy!" I took it as a compliment.

After ordering my drink, I bumped into my friend who recently modeled for my vegan clothing company, who commented that she thought my eyebrows looked surprisingly "subtle." Her sister came to join her and she told me, "Nice eyebrows!" I honestly felt like I was in the opening scene of Beauty and the Beast , where Belle is literally stumbling upon everybody she has ever met. It was pretty awesome!

After trying to take a "discreet" selfie in the street, I popped into a local store to buy some gifts. I did a double take as I had passed my aunt's friend. She told me she hadn't recognized me at first as she was initially drawn to my eyebrows. But, after I explained what I was up to, she said that she believes everyone should wear whatever they like wearing and I wholeheartedly agreed.

Finally, in a card shop, I bumped into my dad's friend who looked very surprised when he spotted my eyebrows. Before he could say anything, I interjected and asked what his initial thoughts were on my eyebrows, to which he replied, "very blue." I thought this was a very satisfactory answer.

I came back home to continue with some work and I totally forgot about my eyebrows. When my partner came home, I asked his opinion on my new look, to which he responded that he didn't care for it. When I prompted as to why he didn't like my brows, he said, "Way too weird! You look like you're going to be appearing on Star Trek." Part of me agreed with that comment.

My friend came round for a rehearsal for our vintage girl band and when I opened the door to her, she immediately said, "Love your brows!" It took me a split second to remember I was flaunting blue glitter on my eyebrows.

My Time With Glitter Brows

For the most part, I felt people were being polite when it came to this avant-garde eyebrow look. However, some folks had quite strong opinions too. They had a Marmite effect on people: They either loved them or hated them.

IMO, I didn't feel too weird going out and about in glitter brows, but I definitely won't be wearing them in everyday life again. Although I was surprised at how easy and cool the finished look was, I couldn't be bothered with the hassle of potentially getting glitter everywhere while trying to prep my eyebrows each morning. I also kept finding glitter all over the place — getting glitter grains in your eyes is no party, I can tell you.

I'd like to think I'd wear this for a fancy dress or Halloween party, because it's certainly a quirky look. But in reality, I feel like now I can say I've lost my glitter eyebrows virginity, I probably won't try them again. Sorry sparkle fans. But, if you want to add a spot of festive cheer to your holiday party, you should totally give glitter brows a try, if only to experience the surreal feeling of crusty, glitter-shedding body hair that makes you feel like one of Santa's elves.

More like this
What To Know About Brow Microshading Vs. Microblading
By Danielle Sinay
10 Ways To Modernize The Early '00s Frosted Eyeshadow Look
By Olivia Rose Ferreiro
21 AAPI-Owned Beauty Brands That Will Be Your New Favorites
By Audrey Noble
Ed Hardy-Inspired Cross Nail Designs Are Majorly Trending
By Danielle Sinay
Get Even More From Bustle — Sign Up For The Newsletter