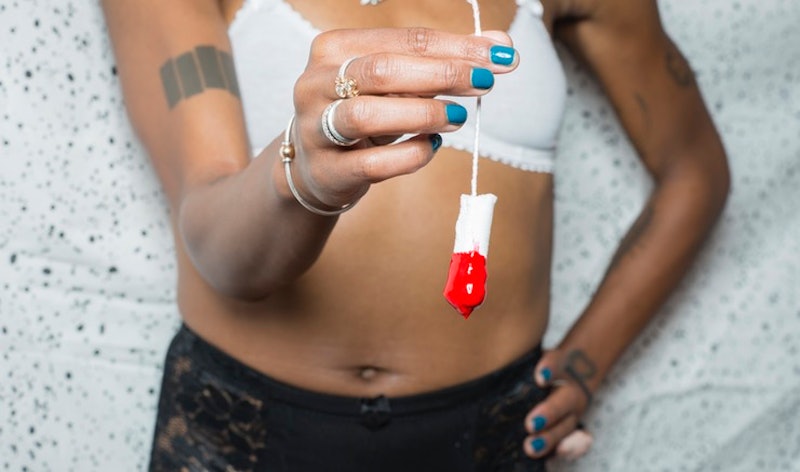 Hello, men. Culturally, you aren't expected to know a lot about periods; they happen once a month, if they don't it means a pregnancy test is needed, and you might have to pop out to the corner store and get some tampons once you're in a serious enough relationship. End of story, right? Not quite.

The thing about periods is that a bit of education can go a long way, whether it's making decisions about family planning, knowing what happens after periods stop, or combating misconceptions among other dudes. They may be "women's business," but there's nothing stopping you knowing about them and being completely cool with the fact that every adult woman in your life has had to deal with blood in her underwear one week out of four, plus cramps and whatever else her particular cycle throws at her. (If you ever thought women weren't badasses, spend at least five minutes contemplating how aggravating dealing with this sh*t 12 times a year is.)

There's a lot of silence and ignorance around periods, even among enlightened modern men; even if you came from a liberal household, your sisters may have been told to keep their tampon boxes out of your sight, and understanding precisely what happens and why might not have gone beyond the basics. Even if you're gay or have no interest in sexual interactions with women, this is still a helpful bunch of information to have, if only to sympathize and spread the truth to other men.

Don't just "let the women deal with it." Know your stuff. Here are eight things every grown-ass man should know about periods.

I've written before about the widespread nature of menstrual taboos in various societies, from the perception that women who are menstruating will spoil food to the idea that they need to be isolated from everybody else until their period ends. It's demented, and it's not true.

Period blood and tissue is not diseased and will not give you any illnesses if you encounter it (the odds are you won't contract HIV from period blood unless you have oral sex and have an open sore or lesion in your mouth). It's simply the shedding of the uterine lining every month. (And yes, that means most of us do encounter bits of tissue and period blood clots, not just a flood of blood, though that's not the same for everybody.) If you wouldn't be afraid of the disease-potential of a nosebleed, there's no reason to fear period blood.

Several Factors Besides Pregnancy Can Cause A Missed Period

Yes, a missed period does indeed often indicate a case of the babies, but there are other circumstances in which a woman can miss a menstrual period without her being pregnant. A research analyst at Clue, a menstrual app that was also behind the brilliant study of period euphemisms around the world earlier in 2016, told Bustle in June that there are a variety of situations in which women's periods can be expected to be late: illness, a recent international flight, serious stress, a massive gain or loss of weight, excessive exercise, and thyroid issues. Women who miss periods and don't know why should likely take a pregnancy test or go to the doctor, though, just in case.

It's Possible (But Not Likely) To Get Pregnant During A Period

"The probabilities of getting pregnant while on your period are low, but the possibilities are there," the American Pregnancy Association explains. The reality of the situation is that most people will not get pregnant from period sex, but that it depends on the ovulation cycle of the woman in question. If you don't remember grade school health class, the female menstrual cycle is a monthly series of events in which the woman's body produces eggs in preparation for possible pregnancy (ovulation), creates an excellent environment for fertilization, and clears out the uterus if no pregnancy is forthcoming.

The trick for period pregnancy is that it depends on when women ovulate (the prime time for getting pregnant); our cycles can be between 21 and 36 days long, and some women have even greater variation. If a woman ovulates very soon after her period, a sperm (which can live inside the body for up to five days) can possibly still fertilize an egg even if it was deposited during the last days of her period. Basically, stay protected.

Tampons Don't Get Us Off

This is a very odd one, but it appears I have to explain it, as ads about menstrual products on Facebook, for example, have been banned in the past because they're "sexual in nature," and tampons have been taxed as "luxuries." Plus, a lot of people still apparently believe that tampons somehow stop us being virgins (they do not, because the hymen isn't "ripped" like a solid sheet; it's always got holes in it, which is how the menstrual blood gets out in the first place).

Inserting tampons is neither fun nor particularly sexual for many women; if you're interested, there are two kinds available, ones with an applicator and ones without, and the tendency to choose one or the other is often cultural. Interestingly, a company has created a tampon that's designed to be worn during sex, but no, we aren't viewing our tampon provisions as a section of sex aids.

Our Menstrual Cycle Is Largely Out Of Our Control

Would that it were so simple. Periods turn up at inopportune times, and many women wish that they could will them away with sheer force of mental power, but most of us have just learned to cope with it.

There is, however, one exception. Women on the Pill often have an "off" week: three weeks of active Pill use and then a week of either no Pill at all or sugar or placebo pills every day. (Yes, they're still protected against getting pregnant during this "off" week.) This week is the time when Pill-having women get a withdrawal bleed, approximating a period; but if they really want, they can sometimes simply skip the "off" week and go onto the next round of pills immediately. Whether this is a good idea depends on the individual woman and the Pill she's on, though.

The reality of pre-menstrual syndrome is pretty difficult to ignore; but we're still trying to understand what actually causes it. You've also got to learn to read the data correctly. The Independent reported in 2015 that the common theory that PMS is due to ricocheting hormone levels isn't held up by the evidence, because studies have shown that the hormone levels in women reporting PMS are entirely normal; but, an expert noted, the issue may instead be located in how the brain or body metabolizes hormones in certain women.

Some scientists persist in believing that PMS symptoms are "all in the mind," but others have conducted interesting experiments that showed, for instance, that people with PMS show a reduction in symptoms if placed on a high-calcium, Vitamin-D supplemented diet. We also know that hormonal rises in prostaglandin levels are what induce cramps. The lack of scientific consensus means that research is difficult to fund, so we're likely not to fully understand what's happening for years to come. Suffice it to say, you'd be wise not to question PMS' existance next time your girlfriend is complaining about cramps.

Sex during a period is messy, but whether it's actually pleasurable depends heavily on the woman in question; there's nothing inherently "wrong" with the parts downstairs during it, and they don't necessarily need to be left alone for medical reasons. Positions that may lead to contact with the cervix may prove to be painful, so deep penetration is possibly not on the cards, but experimentation and communication are the right way forward. (This article about period sex also has some excellent pointers.)

As for no periods at all, the end of a woman's period-having life, menopause, does not actually mean that she stops functioning as a woman. While it can mean a drop in sexual desire and in sexual comfort (up to 48 percent report sex is a bit more painful because of vaginal dryness as the body's hormones change, according to the National Health Service), it definitely doesn't mean the end of sex full stop.

If anything, that's hardly the issue: a study in 2007 found that STDs are a serious issue among seniors in America and Britain, with syphilis and chlamydia particularly culprits. So yes, you still need to use protection with new partners even if your female partner can no longer get pregnant. Sorry.

More like this
How To Fight For Reproductive Rights, Based On How Much Time You Have
By Courtney Young
Are Gemini & Scorpio Compatible In A Relationship?
By Kristine Fellizar
One Powerful Quote In 'Doctor Strange 2' Is Going Viral On Twitter
By Alyssa Lapid
Under-The-Radar Summer Beauty Finds From Our Favorite Brands
By Isabella Biedenharn
Get Even More From Bustle — Sign Up For The Newsletter