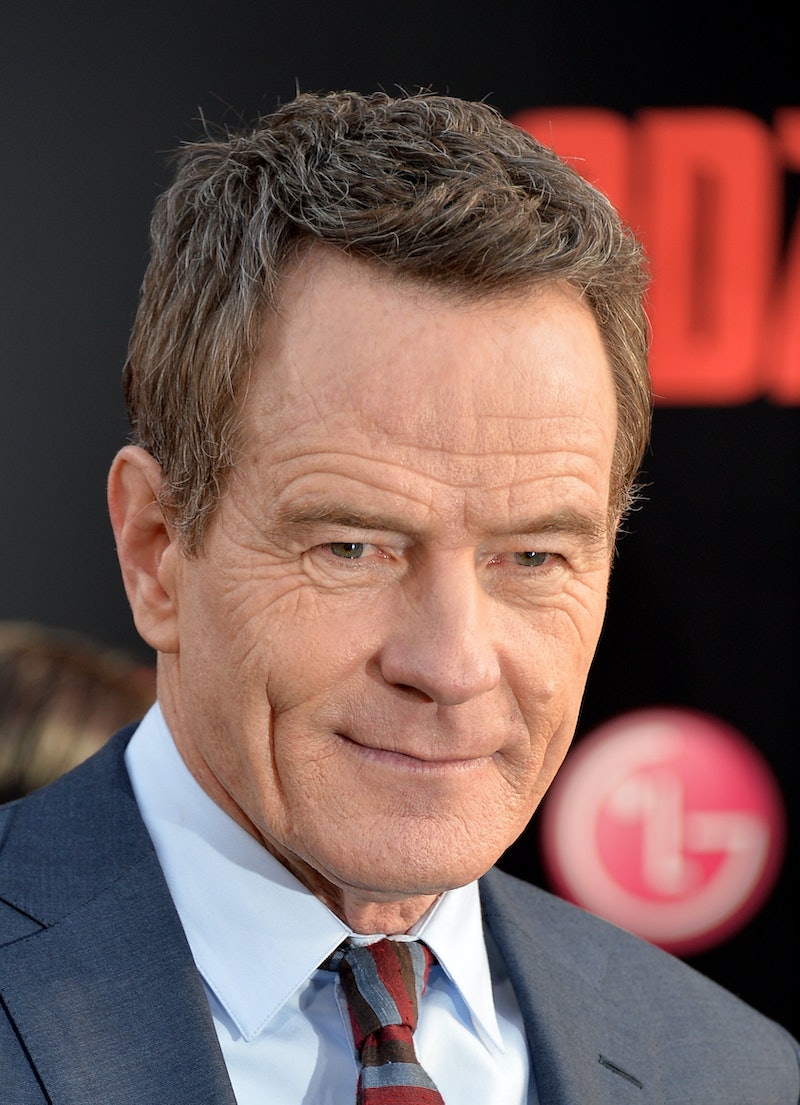 This weekend's box office battle features two of televisions legends facing off: Bryan Cranston and Jon Hamm. The Breaking Bad star appears in the hotly anticipated Godzilla reboot, the Mad Men actor is the lead of Disney's inspirational sports flick Million Dollar Arm , respectively. Now, whether you're a Cranston fan, a Hamm fan, or a fan of both men equally (present!) it's pretty safe to say that the special effects-heavy, bona fide summer movie fare Godzilla should trample the family-friendly baseball movie Million Dollar Arm. (Godzilla is not only expected to be No. 1 at the box office, but critics seem to be just as excited as moviegoers about it.)

Despite going head-to-head on the small and big screen, Cranston and Hamm don't have any kind of rivalry because...well, why the hell would they? They are both handsome and awesome and helped bring two of television's greatest characters to life. (Besides, only women in Hollywood are constantly pitted against each other, even the ones we all like. Case in point: the invented feud between 2014's Best Supporting Actress contenders Lupita Nyong'o and Jennifer Lawrence.) And while Cranston will more than likely top his AMC leading man comrade at the movies, has he always had the upper hand with Hamm? We investigate!

It's safe to say that Cranston's Godzilla will annihilate Hamm's Million Dollar Arm at the box office, we just don't know by how much. But over the past few years both man have seen mixed results, both with critics and ticket returns alike. Cranston's biggest hit thus far has been from appearing in the 2012 drama Argo, which not only won Best Picture, but earned $136 million at the U.S. box office. While 2011's Bridesmaids may not have won any Oscars (we demand a recount), the comedy featuring Hamm brought in $169 million at the domestic box office.

Poor Jon Hamm has turned into the Leonardo DiCaprio of the television world: he's vying so hard to get to the big prize and he keeps coming up empty handed. Hamm is a six-time Emmy nominee for his portrayal of the boozy Don Draper on Mad Men, but has gone 0-for-6. While he does have a Golden Globe to his name, he doesn't even come close to Cranston who has a Golden Globe and three Emmys for his brilliant performance as meth lord Walter White on Breaking Bad. The men will more than likely compete, once again, at the 2014 Emmys later this summer.

Mad Men may be a critical darling and an Internet-friendly meme-generator, but it had nowhere even close to the same culture impact as the the pop culture frenzy that was Breaking Bad. Case in point: the premiere episode of the final season of Breaking Bad brought in 5.9 million viewers, while Mad Men only had 2.3 million fans tune in for theirs.

Both of these talented men are acclaimed dramatic actors with comedic chops to boot (Hamm's turn as the hook-handed doctor Drew on 30 Rock and Cranston's star-making performance as kooky patriarch Hal on Malcolm in the Middle), they both are in long, committed relationships (Cranston with his wife of 25 years Robin Dearden, and Hamm with his partner of 17 years, Jennifer Westfeldt), they both can bust a move (see: Hamm shaking it at the Emmys for Betty White and Cranston getting down with Stephen Colbert) and they're both well, just so damn likable and handsome.

Winner: No contest here...it's a tie. And we're all winners because of it.