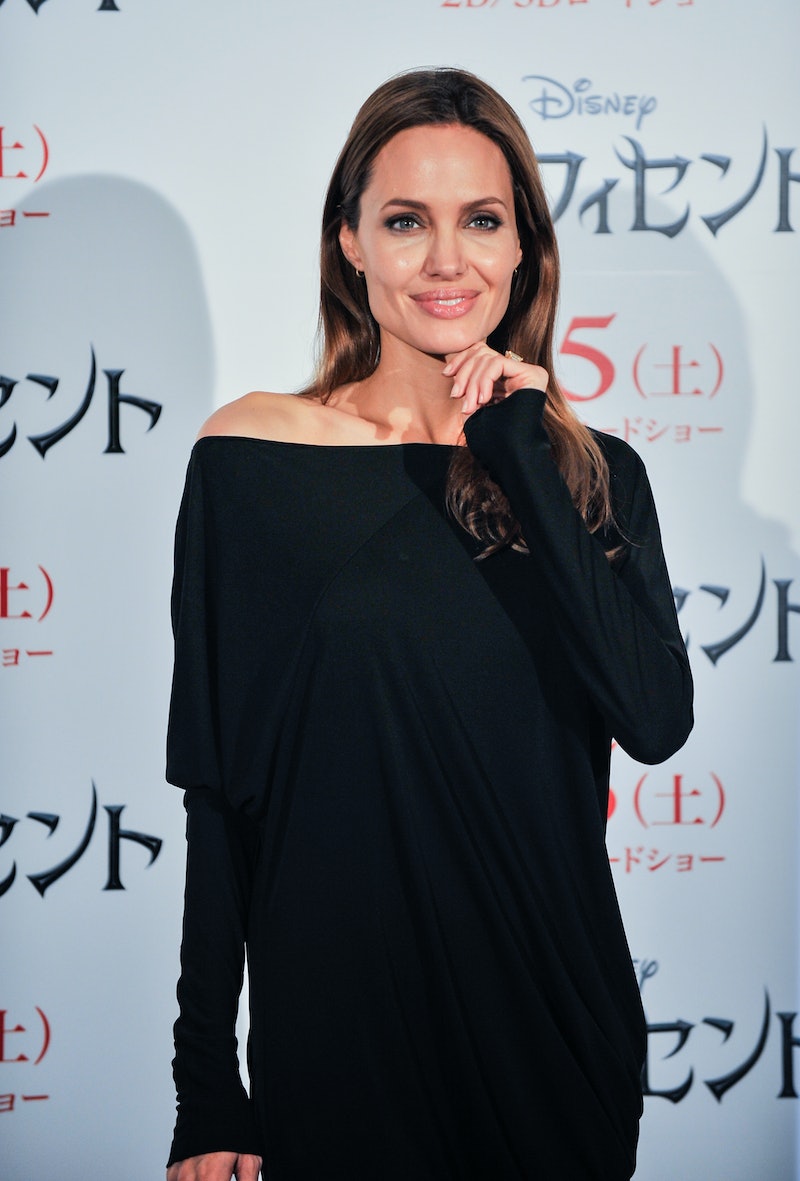 Ah, Angelina Jolie. There is little (if anything) this amazing woman can do wrong. First, there are her six (count ’em, six) beautiful children — one of who recently landed her first film role alongside mom — and her swoon-worthy relationship with soon-to-be husband Brad Pitt. Then there’s the unbelievable international humanitarian efforts and activism she’s participated in for decades around the globe. And let’s not forget about her unparalleled talents on screen and behind the camera. Case in point: Her latest movie, Disney’s Maleficent, has already become her highest-grossing film ever, though it’s only been out for a few short weeks.

But this all goes without mentioning the power Jolie has on the style and fashion fronts. She’s a star who, more than anyone else perhaps, is known for mastering the all-black ensemble (though she certainly looks good in color from time to time, too) and stunning everyone with her dark, dramatic gowns, even when they don’t have buzz-worthy, leggy moments to boot (hello, Oscars!).

Unfortunately, even Ms. LBD couldn’t quite pull off her latest look on the Maleficent press tour. Arriving for a photocall in Tokyo, the star took her place beside co-star and actress-turned-Disney-princess Elle Fanning wearing a baggy, off-the-shoulder black ensemble that did the actress no favors in the figure-flattering department.

Sure, the relaxed fit is a little more appropriate for a daytime press event than a full-blown premiere and yes, breezier dresses are totally in right now. But other than the slightly fitted midi skirt, this dress looks like a bag on the beautiful actress, and it's especially boring when paired with basic platform pumps, lackluster locks, and a total lack of jewelry or other accessories.

I mean, I'm sure you could argue that Jolie looks far better than most other leading ladies would in that shapeless ensemble, but I think everyone could agree that it's much less impressive than nearly every one of the all-black outfits the actress has donned on her weeks-long press tour. (Even this basic Michael Kors number from a press event in Shanghai was a lot more intriguing, thanks to its sheer sleeves and the custom-made Louboutins she paired it with.)

Regardless of this minor slip up, I have no doubt that Jolie will be back on her game the next time we see her on the red carpet. And hey, maybe she'll even wear a hint of color that time around.

More like this
What Is Brad Pitt’s Net Worth? The Bullet Train Star Now Makes 8 Figures Per Film
By Hugh McIntyre
Most Comfortable Underwear For Big Butts
By Audrey Williams
Brad Pitt’s Recent Dating History Includes A German Model
By Brad Witter
11 Graduation Guest Outfit Ideas To Wear To Someone Else’s Ceremony
By Phoebe Avison and Claire Fox
Get Even More From Bustle — Sign Up For The Newsletter