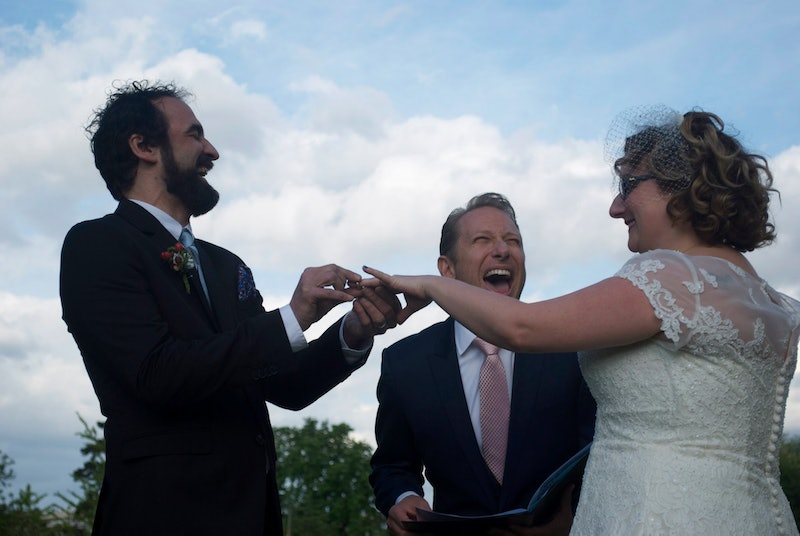 When I fell in love with my husband, Olivier, I didn’t think of the logistics. Honestly, who really wants to examine the fact that their relationship is going to be a bit more challenging than most when they're busy falling in love? I didn't.

My husband is French. He’s a born and raised Parisian whom I, a New Yorker, met in Paris. The night I met him and took him home, I assumed he’d be a one-night stand that I’d never see again. Now, almost two years later, we’re married. It’s awesome.

But three days after Olivier and I said "I do" during our legal marriage ceremony in New York City last December, he went back to Paris.

Because the whole immigration thing is no easy process, even when you're married, Olivier and I spend more time apart than most newlyweds. I go there for 90 days, he comes here for 90 days, then because we can't be in each other's country for more than 90 days in a 180 day period, we get to be long distance.

My husband is fortunate enough that he's not fleeing his country because of war, poverty, or lack of basic human rights. France is a great country. It's beautiful, serene, and who can beat the wine and cheese? But my husband knew from the beginning he'd always be in competition with New York when it came to being No. 2 in my heart, and that is something he's accepted.

Once our immigration papers get cleared up, we'd like to be able to settle in one country for a year or two, at least. We'd like the U.S. to be that country, not because I'm some staunch patriot, but because I love New York. Then, if the mood strikes, we can move to France.

Olivier has zero desire to live in the United States forever. He’s not looking for citizenship or even a permanent green card. But what he is looking for is clearance to stay in the States longer than 90 days and to be able to work here legally. This means he would need a temporary green card that will allow for “conditional permanent residence” for two years.

We’ve heard a lot about immigration and immigration reform lately. With the recent surge in immigrants coming into the U.S. from Central America, most of them children whose parents want them to escape the poverty and danger in their own country, it’s understandable that immigration is a concern. Do we have enough room for all these kids? And with roughly 6,000 of them making it across the border each month, if they’re allowed to stay, who will take care of them? It is indeed a crisis, and a humanitarian one at that.

I believe that America is for everyone. Although some are fine with sending immigrating minors back to their home countries with little regard for the gangs that have made places like Honduras, El Salvador, and Guatemala pretty much war zones, I will never be one of them. My ancestors were immigrants, and so are the ancestors of every single American who doesn’t have Native American blood pumping through their veins.

But while I’ve always felt that America should be proud of the salad bowl that it is and keep it that way, I’m a little embarrassed to say that I never felt the issue was really my concern until it impacted me on a personal level. As someone from an upper middle class family in New England, I always thought immigration was an issue that I’d never have to deal with personally.

It took having to research these immigration policies on my own to make me realize just how much the U.S. definitely needs immigration reform. It shouldn’t be this difficult for people to want to come here and make a life for themselves.

Immigration needs to be reformed on two levels: on the federal level and on the human level. While we wait to see if President Barack Obama uses this executive power to enact his immigration reform that a very Republican Congress failed to, we also need to focus on the human level.

The stigma attached to immigrants as being good-for-nothing freeloaders looking for a handout needs to cease. Because my husband is white and European, and wants to move here to be with his educated, white wife, no one looks at him and thinks he’s asking for a handout. If he was from Mexico, I'm sure that wouldn't be the case.

As I’ve gotten older and become more aware, I’ve realized that I'm not that impressed with America. Racism runs rampant here. Kids like Trayvon Mar tin and Mike Brown are murdered. Reproductive rights are constantly threatened by legislation and religion, rapists get a slap on the wrist, especially if it means messing up football season, and the speaker of the House is so busy trying to sue the president of the country that he's not getting anything else done.

Every time I turn on the news I question why I don’t just pick up and move to Europe permanently, but then I remember: I live in New York City, which, as previously mentioned, I love. And that is why I stay.

In the long term, it would be easier for me to gain legal residency in France. As someone who's married to a French citizen, to live there, I just need to enter the country on a spousal visa, then apply for my carte de séjour, which is the card that will allow me to stay for up to two years (it has to be renewed after that). Before my application can be accepted, I must head to the Office des Migrations Internationales to be examined by doctors, you know, don't want to bring any weird infections into the country. Then I just sit and wait.

It can take several months for everything to be processed, but it doesn't involve all the hoopla that it does for immigrants coming to the States. I'm not saying France's immigration policy is perfect — far from it: The country has always been fairly lenient in their immigration policies, and recently, some citizens have reacted against that policy with a severe backlash against immigrants. France fears what they’re calling the “Islamization of France,” and anti-immigrant hate crimes are on the rise.

However, perhaps because of my whiteness, when it comes to Olivier and me trying to get my French residency, the process is far less humiliating than it is in the United States, even though here we undoubtedly also have it easier, thanks to the color of our skin.

Still, in France, at no point will Olivier and I be asked hundreds of questions about our relationship. Our love will never be questioned, and no one is going to come by our apartment to make sure we really do live together. I don't even have to know the president's name.

This fall, Olivier and I will begin the arduous process of getting him legally settled in the United States. We'll start at the French Consulate where he'll have to prove he's both a French citizen and a French national. We'll have to provide them with the extended version of our marriage license that includes our personal details and the signatures of our witnesses, and it won't be cheap.

Paperwork will be filled out, signed, and filed, and there will be more fees to pay. We'll promise to tell the whole truth and nothing but the truth, then we'll head over to INS.

There, we'll have to prove to strangers that we are very much in love, this isn't a green card marriage, and yes, that I know the birthday of his second cousin whom even Olivier has never met, or something equally ridiculous. If it's this hard for someone who's married to an American, I can't even imagine how much harder it would be for someone who comes to the States without ties, but just wants a better life than the one they've known.

My husband is fortunate enough that he's not fleeing his country because of war, poverty, or lack of basic human rights. France is a great country. It's beautiful, serene, and who can beat the wine and cheese? But my husband knew from the beginning he'd always be in competition with New York when it came to being No. 2 in my heart, and that is something he's accepted. (The No. 1 spot belongs to my dog, Hubbell, of course.)

The truth is, I haven't been impressed with the United States for a very long time, and seeing up close and personal what immigrants have to go through to live here just adds to my already disenchanted view of this place.

I understand that an open door policy at our borders would just lead to chaos. I know that laws and regulations exist for a reason. But what I also know is that United States' policies on immigration need an overhaul. Immigrants shouldn't be greeted at the border with gritted teeth, suspicion, and disdain. One of the best things this county has going for it is its beautiful diversity.

I may not be the most patriotic person out there, but for the time being, I want to live in the United States with my husband. I want to be in the same place for more than 90 days together without getting emotional around the 80-day mark, because we know our days our numbered. But because American immigration policies are like something out of a bad Wes Craven movie, I know there will be a lot more running in circles until we can finally stay in the same place.

The fact that we're still better off than most navigating this system? It breaks my heart.