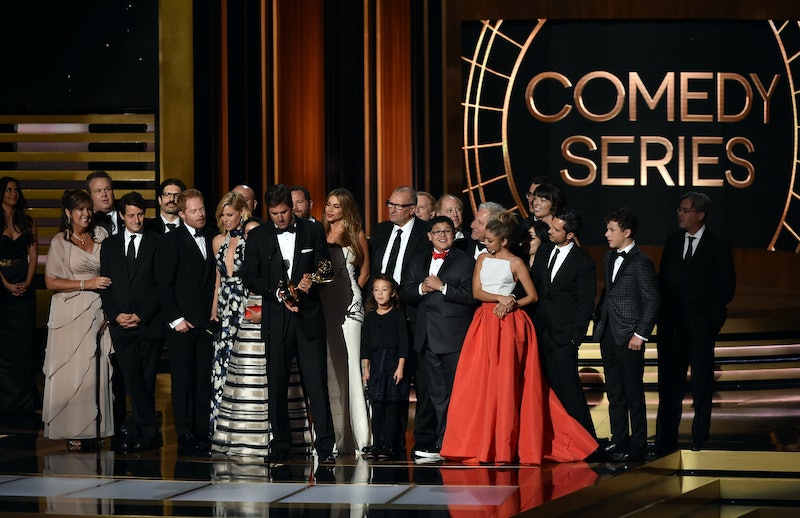 The 2014 Emmy Awards are over. The show was glamorous because of the fashion, semi-funny because of Seth Meyers, and long, because you know, it's the Emmys. But all good things must come to an end and now we must wait another year until we can join in on the revelry again. But because I don't want the awards to be over, and because there were a lot of OMG moments of the night, I figured there are a few more awards that should be handed out before we call the Emmys complete. We present to you the Emmy Awards Awards.

The Queen Bey Award goes to: Amy Poehler, duh. Bey might have killed the VMAs, but Poehler's intro as Beyonce made me love her more than Leslie Knope loves waffles.

The Adele Dazeem Scholarship for Pronunciation goes to: Gwen Stefani. There are two things I can confidently say Stefani is NOT. 1) A "Hollaback Girl" and 2) A fan of The Colbert Report. Seriously, she pronounced it The "Colbore" Report. Luckily, she had "always the gentleman" Adam Levine by her side to correct her.

The Olivia Pope Shut It Down Award goes to: Weird Al's performance of theme songs, if you can call them that. Shut. It. Down.

The "Come Again?" Award goes to: Kathy Bates. If you look up "shocked" in the dictionary, you'll see a picture of Bates' face after her name was announced.

The Pinkman "Gatorade Me, Bitch" Award goes to: Seth's monologue. It kills me to say that because I am so pro-Seth, but it was a little dry.

The MIA Award goes to: Benedict Cumberbatch. Come out, come out where ever you are (in that wet tee from your ALS Ice Bucket Challenge, or whatever).

The Regulation Hottie Award goes to: Lizzy Caplan, because even though she didn't win, she looked stunning in her black and white cutout dress. She has come a long way since the Mean Girls purple tux days.

The Matthew McConaughey "Alright, Alright, Alright" Achievement Award goes to: Jim Parsons. Jim won tonight for his role as Sheldon in The Big Bang Theory for the third time.

The Alec Baldwin "Get That Camera Out Of My Face" Award goes to: All of the random street people that Billy Eichner and Seth Meyers ambushed on during "Billy on the Street." I know this happened so quickly that a lot of the participating pedestrians were caught off guard, but do they really not know Seth Meyers when he is standing right in front of them?

The Man Bun Award goes to: Kit Harrington. Do you think he wears the man bun when he goes skinny-dipping? Just wondering...

The Making Out With Walter White Before The Whole Drug Thing Award goes to: Uh, Bryan Cranston, who else?

The Is That A Banana In Your Pocket, Or Are You Just Happy To See Us Award goes to: Sorry E!, the "Clutch Cam" was a cute, albeit fail, of an idea. Maybe next year invest in a "Crotch Cam"? I'm sure it would be a very successful Kickstarter.

The Thank God For Netflix Award goes to: Breaking Bad. Not only did the show itself win, but Bryan Cranston, Aaron Paul (swoon), and Anna Gunn won for their roles on the show, so take a moment and watch, or rewatch, every episode of every season.

The Let's All Be Friends Award goes to: Julia Roberts. She has to get something out of this year's award shows right? When Kathy Bates won for her role on American Horror Story: Coven, Julia's mega watt smile was, well, less than authentic.

And that brings the Emmy Awards Awards to a close, and we didn't even get cut off by the dramatic swell of orchestra music.

More like this
Why Sadie Sink Is Hopeful Max Will Return In Stranger Things Season 5
By Brad Witter
'Schitt's Creek' Star Sarah Levy Named Her Baby Boy After Her Famous Father
By Jake Viswanath
'Stranger Things' Star David Harbour Has This Actor In Mind For A Hopper Spinoff
By Alyssa Lapid
What Working At Marvel Is Really Like, According To A 'Ms. Marvel' Co-Creator
By Gretchen Smail
Get Even More From Bustle — Sign Up For The Newsletter