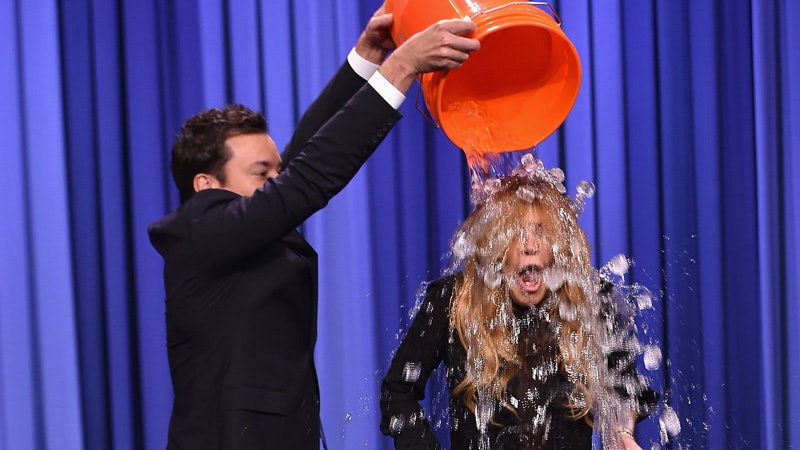 At this point, you've surely heard about the Ice Bucket Challenge — extra points if you've participated or seen someone do it on the street. This summer's viral phenomenon is simple: If challenged, you either donate to the ALS Association, or you dump a bucket of ice water over your head. In either scenario, you challenge a friend (or a couple of friends) to do the same. Amidst all the excitement and squealing, it's easy to forget the cause behind the Ice Bucket Challenge. Whether you enter the challenge knowing about ALS or not, its chain effect has raised $41.8 million towards ALS research as of Aug. 21, according to the New York Times. That's pretty impressive.

The ALS Ice Bucket Challenge hasn't come without raised eyebrows. Despite a drought in California, celebrities have taken to the Ice Bucket Challenge like fish to water — quite literally. Our favorite stars have embraced the challenge (and, undoubtedly, the social media exposure), passing it along to their other famous friends. Some celebrities have stood up for water conservation, though. Most notably, Kristen Stewart upped Anne Hathaway's challenge by using "dirty bath water," and asked others to be mindful of California water conservation.

Drought or no drought, you'll inevitably stumble upon a challenge or two when you scroll through Facebook, Twitter, and Instagram at the end of the day. Everyone from your high school friends to the Disney princesses have dumped buckets on their head. Hey, even the editor-in-chief of Vogue Anna Wintour sacrificed her perfectly symmetrical bob for it. As such, you'll also find some head-scratching challenges. Sure, most celebrities will nominate their co-stars when promoting a new film, or their significant others, or their brunch buddies. But, some of them dared to dream, and have challenged more aspirational contenders.

I've rounded up some of the more surprising (and random) celebrity ALS Ice Bucket Challenge nominations. However, one celebrity has been notably absent. So, I ask: WHY HAS NO ONE NOMINATED RYAN GOSLING?

Despite having consciously uncoupled, Gwyneth Paltrow took the high road and nominated Chris Martin to do the Ice Bucket Challenge. Is this her way of proving she's cool with Martin's new flame?

I mean, of course Shia LaBeouf would nominate performance artist Marina Abramovic. Abramovic's Ice Bucket Challenge will probably be featured at the MoMA in 2015.

I hope Sarah Jessica Parker's nomination of comedian Billy Eichner is a hint at a cameo in the next season of Billy on the Street .

Aside from the obvious, the connection between Lindsay Lohan and the Prince of Wales is not apparent.

So all that Preserve drama is water under the bridge — or, should I say, ice in the bucket?

Firstly, it's surprising that Christiano Ronaldo was one of the first celebrities to call out Beyoncé (who has yet to respond to the Ice Bucket Challenge). What's even more charming: the way he (properly) pronounces Beyoncé, with emphasis on the accent.

Do they hang out? What's the story behind this? I want answers.

Hey, Channing Tatum is a real actor. He nominates only real actors. Here's hoping that Meryl Streep will not only accept the challenge, but also nominate her BFF.

While we're waiting on Dame Maggie Smith to accept Emma Stone's challenge, we know that will be the viral video that ends all viral videos.

He really wants that US citizenship...

More like this
Will Beyoncé Be At The BET Awards To Perform “Break My Soul” Or Attend The Show?
By Jake Viswanath
The Best Memes & Tweets About Beyonce's New 'Renaissance' Album
By Radhika Menon
Lilibet & Prince Charles’ First Meeting Was Emotional, According To Reports
By El Hunt
Justin & Hailey Bieber's Bond Is "Unbreakable" Amid His Ramsay Hunt Diagnosis
By Bustle Editors
Get Even More From Bustle — Sign Up For The Newsletter