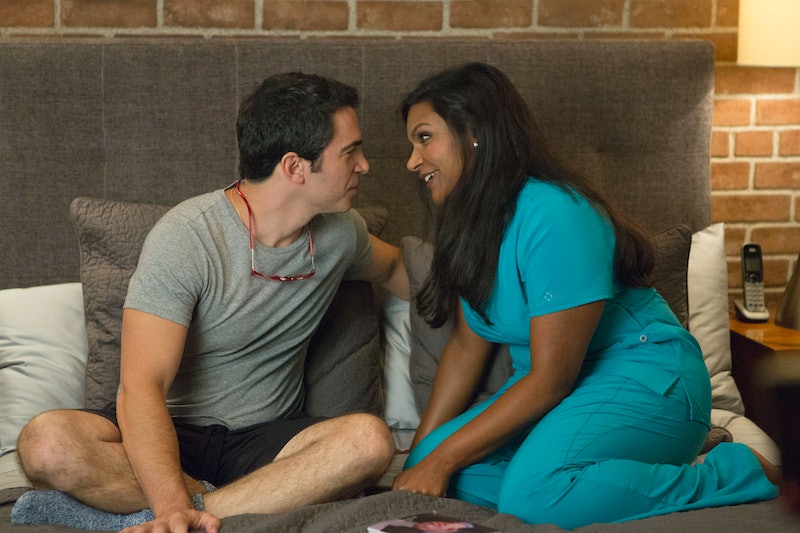 Mindy is back (and with Danny!) and I cannot contain my joy. Season 3 of The Mindy Project airs on Fox on Tuesday, September 16, and though The Mindy Project Season 2 saw Mindy go through a lot of romantic ups and downs, she ended the season with Danny Castellano. As show creator and star Mindy Kaling herself said on The Colbert Report on Monday night, The Mindy Project can be a revolving door of men (i.e. guest stars) for her to date. But it looks like Season 3 may have Danny and Mindy actually stay together for more than a few episodes. (Please let this be true, Mindy Kaling!)

We know Danny's mom and Mindy won't be getting along in Season 3, but I think Mindy is tough enough to handle some familial drama. So here's hoping Mindy and Danny can last since they already broke up last season, and I don't need to be reliving that again quite so soon. But how did Mindy and Danny finally get together atop The Empire State Building in Season 2? It was a long road to the romantic comedy-bliss season finale since although Dr. Mindy Lahiri is an independent woman with her own mind, she is rarely sans a love interest.

The best way to recap Season 2 is to go through the men in her life. (Side bar: she really likes white dudes — as her coworkers mocked her for in the episode "Mindy Lahiri Is a Racist.") And since The Mindy Project is a parade of attractive men from other TV shows, there are many, many Mindy boyfriends to discuss.

Mindy Gives the Ring Back to Pastor Casey

Season 2 started with Mindy coming back from Haiti with her short hair and her fiancé Casey ( Workaholics ' Anders Holm). With the deep looks that Danny had been giving Mindy (and the fact that it's a TV show about dating), there was no way that these two were going to get married. Pastor Casey was awesome (although he was no Danny), but he went through an identity crisis. After leaving the church to become a DJ in the music festival scene, and then deciding he should become an event planner (all in one episode!), Mindy broke off the engagement.

The broke up like they got engaged — too quickly. So it was time for Mindy to move on.

Then Mindy Thought About Rebounding with... Morgan?

In a homage to Good Luck Chuck (can you really give homage to such a terrible movie?), Morgan claimed that women find the men they will marry after they hook up with him. In her desperation, Mindy decided she should try it with "Magic Morgan." But when he ended up naked in her bed, she realized she couldn't do it. Morgan then tried to sue Mindy for sexual harassment with help from the new lawyer in their office building — Cliff (It's Always Sunny in Philadelphia's Glenn Howerton). It was obvious that Mindy would never really get with Morgan and it was equally obvious that Cliff would definitely be a love interest later down the road.

Mindy was forced to go on a date with Morgan to end the lawsuit, but don't feel too bad for good ole Morgan. He got together with fellow nurse Tamra (Xosha Roquemore) later in Season 2 and Roquemore said we'll be seeing more of the Morgan-Tamra romance.

Mindy Got Cultured with Jason

Although clearly not emotionally stable, Mindy didn't hesitate to move on after the Morgan fiasco — this time with a newspaper columnist she met on an airplane, Jason (Mad Men's Ben Feldman). Since Ben is an arts and culture writer, she realized she needed to act like she was not only obsessed with pop culture and celebrities. So, she took him to an art exhibit... featuring nude photography of none other than Danny Castellano. Jason was clearly just a plot point to have us see Danny have a breakdown over his nude photos from his ex-wife, but that was A-OK by me. For Mindy and Danny to successfully be together, we needed to see him move on from Christina as much as we needed to see Mindy move on from Casey.

She Befriended the New Doc

After a failed attempt at having James Franco join the practice of Shulman & Associates, they hired the new bro doctor Peter (Happy Endings' Adam Pally). Despite being an OB/GYN practice, Shulman & Associates was too much testosterone in the office and not enough attention to Mindy for Mindy's standards. It took her some time, but she finally wore down Peter into becoming her friend (particularly in the episode "Bros Club For Dudes").

Since Mindy dropped all of her friends who were girls in Season 2 (peace out, Anna Camp!), Peter became her new wingman, including being her date at her reformed drug addict-ex-boyfriend Josh's wedding. The pair seems to sincerely be only friends, which is refreshing since Mindy has hooked up with almost everybody in her office building.

She Learned To Skateboard with Graham

Another short-lived romantic partner, Graham (Justified's Timothy Olyphant) was the skater man that Mindy dated to show how free she could be. He was another ploy to bring Danny and Mindy closer, as the doctors went on a double date with their new loves. Obviously, Danny and Mindy had more chemistry together than with their dates.

She Sexted with Cliff

Mindy had some awkward moments with Cliff, from an elaborate Christmas party trap to confused sexting (which was really Morgan and Peter texting Cliff, pretending to be Mindy). But the pair got together after a few episodes during a romantic, snowy kiss. Of course, by that point, Danny was actively pining for Mindy (and showing off his sweet, sweet dance moves), so although I liked Cliff, I wasn't sure how long he'd last.

Turns out, not long at all. When Mindy went to LA for a conference, she ran into Casey. When Cliff saw a photo of said meeting — Mindy and Casey in a pool at a Hollywood party (after she told Cliff she wouldn't see him) — Cliff broke it off. A distraught Mindy sought the guidance of Danny to draft an email to get Cliff back, but that led to ...

That Time She Made Out with Danny

On the flight back to New York, Danny was overwhelmed by his feelings and in turn, made out with Mindy. Emotion were high as Danny also made amends with his father out West with Mindy's help. Mindy was clearly pumped to be with Danny, but her email to Cliff worked out as she hoped, and he wanted her back right as she realized her Danny-feelings were real.

As much as I wanted Danny and Mindy to get together, I suffered some whiplash at this course of events. Mindy had been digging on Cliff for almost all of Season 2, but the minute Danny made out with her, she didn't want him? I mean, I guess I'd forget all other men if Chris Messina looked at me with his pony eyelashes too.

After that, Cliff's grandmother died (of course) and he took it oddly hard (of course — although it led to hilarious lines about a grown man not being able to cope with his grandmother's death), so Mindy didn't tell Cliff about Danny right away. It all culminated in Cliff finding out and punching Danny at the funeral. As we can see from the Season 3 pic below, Cliff will be back in Season 3 for the September 30 episode, "Crimes & Misdemeanors & Ex-BFs" (and he's looking slightly cozy with Mindy), so I can't wait to see how he handles seeing Mindy and Danny together. For real this time.

And Then She Broke Up with Danny

After an adorable reading of Bridget Jones's Diary in a hospital bed (with Danny's infamous reading glasses on display), the show decided to tear my heart out with Danny ending it with Mindy. The breakup had to do a lot with the over involvement of their coworkers in their business (Morgan even moved in with Mindy for a bit) and Danny not wanting to make their relationship public. He gave a lame — but heartfelt (dammit, Messina!) — speech about how he couldn't lose his friend. Well, Danny. Maybe you should have thought about that BEFORE YOU MADE HER HORNY FOR YOUR KISSES.

What was even more infuriating about their speedy breakup, was that Danny seemed to rebound almost instantly with Peter's sister. But on the plus side, for the first time ever, Mindy actually didn't jump right into it with another guy (just proving how much Danny means to her). This time, she toyed with the idea of leaving the practice to go work for Sheila Hamilton (Anna Gunn) in her swanky, celebrity-studded office. No dice though, since Hamilton didn't accept insurance. And as self-centered and celebrity-obsessed as Mindy can be, she showed us all another reason why she is so worth loving: she wants to make sure her patients are taken care of, even when they can't afford it.

She One-Night Standed with Schmidt

Peter convinced Mindy to buck up after the Danny breakup and helped her pick up first-grade teacher Lee (New Girl's Max Greenfield). Even after Peter and Mindy so inappropriately confronted him at his school for leaving Mindy without saying goodbye, it was purely a fling (uh, he was married after all).

She Law & Ordered with Charlie

In another episode that focused on Mindy's role as a doctor (since those are severely lacking), we saw Mindy take patient Jenny under her Wing(s) (oh yeah, I went there), when Jenny's father wouldn't let her take birth control pills. Of course, Mindy took it outrageously too far with Jenny temporarily moving into her apartment. Her police officer dad, Charlie (Wings' Tim Daly), had to intervene and the tough-talking sparks flew. We hadn't seen Mindy date an older man, but Danny was too determined to get Mindy back to let that lie.

And Then She Reunited with Danny (Always and Forever, please?)

After trying to convince Mindy to buy the apartment that he owns in his building (who knew?) and writing a "Missed Connection" directed to Mindy under the name of Andy, Danny lured Mindy back to him. There were a couple close calls and some hijinks ensued (with Mindy being left on the top of the Empire State Building alone), but the pair reunited there à la Sleepless in Seattle, à la An Affair to Remember.

The finale ended with the two adorably bickering on the top of the iconic building. Now, The Mindy Project has the challenge of not falling into a slump with the two leads in a romantic relationship, but that shouldn't be a problem since Mindy is anything but boring.