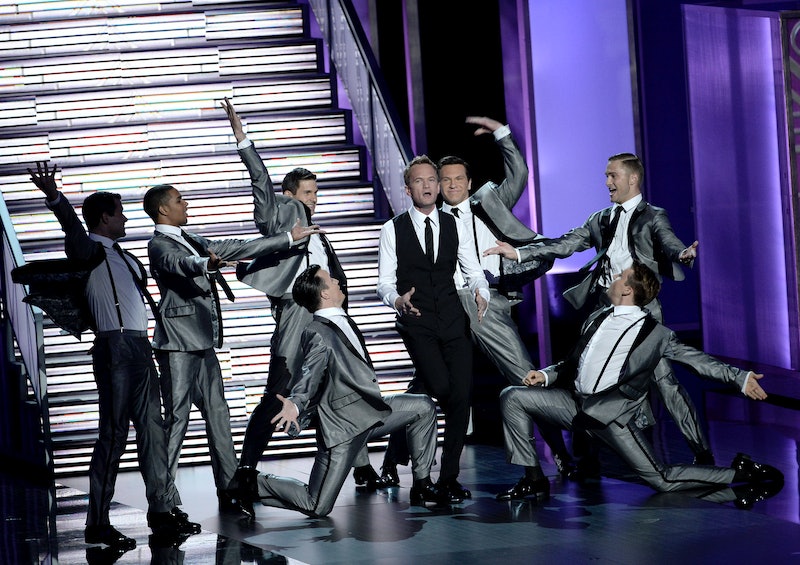 Breaking Bad actor and Emmy 2013 loser Aaron Paul, as drug dealer Jesse, said it best during Season 5's "Rabid Dog" episode of the hit AMC series: "Whatever you think is supposed to happen, the exact reverse opposite of that is gonna happen." The quote might have been describing Walter White's demise on the series (that we all missed Sunday thanks to a certain awards show), but it very well might have described Sunday's Emmys ceremony. Because nothing (well, almost nothing) went as planned during the awards show.

Typically, this is a good thing when it comes to awards ceremonies that last longer than a Law & Order marathon. Unfortunately, though, this year's surprises only served to disappoint us. Think Neil Patrick Harris would bring his A-game? You'd fail to be correct. Think the Emmys would make up for making us miss Breaking Bad by awarding Season 5 Part 1 all of the Emmys? Nope, bitch. Think the Emmys would be a joyful affair? Based on the fact that I wish I had Prozac in my medicine cabinet, no way.

Because it was an oddly dark affair this year. True, the television world was rocked with several high-profile and tragic deaths in the past few months: James Gandolfini's unexpected passing, Cory Monteith's drug overdose, and Lee Thompson Young's suicide amongst them. And while the tributes delivered to some of the more notable deaths of the year — Edie Falco on Gandolfini, Jane Lynch on Monteith, Rob Reiner on All in the Family's Jean Stapleton — were indeed touching, there's little doubt that they cast a dark cloud over the night's events. (And then there was that odd montage about John F. Kennedy Jr.'s assassination and the tear-jerking acceptance speech from the widow of winning Homeland writer, Henry Bromell.) Even Modern Family creator Steve Levitan noted the mood after picking up his statue for Outstanding Comedy Series, calling the evening "the saddest Emmys of all time."

And it's surprising, considering host Harris can typically brighten any venue. The man has hosted the Tonys and the Emmys to critical acclaim, but his efforts in 2013 shockingly fell flat. The actor might have been accused — during a mock advertisement for a disorder/real advertisement for How I Met Your Mother — of suffering from Excessive Hosting Disorder, but it seemed he had been cured well before the 2013 Emmys.

Not only did his monologue offer no trademark singing and dancing — only an extended clip show and one genuinely funny camera aside from House of Cards' Spacey — but even when Harris put on his dancing shoes, it ended up being as confusing as a night in Harold and Kumar's backseat. Harris' song-and-dance number in the middle of the show seemed like it would have been a great way to break up the three-hour-plus ceremony, but the inclusion of the Emmy Gold Dancers (who? Exactly) only made us yearn for the disastrous Emmytones. At least we knew who they were! (That said, a big props goes to Sarah Silverman and Nathan Fillion for agreeing to play along during the number — the duo appeared to have far more energy than our venerable host.)

In fact, Harris would have been better off skipping the bit entirely and allowing the nominees in the Best Choreography category to lengthen their enthralling dance number, the only true highlight of the evening. Though it was capped with Derek Hough's Dancing With the Stars win — and not a victory from the more-deserving So You Think You Can Dance choreographers — it still made the Best Choreography category the most entertaining of the evening. (I know! I told you this was an unexpected Emmys!) The balletic representations of shows like Mad Men, Breaking Bad, and The Big Bang Theory was a performance that viewers of all ages could enjoy.

I can't say the same for the rest of the ceremony, which was tailor-made for CBS's boomer-aged viewers. Carrie Underwood's (unfortunately off-key) rendition of The Beatles' "Yesterday," a JFK shout-out, shameless shilling of fall TV programming that you hope isn't terrible considering the talent — it's as if much of the awards were targeted only towards those with Two and a Half Men on their DVRs (if they even own a DVR). And the network only continued throughout the evening to convince you to record its programming — Will Arnett and Allison Janney deserve better than being forced to make awkward jokes at the podium about The Millers and Mom, respectively.

More shocking, however, than an unfunny Arnett? The fact that not one series came out as a big winner at this year's Emmys. While Modern Family officially lost all of its goodwill by winning over departed series 30 Rock, even the comedy behemoth could only pull in two wins. In fact, only Behind the Candelabra won more than two, with three awards across the miniseries category. That meant bad news for the aforementioned 30 Rock (poor Jane Krakowski, snubbed again!) and Breaking Bad, which saw Aaron Paul beat out by Boardwalk Empire's Bobby Cannavale and Bryan Cranston beat out by The Newsroom 's Jeff Daniels. We can seek solace knowing the AMC duo still has 2014 to look forward to, but a winner from the sexist Newsroom is not the breaking news we were hoping to field on Emmys night.

That said, there were still some exciting surprises during the ceremony. Baby Buster proved he was all grown up when Tony Hale won the Best Supporting Actor award for his work on Veep (and proved he deserved it when he assisted co-star and fellow winner Julia Louis-Dreyfus during her acceptance speech). And the always daring and always impressive Stephen Colbert finally bested friend and rival Jon Stewart, winning Outstanding Variety Series after the latter's (somewhat undeserved) 10-year lock on the category. It's about time Colbert Nation infiltrated the Emmy ballot.

And along with wins worth celebrating (hello, Breaking Bad 's Anna Gunn and Homeland 's Claire Danes!), there was also at least one speech worth celebrating: Merritt Wever, the Nurse Jackie Outstanding Supporting Actress winner who gave the most conscientious speech in Emmy history: "Thank you. Thanks so much. Thank you so much. I’ve got to go. Bye." (The actress claimed she was too nervous to deliver something longer, but we know she really just wanted to make sure we could all watch Breaking Bad on time.)

As for any more final thoughts to sum up this very confusing, very shocking Emmys ceremony? I've got to go. Bye.