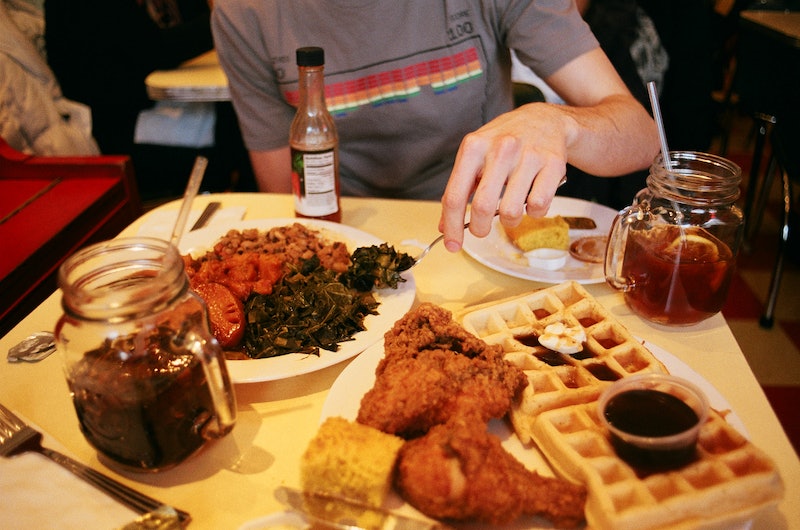 I'll admit it: For a southerner, I've spent a lot of time talking trash about the South. I grew up in the Deep South, and let’s be real — that region has done a lot of naughty, naughty things. We can sometimes make poor decisions, especially when it comes to politics that I simply don't agree with.

Still somehow, as though guilty by association, I have still ended up with the nickname “Auburn” at my new workplace in California, because apparently, being from Alabama means I love college football and find it endearing to be called by a university’s name instead of my actual name. I don’t. And I didn’t even go to Auburn.

But as the saying goes, absence makes the heart grow fonder. Now that I’ve lived on the West Coast for a year and a half, I’ve found myself getting a little nostalgic for Dixieland. It's true, the South can be a really great place (especially if you’re like me and you love to eat), and I find myself feeling all warm and fuzzy for it every now and then. I just can’t help it, bless my heart.

Here are a few things I miss most about the South. If you’re from there too, you know what I'm talking about.

There’s something about a summer thunderstorm. I can’t remember the last time I heard thunder rumbling through the Sacramento valley. I took these storms for granted in the South — especially because the sound of thunder often brought with it the threat of tornados. I’ve spent more than my fair share of time taking cover in bathtubs, closets, and one time under a kitchen table because of tornado warnings. Those are no joke.

While I don’t miss tornado season, I do miss humidity. It’s like a free moisturizer, and even though it feels like walking through hot applesauce at times, I now find myself spending far more money and time on elaborate skin care routines to combat the dry California atmosphere.

After having weight loss surgery and losing close to 200 pounds, I thought I wouldn't really care about fried foods anymore (it tends to not agree with me in gross ways, anyway). It’s been almost eight years, but every now and then, I still get a hankering for fried chicken or fried green tomatoes. Or fried gizzards (hey, don’t knock ‘em til you try ‘em, they’re hideously delicious).

One of the things I miss most about growing up in the rural South is the soundtrack: cicadas like so many aerial lawnmowers buzzing their way through the heat, crickets, and frogs singing me to sleep. They drove me crazy when I lived there, and if you were careless one night and left your car windows down, sometimes they’d end up piled up dead in your windshield, like some kind of mass bug suicide.

Despite that, I miss the white noise those little suckers made that put me to sleep. It was far easier to drift off to them than the fine sounds of my current city, filled with car alarms and what I like to call "the drunken alley walkers."

It’s true that nice folks can be found anywhere. I’ve met some genuinely wonderful Californians that I wouldn’t replace for all the coffee in Costa Rica (and I love that stuff). But there’s still something about southern hospitality.

In the South, it’s standard practice to walk down the street and greet your fellow man or woman with a smile and a “Hello! How are you?” When I do that in California, I’m pretty sure people think I’m up to something. Same goes for when I bake cheesecakes and give them away for no reason. I swear, they’re not poison, I’m just being nice. It's what we do.

I’m not a huge shopper, but I do miss the fact that I could run to the mall, the grocery store, or to a movie on any given Saturday during college football season and pretty much have the run of the place. No lines! No traffic! It was like living the dream. A really fun, kind of eerie dream.

Now, I find California shopping to always be crowded, everywhere, no matter what — even when you think you’re beating the system by getting to Trader Joe’s before 10 a.m. to “beat the crowd.” That never works. People here simply aren’t as devoted to college sports schedules.

The South has some serious major players in the literary canon: We have Harper Lee, Truman Capote, Fannie Flagg, and my main girl, Flannery O’Connor. I dare you to find me a short story that rattles your bones better than “A Good Man is Hard to Find.” There’s just something magical about the way southerners can spin a story. It's no surprise that the storytelling show The Moth was started by a southerner.

These are a dying breed, and if you get a chance to go to a real-life Juke Joint, you should do it. I was fortunate enough to live close to one, and that was four hours of blues guitar, moonshine, and bbq rib sandwiches that I will never forget. The owner was in his 90s and a gravedigger during the day. I’ve tried explaining this phenomenon to a few people not well-versed with the South, and they don’t believe it’s real. But what I wouldn’t give to drive out to that noisy shack on a Friday night…

Before I moved to California, I lived in a large two bedroom, two bathroom apartment in Birmingham. It had tons of parking and a pool, and you could be anywhere fun in five to seven minutes. Rent was around 600 bucks. It seems generally cheaper to live in the South, especially if you're an artsy-type. Now I live in a quaint little shoebox in Sacramento, and let’s just say rent is more than that. Parking is questionable. I miss those sprawling apartments, with patios and ample balconies that you could eat Cheerios on while the thunder rolled in. The glory days!

9. The "Bless Your Heart" Brigade

I'm going to let you in on a little secret: if you ever visit the South, and someone (probably an elderly, sweet grandma-type) says "oh honey, bless your heart," they're basically calling you stupid in a really, really nice way.

In California — and anywhere else, really — people will just call you out on your ditzy moments. I know, because I have a lot of them. And while the direct (and sometimes abrasive) honesty is welcome on this side of the country, sometimes I miss the sassy way people in the South would say, with a simple shake of the head, “bless your heart.” And then they'd give you pie.