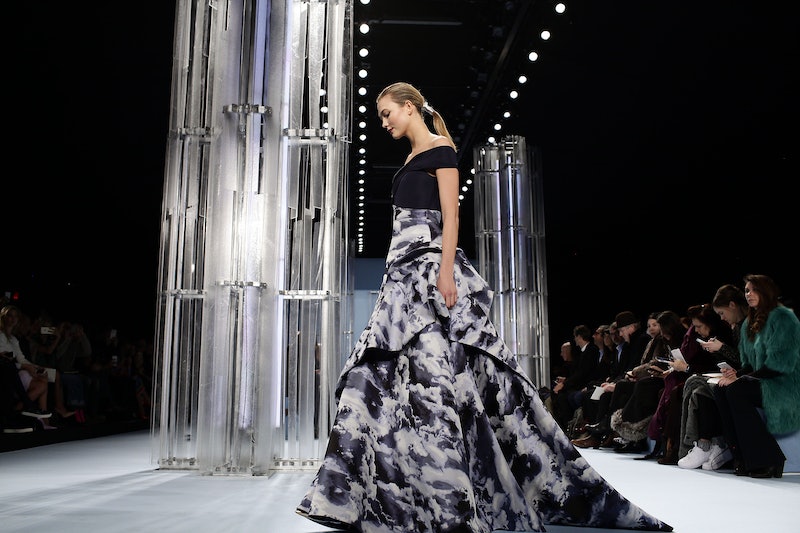 2014 was obviously and most appropriately dubbed "The Year of Taylor Swift" for so many valid and amazing reasons that have been discussed at length, but never ad nauseam, because duh — we love her. I have breaking news for everyone though: She isn't going anywhere and, spoiler alert, there is a strong chance that 2015 is also going to be her year. I know it's a little early in the game to be making such a bold prediction, but alas, with only two months under her belt she has already racked up like, a dozen epic pop culture moments. If you're not a Swift fan (who are you even?) the struggle is real and will continue to be for, well, the remainder of time. A jam-packed January and February and now, an inexplicable link with Carolina Herrera's stunning finale number, have us wondering if Swift really is on track for world domination.

Welcoming in the year like a lion, as they say, Tay proved to the world that she does, in fact, have a belly button. Navel-gate seriously threw the internet into a full blown tizzy and her corresponding vacation with the sisters of Haim had to be the most documented and discussed Hawaiian holiday in the history of the island. Did you hear that? A simple trip to Hawaii and photographic evidence of an extremely normal body part was top news for days thanks to the 25-year-old songstress. If that isn't world domination material, I don't know what is.

Shortly after, the world shed a collective tear when it was announced that Swift wouldn't perform at the Grammy's, yet she still killed it on the red carpet like she was the main event. Sporting a turquoise Ellie Saab dream — a dress that made her look like the the magical, mesmerizing mermaid we've all predicted she might be — and strappy, fuchsia Giuseppe Zanotti's, Swift landed herself atop every best dressed list, continuing her style domination. And you know what? No one even cared that she didn't win any Grammy's because it was still somehow, in part, the T.Swizzle show. Swift bestowed the Best New Artist award on her newly minted BFF Sam Smith, introduced the Grammy's golden boy for his debut performance with Mary J. Blige and added Kanye West to her list of famous friends after quickly reconciling their differences with a cool kid handshake, a truce that flat out blew everyone's mind and is still being talked about.

To wrap up the first two months of her year, the pop culture phenomena was just asked to be her childhood bestie's maid of honor and her adorable Instagram acceptance has likely made the wedding the most anticipated event since the vows of William and Kate across the pond. Literally, millions of potential bridesmaids dresses are being hypothetically mulled over as I type these words by people who won't come within states, even continents, of the actual affair. Also, she has taken "Taylurking" to a whole new level, sending one superfan a check for $1989 to help pay off her student loans, surprising a Swiftie with a meet and greet at The Grammy's and giving genuinely kind, heartfelt advice to a love stricken fan on Instagram. But wait, did I forget to mention that just this past weekend she participated in Saturday Night Live's 40th Anniversary special? Well, she did, and her evening culminated with an impromptu performance of "Shake It Off" with Paul McCartney, as in the Paul McCartney of The Beatles fame, and Jimmy Fallon. NBD.

If you're still questioning Taylor Swift's secret plans of world domination, TBH, I am questioning you. However, there is further proof that she is mysteriously and supernaturally linked to all significant events. Yesterday, Carolina Herrera debuted her A/W 2015 collection at NYFW, which was 46 pieces of fabulous high fashion. However, the piece de resistance was the dark and stormy cloud printed finale dress that stylists have likely been vying for since the close of the show.

NYFW veteran Herrera never disappoints and, while this dress is dream worthy on its own, it is also inexplicably linked to that other small thing Taylor Swift did this year, her new music video for "Style." The cumulus print that decorates the beautifully draped fabric is eerily similar to the clouds the fill the 1989 singer's silhouette in her artsy new video, which is a non-traditional Swift production that shows a whole new, almost indie-creative side.

How do we explain this? While Swift has a plethora of friends, it is unlikely (a.k.a. unimaginable in almost every way) that she and Herrera baked cookies and reviewed mood boards together, so we are going to have to accept the fact that she simply knows the ways of the world and is privy to great knowledge, linking her to all the best things. Taylor Swift is the new "six degrees of Kevin Bacon," except she only needs like, two degrees max. Also, in other coincidental (or not!) news, one of Swift's most famous BFFs, Karlie Kloss, who she also graces Vogue's March cover with, modeled the dress of interest in the show's finale. Visa-a-vis, Carolina Herrera and NYFW have proved, once and for all, that Taylor Swift is taking over the world.