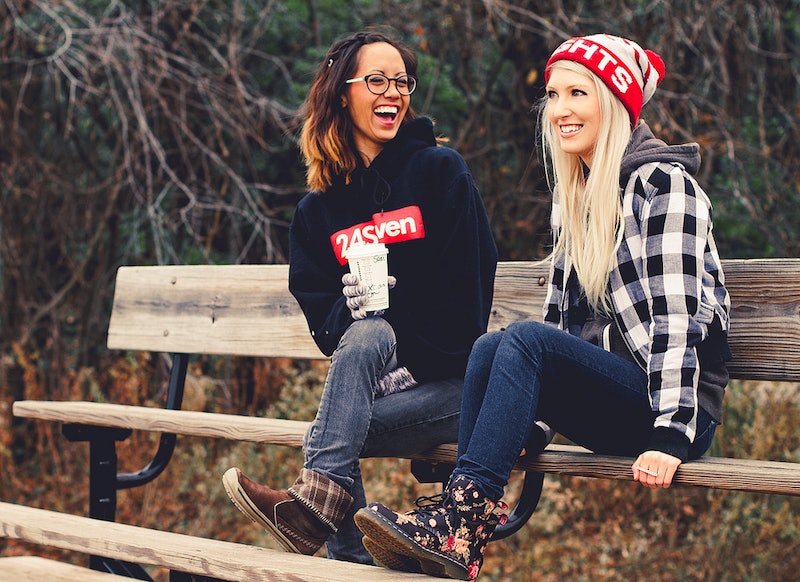 We spend upwards of 12 years actively resenting school for getting in the way of more important activities, such as sleeping in, ineffectually smoking cigarettes in grocery store parking lots, and participating in invigorating air hockey tournaments held on basement grounds. However, this academic environment gets little applause for the rare and important social opportunity with which it blesses us: a non-creepy chance to meet new people and nurture developing friendships. In school, there are so many built-in ways to make friends. You sneakily flick off the professor together, panic about exams together, pull caffeine-fueled all-nighters during finals week together. Eventually, we graduate and enter adulthood, a barren, sprawling landscape littered with disintegrating metabolism, crushing hangovers, thoughts on health insurance, and far fewer shots to forage platonic relationships amid the sea of new faces all going about their lives. Water, water everywhere and no one to have a slumber party with.

Frankly, as an adult, it's easier to propose an actual date than a taco hang with no promise of sex whatsoever. You can't just strut up to a stranger and ask their number because, well, they look like someone who'd also be down to smuggle tiny wine boxes into the new Katherine Heigl movie, too. Well, you can, but it's generally not greeted warmly. There seem like a million ways to creep out a stranger, and painfully few legit ways to go about making an honest-to-god new friend.

So, all potential pitfalls considered, how exactly do you make friends after the slow sunset of state-mandated (or elective, higher) education when your office is either tiny or completely void of friend options (or both!)? Especially if you've moved to a new city as an adult (like so many of us do at least once), you'll understand the phases and flow of scouring for sex-free solidarity. It isn't easy, but it is possible. And dear god, is it awkward. Awkward AF.

It's best practice to approach any new, otherwise unavoidable event in life with a grin, right? The same applies to scoping out a new horizon and its pal potential.

When you move to a new city, you treat the place and all its offerings the same as the first month of living in the college dorms as a freshman. Pretty much any activity with any person is worth trying out. It's true you probably won't continue to make a weekly ritual of yoga as practiced to a metal soundtrack, but at least you gave it an honest go.

Filling your social calendar to capacity

Back in your old town, you rarely suffered FOMO because you had a comfortable circle of friends who didn't mind infrequent bouts of being ignored in favor of you staying home to eat a whole pizza. Here, in a place where you only barely know a small number of people, you're much more likely to have hangs planned each night of the week. In one way, it looks like you're prioritizing a social life higher than before. But in reality, you're just actively hunting for a new crew of ride-or-die friends. It's like speed-dating, but again, the no-sex thing (in most cases; I don't know your life).

Quietly sizing up friends-of-acquaintances is seriously the best way to scout out cool people to add to your "Who Should I Hit Happy Hour With?" on-call list. The best way to find these people is accepting every potluck and house party invitation extended your way. Armed with this knowledge, you get real ace at whipping up edamame hummus and homemade red Sangria while attending as many of these events as possible.

Hosting many events yourself

Would you have ever even considered throwing a clothing swap at your apartment before? Of course not! But these people don't know that and you don't know them, so it's time to fix the latter part of that.

After exhausting yourself with a packed out agenda, your sleep deprivation may shift into pessimism. You miss the long-sailed ship of making friends with ease. You miss your old friends. You probably do some light to moderate Facebook stalking until you feel certifiably bad. You can't keep pretending you enjoy Pilates or red Sangria much longer. You lose hope for a moment.

You scan the crowd at the plaid-themed dinner party for the other person who only resentfully attended. Maybe they're wearing a button spouting support for your favorite record label or featuring a slice of pizza. Hone in and see if you can't trick them into sharing a snarky exchange or two.

They're the best at Simpsons references, always carry a Koozie, has a really cool day job, can paint the perfect cat eye even on a super crowded train, and admittedly also hates plaid! This. Person. Is. So cool!

By the time we coast into our mid- or late-20s, we have a semi-formed idea of who we are and what we're about. In a lot of cases, too, we have an established circle of friends. So when you're on the outside of all these complicated, concentric circles, it seems impossible to infiltrate. Why would they want to break just enough space to let you in, too? What if that never happens? It's weird how waiting to see if someone you're trying to friend actually does make good on a promise to text you next week about that gallery opening can cause actual anxiety. WILL THEY OR WON'T THEY?! Dating is not nearly this ambiguous.

It's like a first date, really. Yanked from the group setting, spending time with just one other human can be a little intimidating. You have half the responsibility to carry the conversation instead of 1/8th. But this is a good way to gauge actual compatibility.

Developing a routine with new people

For me, at least, I don't consider a friendship fully formed until we share a certain level of vulnerability. This can be in the form of unveiling a secret, confiding, or general bitching regarding anything more personal than the weather or extra guac charges.

Cutting down on non-essential obligations

At some point in your adulthood, you'll finally feel like you have a solid enough group of ACTUAL FRIENDS that you no longer feel obligated to attend any and all social functions in an effort to find new people. "Oh, it's drinks celebrating the decision to move and not the actual bon voyage bash? Skiiip." It's a glorious feeling to have enough of a social support system in place you can afford nights off from all humans other than the takeout delivery person.

Falling back into a limited social life with your new squad

Once you finally solidify a good group of people you can trust, have fun with, and feel inspired around, you may safely retreat back to your mostly reclusive ways, save Taco Thursdays with your tiny crew. Isn't adulthood great?