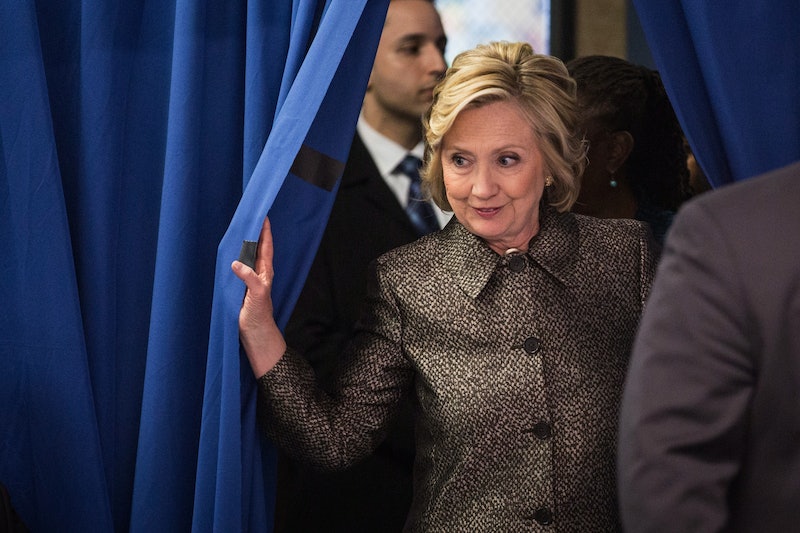 In many ways, Hillary Clinton's presidential campaign is something special. For one, many people expect you to rationalize your support for her campaign. "Why Hillary?" they ask. "Why not?" you likely think. This is the most difficult part of being a Hillary fan: conversing with people who feel the need to ask why you prefer your favorite candidate. You probably wouldn't need to justify your support for something as universally appreciated as tacos or mini microwave pizza bagels, but then again, not everyone has good taste. So here we are, justifying our appreciation for Hillary Clinton. How can you make this important conversation count for the person you are talking to?

Since people are naturally self-oriented — some of us more so than others — the most effective way to reach them is often by making the issue about them. This is why there are so many arguments for men to support feminism that are good, but don't really get to the heart of the issue. Because it's hard to get people to support a cause that doesn't directly impact them, pro-feminism arguments directed at men often focus on the women who are close to them — sisters, daughters, wives, mothers — instead of women at large.

Sometimes, coming up with ways to help someone identify with a cause you care about can be easy. For example, if you're trying to turn your female friend on to feminism, you can remind her that she is a woman and feminism is dedicated to equal rights for women. In the case of being a Hillary supporter, it's even easier to find ways to show people how awesome it is, and they can apply to anyone. Here are seven situations where being a Hillary supporter benefits you.

1. When You Need A Quotable Quote

Everyone knows Hillary is the queen of quotes, whether they're motivational, White House-ready, all about love, or excitingly empowering.

2. When You Want To Ask A Feminist On A Date

3. When You Want To Watch A Great SNL Sketch

There are so many unbelievable Clinton sketches on SNL, betcha can't have just one. Though Amy Poehler and Tina Fey as Clinton and Sarah Palin are instant classics, Kate McKinnon is not about to be beat either.

4. When You Want A Funny President

It's hard to beat President Obama's sense of humor, but Clinton is up to the challenge. Her hilarious turns on The Colbert Report and other talk shows prove it.

5. When You Want Awesome Gear To Support Your Favorite Candidate

There are literally so many Hillary accessories on Etsy, it's impossible to count. And counting isn't worth your time either. Just buy them all.

6. When You Need LGBT Resources

Hillary is dedicated to helping legalize gay marriage and push for gay rights.

7. When You Just Have To Have An Action Figure Of Your Favorite Candidate

At this point, if you've gone through all these scenarios and the person you're talking to still needs one more thing to convince them, it's time to bring out the action figure. No one can resist a great action figure, and there's just no way a Bernie Sanders doll would have quite the same effect.

More like this
Sandra Bullock, Girlboss Extraordinaire
By Matt Harkins & Viviana Olen
10 Times Diana & Meghan Spoke Similarly On The Royal Family
By Sophie McEvoy
Ryan Seacrest's Net Worth: 'American Idol' Makes Up Only Half Of His Wealth
By Hugh McIntyre
Here’s How To Reignite The Spark In A Sexless Relationship
By Vanessa Marin
Get Even More From Bustle — Sign Up For The Newsletter