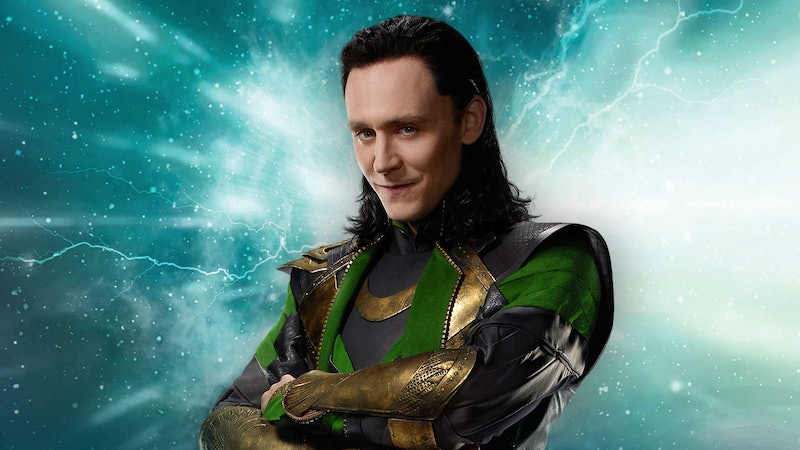 Was there anything more disappointing than going into Avengers: Age Of Ultron knowing that Tom Hiddleston had filmed a super-secret scene, only for Loki to never materialize? (Answer: no.) Sadly, whatever the handsome 34-year-old British actor filmed for Marvel's mega-sequel ended up on the cutting room floor, and Hiddelstoners all over the world over cried themselves to sleep. Obviously, the only way Disney will be able to make this up to us is by giving us the Loki solo movie we all so desperate crave, right?

And no, I'm not talking about the supercut of all Hiddleston's Marvel footage edited into one Loki-centric film, as awesome as that was. I'm talking about a brand new, all-Loki, all-the-time movie. I know this seems unlikely, given that Disney has all of their Marvel movies planned out through the release of Inhumans in 2019 — but they've already proved their open to re-shuffling their schedule: after the studio regained the rights to use Spider-Man, they inserted a solo movie for that character into their pre-planned slate, bumping everything back by one slot starting with 2017's Thor: Ragnarok . Surely they can make room somewhere for a Loki movie — as well as that Black Widow standalone film we've all been clamoring for.

Given the cruel bait-and-switch Marvel gave us in Ultron, we deserve a Loki solo movie. Here are eight reasons Disney should seriously consider it:

Thor is a character you can always depend on to deliver a good fish-out-of-water joke, or to crush some skulls with his hammer. But he's far from the most interesting creation the Marvel Cinematic Universe has conjured up: Both 2011's Thor and 2013's Thor: The Dark World were ostensibly solo movies for the God of Thunder, but let's all be honest about who they really belonged to. Hiddleston's devious God of Mischief is infinitely more interesting than his stalwart brother, because his villainy is what made those movies so fun to watch.

Back in 2009, Loki came in at #8 on IGN's ranking of the 100 best comic book villains of all time. Just ahead of him were such world-famous icons as the Joker, Lex Luthor, and Magneto. Even more impressive? This was two years before Thor hit theaters, when Hiddleston's portrayal of Loki made the villain more popular than ever. It's widely agreed upon that the MCU has a villain problem: Marvel hasn't yet produced any antagonists that will go down in history alongside such classics as Heath Ledger's Joker, Michelle Pfeiffer's Catwoman, or Ian McKellen's Magneto... Hiddleston's Loki being the exception that proves the rule, of course.

3. He Can Easily Carry A Film

Not only is Hiddleston a capable enough actor to carry a film on his shoulders (just look at the Crimson Peak trailer for further proof of his magnetism), but Loki has plenty of story to draw from in the Marvel Comics. He ruled Asgard for a time; he had a child named Son Of Satan; he died; he was resurrected as a boy; he joined the Young Avengers; he was even a woman for a while, taking the form of Lady Sif! Long story short, there's more than enough source material to craft a two-hour film around.

4. It Could Fill In Some Plot Gaps

A Loki solo movie could give us a glimpse at events only hinted at in the MCU so far. What exactly happened after Loki fell from the bi-frost? Where did he go? How did he get back? When and why exactly did he ally himself with Thanos? Did he ever explore his hereditary connection to the Frost Giants of Jotunheim?

5. It Could Include Other Popular Characters

Throughout the years, Loki has interacted with several supporting players of the Marvel universe who deserve to be given a chance to shine on the big screen. For instance, he once sent Mr. Hyde (played by Kyle MacLachlan on Agents Of S.H.I.E.L.D.) to kidnap Jane Foster; he allied with Spider-Man on a rescue mission; he joined Norman Osborn's Cabal of villains, including Doctor Doom and Emma Frost; and he even disguised himself as Wanda Maximoff, aka Scarlet Witch, one of Ultron's newest additions to the MCU.

6. Hiddleston's Already Got Some Ideas

When asked by Collider about the possibility of a Loki solo movie, Hiddleston had an idea ready to pitch to Marvel: "There are things I'd love to do with him," the actor said. "Like, I'd love to see him out of context on Earth, in the '70s running a nightclub, playing lots of Rolling Stones." Sold!

Right now, the MCU is dominated by chesty white dudes named Chris. (See above: Hemsworth, Evans, Pratt). It's about time a skinny white dude named Tom got a chance, don't you think! Not to mention, by 2019, we'll have 22 Marvel films centered on heroes — it's high time for a film with a villain as its focus!

(And yes, those gratuitous gifs were absolutely necessary to prove my point.)

8. The More Tom Hiddleston The Better