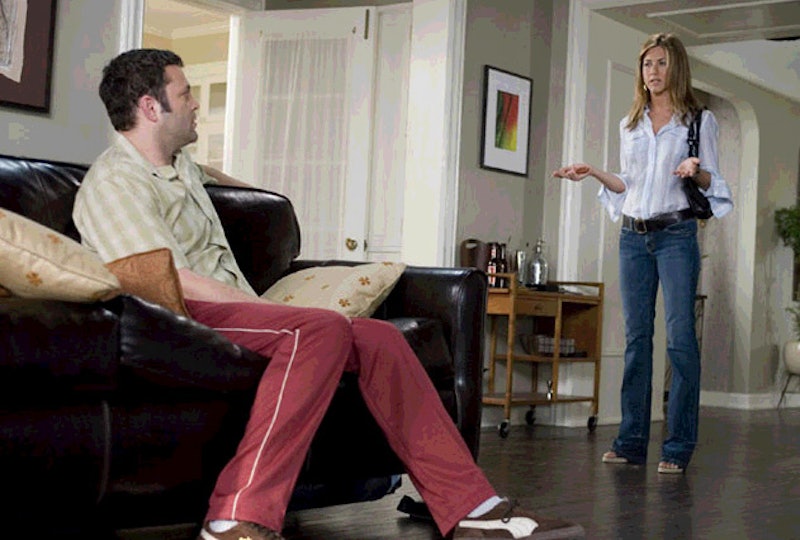 Raise your hand if you’ve never dated someone who still had a lot of growing up to do. Now, I see that only a few of you have your hands up and I’m just going to go out on a limb and invite all of the lesbians to leave the room now. We can talk later, ladies, but this post is for those of you who know what’s it like to think you’ve locked it down with a grown-ass man, only to find that — surprise! — he’s still a baby in so many ways.

You know what I’m talking about. You meet a guy at a party, he’s super hot, you start sleeping with him, then you start hanging out more and more until, suddenly, you want him to meet your friends. He’s moved from casual friends with benefits to someone you’d like to show off in the light of day.

Unfortunately, sometimes it takes making it all the way to that stage before you start to realize that your manly man still has a lot of boy in him. Luckily, this phenomenon occurs most in your early ‘20s, when you still have quite a bit of growing up to do yourself but it’s been known to crop up in every decade of life. Obviously, it’s an issue with some women too but the man/boy phenomenon is what we’re going to examine here.

So, without further ado, here are six signs that you’re dating someone who still has a bit of grown up to do.

1. Doesn’t know how to do his own laundry.

This one is a big one and probably the most obvious. If your boyfriend is older than 20, he should know the difference between the delicate, permanent press, and normal cycles. He should be washing his clothing at least once a week, without ruining even one item. If he expects you to take over that task for him, it’s time to remind him that you’re not his mom and place the bottle of detergent in his hand.

Of course, that doesn’t mean you can’t throw his dirty clothes in with yours sometimes. Just don’t let him (or yourself) fall into the pattern of being his maid ‘cause he doesn’t know — or expect to do — it himself.

Oh girl, let me tell you from experience: it’s time to get out. I was dating one of these guys for a while in New York City, the hometown of man/boys. We had a great sexual connection, he was fun to hang out with, we were spending at least three nights a week together. After around three months of that, I shyly asked him if I could call him my boyfriend. He came back with the classic “Why do we need labels?” and I went along with it because I was lonely and he was hot.

A couple months later, I saw topless pics from another girl on his phone when he was showing me a picture of the dog. That’s why, Ron. That’s why.

3. Only talks about his feelings when he’s messed up.

Despite what generations of strong and silent may have taught both men and women about masculinity, I truly believe that real men talk about their feelings. If the only time he can say “I love you” is when he’s been drinking or drugging, then he’s got some emotional stuntedness that is going to take a lot of time and therapy to fix. It’s up to you if you want to stick around for that process but just know that it’s a long one.

Tantrums are for babies, not grown-ass men. A college boyfriend once threw a table across the room when we were fighting. I spent the next 15 minutes collecting all of my possessions, shoving them into my car, and planning out how I was going to dump him because that kind of behavior does not stand in my book.

If you could picture your boo red faced and pounding on the floor, screaming, “But it’s not faaaaairrrrr!” then you might want to reevaluate whether you signed up to be a girlfriend or a babysitter.

5. Can’t keep track of his own schedule.

Just like you’re not his mom or babysitter, you’re also not his secretary. Unfortunately, a lot of hetero relationships end up falling into these gendered archetypes if you’re not aware of them — blame society for drilling them into our collective subconscious. Part of being a grown-up is keeping track of things like your appointments and buying gifts for your loved ones. Unless you’re getting a paycheck, you shouldn’t be taking care of those things for him. Buy him a planner if he’s old school or download a scheduling app if he’s not. Either way: not your job.

6. Fights with you about stupid things.

Grown men and grown women know that some fights just aren’t worth having. Sure, there are things that annoy you or things you wish were different but good relationships are all about knowing which battles are worth fighting and which ones just… aren’t. If you're boyfriend thinks that your bad habit of leaving water glasses around the house is on par with his inability to stand up to his mom when she talks smack about you, for example, that’s a sign that you’re with someone who doesn’t know how to not sweat the small stuff.

Got all of that? Good. Now go find yourself a grown-ass man, you badass woman, you.