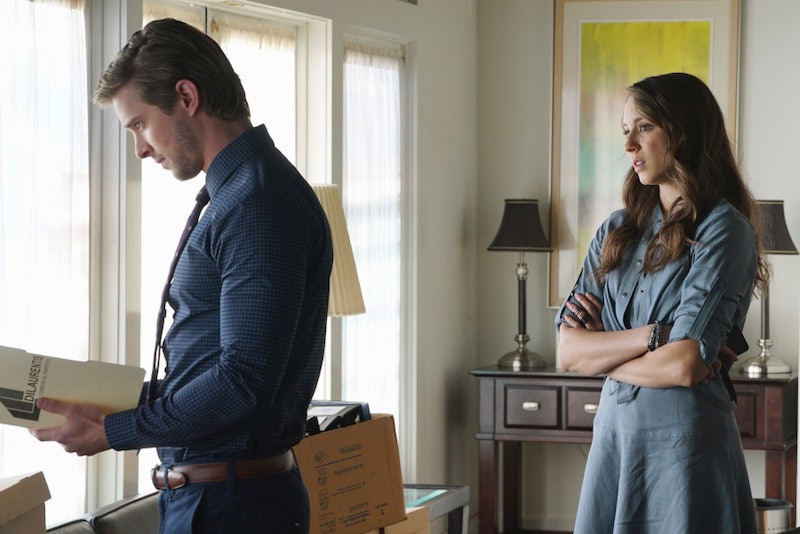 Since the #BigAReveal in last season's Pretty Little Liars finale, fans have all been going off of the assumption that Charles DiLaurentis is Jason's twin. I mean, it makes sense, right? The two boys in that infamous Campbell Farm video looked about the same age, and come on, the show's mythology is overflowing with clues about twins. That said, even with all of the circumstantial evidence stacking up in favor of the twin theory, it's starting to seem more and more like a red herring... could Jason and Charles not be PLL's twins?

Cast and crew alike have been characteristically tight-lipped about Charles' true identity. We know that he's a DiLaurentis, but other than that? We're pretty much in the dark. That said, executive producer Oliver Goldstick tossed us fans an enigmatic bread crumb in March. When a TVLine reporter asked him if Charles being Jason's twin was a "fair assumption," Goldstick replied, "It’s a fair assumption, but don’t go to Vegas on that one."

It's nothing certain, but unless Goldstick is majorly yanking our chains (or speaking with his fingers crossed behind his back), that's pretty solid evidence to start looking for explanations that don't involve twins. So how else could Charles be connected to the DiLaurentis family?

The first option's pretty obvious: Even if he's not a twin, Charles could still be a brother to Jason and Ali. Perhaps he's an estranged brother who spent a lot of time at Radley, which would explain why his siblings don't have memories of him.

One of my favorite awesomely out-there Charles theories, courtesy of Reddit's Iyoushe, is that Charles (along with Bethany Young) could be Ali and Jason's cousin, by means of Jessica's identical twin sister. Now, there's little evidence to prove such a twin exists, outside of the fact that we know Bethany Young addressed Jessica with the term "aunt" and that Bethany looked eerily similar to Ali, but crazier things have happened on PLL, right?

Another popular theory, from thebestplltheories on Tumblr, is that Charles could be Peter Hastings ' secret love child (again). After all, Jason's his son, so why couldn't Charles' be as well? Heck, in the PLL book series, even Ali is secretly Mr. Hastings' daughter.

Besides, Mr. Hastings has always seemed like he was up to something ... is it because he's been harboring/helping/hiding his son this whole time?

Charles could easily be a DiLaurentis without being blood related to Jason, Alison, or anyone else on the show. Maybe the family adopted him as a child, but something went wrong and he was sent away. It would fit in with Keegan Allen's assertion that A's motives are "heartbreakingly beautiful."

Popular candidates for this theory include Ezra (seriously, dude is mad suspicious, not to mention creepy as all hell), and Wren (ditto, ditto). Wren in particular is seeming more and more like a real A contender lately... and besides, the reveal that a characters as well-established as Wren or Ezra is actually Charles would be hugely satisfying and cathartic.

All I know is that the suspense is a real killer. Whether or not he's Jason's twin, I can't wait for the PLL Season 6 finale to unmask Charles once and for all.