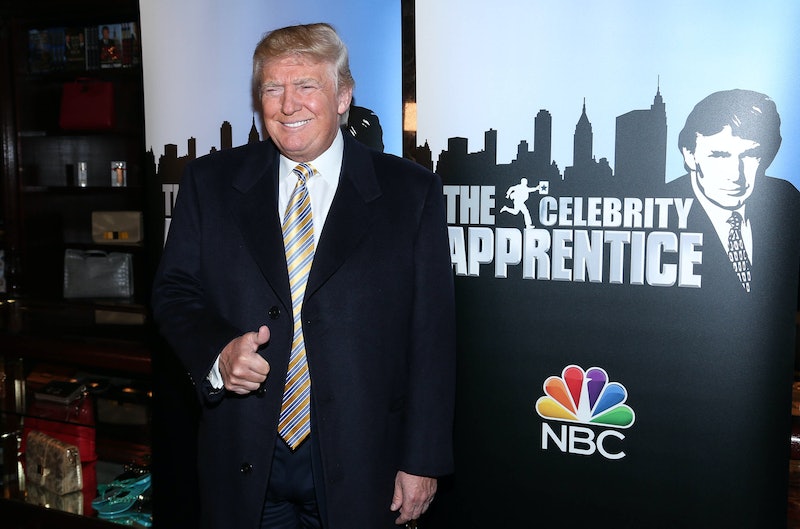 Oh, what a tangled web Donald Trump weaves. The real estate mogul/presidential hopeful set off a chain of reactions after comments Trump made about undocumented Mexican immigrants in the United States. Among the repercussions are Macy's cutting ties with Trump and his menswear line, and NBC ending their partnership with the businessman. Additionally, the Miss Universe and Miss USA pageants will no longer be broadcast on television. Of the many questions remaining, one of the biggest is what will happen to The Apprentice now?

I don't see Trump mending his relationship with NBC anytime soon. After the network cut ties with the mogul, he responded by releasing a statement that said, "Mr. Trump stands by his statements on illegal immigration, which are accurate. NBC is weak, and like everybody else is trying to be politically correct — that is why our country is in serious trouble." Yeah, as Taylor Swift would put it, now they've got bad blood. However, that doesn't mean NBC won't air the show. In fact, the network released a statement on June 16, following Trump's presidential bid announcement, that said, "We are committed to this franchise. We will re-evaluate Trump’s role as host of Celebrity Apprentice should it become necessary.”

The network re-affirmed this sentiment in the statement they released following Trump's remarks. "Celebrity Apprentice is licensed from Mark Burnett’s United Artists Media Group and that relationship will continue," NBC said.

Of course, this leaves the questions of who will host The Apprentice. While Teen Mom star Farrah Abraham seems to have volunteered herself for the job, neither NBC nor Mark Burnett have officially addressed the topic. If the show is looking for a member of The Apprentice's family to host, the natural suggestions are its most-high profile winner, Bill Rancic, or the infamous contestant Omarosa. However, neither of them has publicly commented either.

The latest installment of the franchise, Season 4 of The Celebrity Apprentice, aired its finale in February 2015. Given that the next season hasn't even filmed, the fate of the show remains up in the air for now. At least until they find a new host. As for Trump, the full text of his representative's statement to Bustle regarding the termination of his relationship with NBC can be read below:

More like this
Kim Kardashian Remembers Her Last Words To Death Row Victim Brandon Bernard
By Jake Viswanath
What’s New On Netflix: 'Stranger Things' & 'Somebody Feed Phil' Return
By Arya Roshanian
What’s New On Netflix: A Victoria Justice Rom-Com & The Return Of David Letterman
By Arya Roshanian
Yes, Billboard Queen Angelyne Really Ran For Governor Of California
By Brad Witter
Get Even More From Bustle — Sign Up For The Newsletter