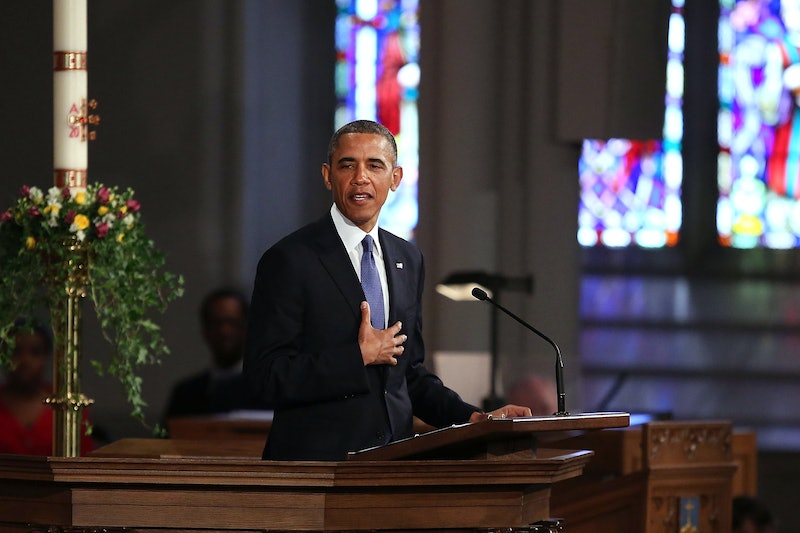 This week, President Barack Obama told a bunch of Democratic donors that he is “not a particularly ideological person.” At a Seattle fundraiser Sunday, the President explained that there are particular issues that pique his interest — national defense; giving everyone a “fair shake” — but that he’s open-minded about the means used to get there. To which we say: “Yeah, but also: yeah, right.” Sure, there can be more than one route to achieve a certain solution. But Obama has strong views and strong beliefs, and sometimes there’s just no room for compromise.

We bring you the Book of Barack: 10 “commandments” that the president follows to the letter.

1. Thou Shalt Use a Blackberry

It was one of the biggest jokes of the 2008 presidential campaign — that, upon taking office, Obama would have to relinquish his prized Blackberry smartphone. (Can’t be texting state secrets once you’re Commander-in-Chief!) It seemed like the country breathed a collective sigh of relief when the president got special privacy software installed on his right-hand device, which enabled him to keep using it post-election.

As recently as a year ago, Obama was still pictured with the trusty device in hand. But come on, Barack: now that Blackberry’s going under and you can BBM on an iPhone, it's definitely time to switch.

2. Thou Shalt Rely on Social Media

Even before his social-media-heavy terms in office, Barack Obama was using online networks to ride the tidal wave of technology straight to the White House. His 2008 campaign relied on heavily organized but decentralized networks of volunteers recruited through social networks, and the digital strategy was overseen by a boy-wonder Facebook co-founder.

Now that he’s in office, though, Obama prefers to use online social networks to communicate his ideas (and his spin) directly to constituents. As Bustle reported:

The Obama administration has an advantage that Nixon’s didn’t, though: direct access to voters and constituents through social media and other online venues. The administration even produces its own weekly news segment, with “events the press didn’t even know about,” said Ann Compton of ABC news. Frank Sesno, formerly of CNN, said, “Open dialogue with the public without filters is good, but if used for propaganda and to avoid contact with journalists, it is a slippery slope.”

The administration’s desire to control their message even led them to bar press photographers from many important events, instead choosing to release their own photos on Flickr.

3. Thou Shalt Not Allow Whistleblowers

In this area, Obama gets an A+ — or an F, depending on how you look at it. The Obama administration has been ruthless in prosecuting persecuting whistleblowers. Once upon a time, the president’s Change.gov transition page contained a paragraph extolling their virtues:

Often the best source of information about waste, fraud, and abuse in government is an existing government employee committed to public integrity and willing to speak out. Such acts of courage and patriotism, which can sometimes save lives and often save taxpayer dollars, should be encouraged rather than stifled. We need to empower federal employees as watchdogs of wrongdoing and partners in performance. Barack Obama will strengthen whistleblower laws to protect federal workers who expose waste, fraud, and abuse of authority in government. Obama will ensure that federal agencies expedite the process for reviewing whistleblower claims and whistleblowers have full access to courts and due process.

Yeah ... that ain't happening anymore. Just ask Chelsea Manning, Edward Snowden, or any of the less well-known whistleblowers of the last five years.

The administration has prosecuted more whistleblowers under the Espionage Act than all former presidents combined. Chelsea Manning, who leaked thousands of classified cables (and exposed serious violations) to Wikileaks is now serving out a multi-decade sentence, and Obama won’t pardon her. Edward Snowden, the notorious whistleblower who took his NSA files to journalists at The Guardian and The Washington Post, fled to Honk Kong ahead of the revelations. He now lives in Moscow on temporary asylum, with a new job and a new girlfriend. If he ever comes back to America, he'll be swiftly charged with espionage.

Whatever his flaws, Obama has always been a huge supporter of women, both inside his family and outside of it. Obama has credited his daughters for helping “change” his mind on marriage equality, and nominated not one but two women to the Supreme Court.

So it’s not surprise, then, that the first law Barack Obama signed upon becoming president was the Lilly Ledbetter Fair Pay Act. The act was named for a 75-year-old Alabama native who sued Goodyear after retirement because she felt she was earning less than her male counterparts.

5. Thou Shalt Not Worship False Idols

Or, at least, so he says. Obama’s belief in the Christian God might be the one thing he definitely hasn't flip-flopped on.

He did, however, ditch his old pastor during his bid for President. Flashback to 2008: The far Right was obsessed with outing Obama as a secret Muslim, no doubt due to the middle name “Hussein” that Obama had inherited from his father. During the 2008 election, Obama’s former pastor from the Trinity United Church of Christ in Chicago, Jeremiah Wright, was embroiled in a controversy over some controversial sermons he had given. Rather than stand by him, Obama quit the Trinity United Church, labeling the reverend’s statements “divisive.”

6. Thou Shalt Not Let Israel Decide Your Foreign Policy

Remember the 2008 election, when my grandparents (and maybe yours, too) complained about how Obama wasn’t strong enough on Israel? Well, they weren’t completely right, or completely wrong — Obama took a much more parent-y approach to America's key Middle Eastern ally, keeping the Jewish state’s best interests in mind but refusing to let its politician’s tantrums drive American foreign policy.

This was most clearly illustrated last weekend, when world powers negotiated a nuclear deal with Iran over Israel’s objections. Secretary of State John Kerry called bullshit over Israel’s concerns about the agreement, arguing that the nuclear deal actually grants it more security.

7. Thou Shalt Not Torture

For what it's worth, it seems that certain illegal "enhanced interrogation techniques" have stopped with Barack Obama (sorry, Dick Cheney!), though the prison at Guantanamo Bay is still operational. Props to Obama for that. Though the President had campaigned to shut down the notorious Cuban prison, which just turned 12, his attempts to do so have been somewhat stalled by Congress.

"Gitmo" gained notoriety during the Bush/Cheney administration after numerous revelations that the military personnel running the prison were acting in flagrant disregard for the law, fueled by the ambiguous status of the prison’s detainees. There were allegations of sex abuse and religious disrespect, and old-school torture techniques like waterboarding.

(Now, they just force-feed you.)

It was the pronunciation that made the liberal intelligentsia swoon: after Bush's "Eye-rack" and "Eye-ran", the newly elected President of America' correct pronunciation of countries around the globe added to his worldly image.

Despite the PC vocalizations — he's not calling anybody PAK-ee-stan or EYE-rack — Obama has dramatically expanded the (apparently illegal) drone strikes all over the region. The strikes have come under heavy criticism for causing many civilian casualties, but the President has shown no intention of slowing down.

Here’s a pronunciation guide via the Washington Post, which will help you speak just like the President.

Iraq: ee-ROCKHow it's NOT pronounced: EYE-rack

Qatar: KUH-tur (almost exactly "cutter" but more emphasis on the first syllable)How it's NOT pronounced: kah-TAR

Pakistan: pah-kee-stahn*How it's NOT pronounced: pakky stan * Both of the a's should be pronounced as in paw, not as in pat. This is true of most a's in this section.

9. Thou Shalt Have Healthcare

Obama's utter unwillingness to back down and compromise during the renewed battle over healthcare reform — you know, that whole shutdown thing — was a sign of his commitment to the cause, and one of the few times in recent memory that liberals swooned once again for their president.

“Think about that,” Obama said in response to GOP efforts to derail the law. “Affordable healthcare is worse than a law that lets slave-owners get their runaway slaves back. I mean, these are quotes. I am not making this stuff up.”

He refused to allow any more compromises on his signature legislation, even as the Republicans ran the federal government into a shutdown and threatened to make the nation default on its debt. And that’s leadership, ya’ll, even though the law doesn’t quite have a public option or anything else anyone wanted.

But everything can wait until it's politically expedient. Yep,Obama, we haven't quite forgiven you for your well-timed "evolution" on same-sex marriage equality, or that bit where you deported more undocumented immigrants than George W. Bush before pushing for immigration reform. Or, for that matter, your stunt with underage women’s access to emergency contraception. Shall we go on?

Let’s hope that the next few years will be more fearless — but in the marriage-equality way, not the drone way.