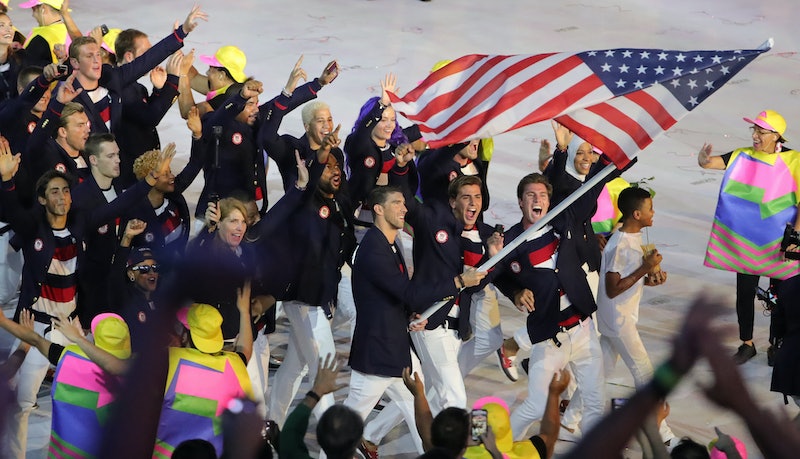 A state of emergency and Coco Gauff and Sha’Carri Richardson’s absence from the Summer 2021 Olympics aside, the Tokyo event will go on. And as with every Olympic Games, the traditional Parade of Nations during the Opening Ceremony will launch this year’s multi-sport competition. The Parade of Nations is usually flanked by thousands of athletes from around the globe as attendees cheer them on. But due to the coronavirus pandemic, things will be much different than in previous years.

For the first time in history, fans are barred from attending the competitions, and athletes will have to adorn themselves with their medals. The Parade of Nations is not exempt from special restrictions either — spectators (save for members of the International Olympic Committee, diplomats, foreign dignitaries, Olympic sponsors, First Lady Jill Biden, and French President Emmanuel Macron) are banned from going to the parade, and, according to USA Today, it’s highly likely that many Olympic competitors won’t be able to walk in the procession either. It’s noted that “many athletes will not be permitted to arrive in Japan” until after the parade’s end.

Amid these drastic but necessary changes, it’s important to take a look at the history of the Games’ celebratory march, including the meaning of a country’s order and who will proudly carry the United States flag in 2021.

The History Of The Parade Of Nations

The very first Olympics was held in Athens, Greece, in 1896. Though Guinness World Records recognized the 1908 London Parade of Nations as the first on record, Olympic historian Karl Lennartz notes that the first Parade of Nations technically occurred in 1906 “at a multisport competition organized in Athens to celebrate 10 years of the first modern Olympic Games.”

It was in 1906 that a group of athletes “marched in rows of four” behind the respective flag holder, with Greece as the designated host nation. As the host that year, Greece proceeded into the Panathenaic Stadium last. This same Olympic tradition, now famously known as the Parade of Nations, continues today.

The Parade Of Nations Order

The Parade of Nations is a visual feast. The cavalcade of athletes proudly celebrates their country, heritage, and sports in eye-catching uniforms. The order in which each country walks into the stadium for the Opening Ceremony holds significant meaning. Greece was historically where the inaugural Olympics were held, so the country traditionally enters the stadium first and leads for each Parade of Nations. The host country enters and marches last, as Greece did all those years ago. All of the countries between Greece and the host arrive in alphabetical order. For the Summer 2021 Olympics, viewers should expect to see an upholding of certain traditions at Japan’s New National Stadium.

The job of being a flag carrier for the Parade of Nations is a huge deal and can even come with international fame, as was the case with shirtless and oiled-up Pita Nikolas Taufatofua of Tonga in 2016. In the case of Team USA’s flag bearers, the honor has been granted to Olympians Sue Bird and Eddy Alvarez. Bird is a four-time Olympic champ and WNBA player for the Seattle Storm, and Alvarez has won an Olympic silver medal in speedskating and is a professional baseball player. Both will be easy to spot as they’ll be seen wearing fashionably cool (literally) white jackets, courtesy of Ralph Lauren.

More like this
'GoT' Star Emilia Clarke Says She "Just Can't" Watch 'House Of The Dragon'
By Brad Witter
The Black Lotus Staff Has "Had Enough" In The 'White Lotus' Spoof From 'SNL'
By Brad Witter
Here’s Why Danny Masterson’s Hyde Isn’t In 'That '90s Show'
By Brad Witter
'RHOSLC' Star Jen Shah Refuses To Do A Post-Sentencing Interview With Andy Cohen
By Brad Witter and Jake Viswanath
Get Even More From Bustle — Sign Up For The Newsletter
From hair trends to relationship advice, our daily newsletter has everything you need to sound like a person who’s on TikTok, even if you aren’t.