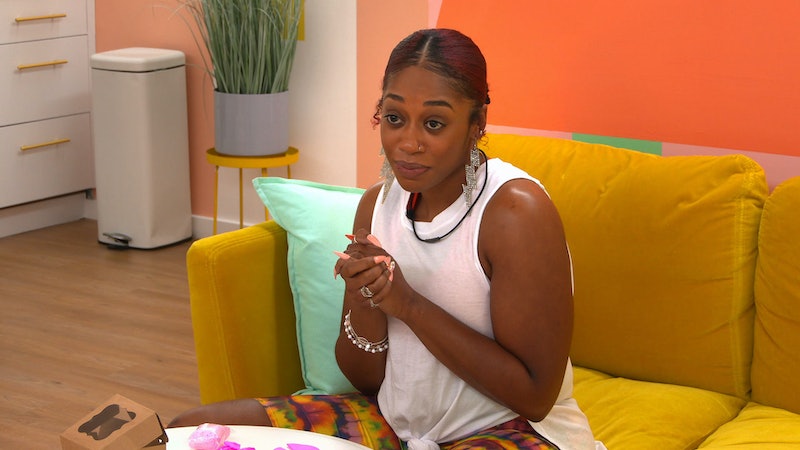 During The Circle Season 3 finale, Kai Ghost teased that she was open to dating fellow contestant Calvin Crooks. But after filming the series, Kai realized that they’re much better off as friends.

“Oh no. No,” she says when asked if she and Calvin ever went on a date. Though she definitely felt “some form of attraction to him” and thinks he’s a genuinely good guy, they haven’t met up since the show because they live in different parts of the country. They do, however, routinely talk to each other. “Calvin and I are just really good friends. When I initially went on the show, I didn't go with any anticipation of having any type of [romantic] interest or anything like that. My biggest thing was to play the game.”

Though Kai clicked with Calvin right away, he was eliminated early on. As a result, he never saw Kai and his Circle bro, Nick, grow into the leaders of two opposing alliances. While Nick was quick to dub Kai his arch-nemesis, Kai admits that she didn’t see him the same way — at least not until much later. “When I [was an] Influencer, I didn't even feel the need to get rid of him. He just wasn’t a threat to me,” she explains.

The rapport she built up with Calvin factored into this, to a degree. “With the way [Calvin] felt about the Wolf Pack, I trusted that it would be OK,” she says. But she began to get a “gut feeling” that she couldn’t trust Nick, and went back and forth countless times about him throughout the season. “I didn't really know exactly what Nick was going to do because he saved me sometimes, and other times I felt like he was gonna throw me under the bus,” Kai says with a laugh.

Since the show, however, their relationship has taken a turn. “In real life, I love Nick; Nick is my boy,” she says, adding that they often jokingly text each other as “Big Nick Energy” and “Queen Kai.” The two actually wound up on the same flight home together after filming, and while “it could have been awkward,” they ended up “genuinely building a connection” before passing out on the plane. “He really is dope, and I am too, so I was like, OK, I think we can be friends in real life,” Kai says. “But in the game, I didn't trust Nick at all.”

The player Kai most connected with was James — who came in late and ultimately won The Circle. Despite losing to him, Kai says they’re closer than ever. “Oh my goodness, James and I are like siblings. We talk like every day,” she says. “He wasn't putting on [during the show] at all. He's a genuine soul, and the fact that he had my back made it easier in real life to connect.”

Though it appeared to be a tight race between Kai and Nick for first place, Kai says she’s not surprised that James won the $100,000 prize. “Number one, he's a great personality, hands down,” she says. He was also “fresh face” who was able to strike up a number of conversations and be “very relatable, very quickly.”

Kai, on the other hand, “had already built up so much jealousy from people,” she says, alluding to “the band” players like Nick, Isabella/Sophia, Ashley/Matthew, and Jackson/Rachel. “I could feel that people weren't trying to deal with me anymore because I was too much of a threat ... [James] played a great game for the time that he had, [but] I think he was also able to get that far because people didn't have that built up aggression for him like they had for me.”

Both Sophia and Matthew later apologized for icing out Kai, which led to her breaking down on the show. “Being in isolation on [The Circle], all you have is these new relationships,” she explains. “I had an expectation that Ashley and I were going to be thick as thieves like Charlie's Angels, with me, Ashley, and Ruksana.” So when alliances began to shift, Kai admits that it “hurt [her] feelings” and made her feel anxious. “Towards the end of the game I was just kind of pooped emotionally, and drained and I kind of felt like I was being attacked,” she says. “I don't like confrontation, and I don't like not being on the same page with people in real life.”

It was a taxing experience in some ways, but Kai doesn’t dwell on the negative. “I’m just extremely grateful for the opportunity,” she says of her time on The Circle. “I am a happy camper.”

More like this
Who Is Dorothy Wang Dating After The 'Bling Empire: New York'?
By Karen Fratti
Love Is Blind’s Natalie Claims Shayne Signed Up For 'Perfect Match' While They Were “Still Together”
By Brad Witter
'Love Is Blind: After The Altar' Season 3 Has A Release Date & It's Very Soon
By Grace Wehniainen
Brittany Snow Files For Divorce From Tyler Stanaland After 'Selling The OC' Drama
By Grace Wehniainen and Radhika Menon
Get Even More From Bustle — Sign Up For The Newsletter
From hair trends to relationship advice, our daily newsletter has everything you need to sound like a person who’s on TikTok, even if you aren’t.