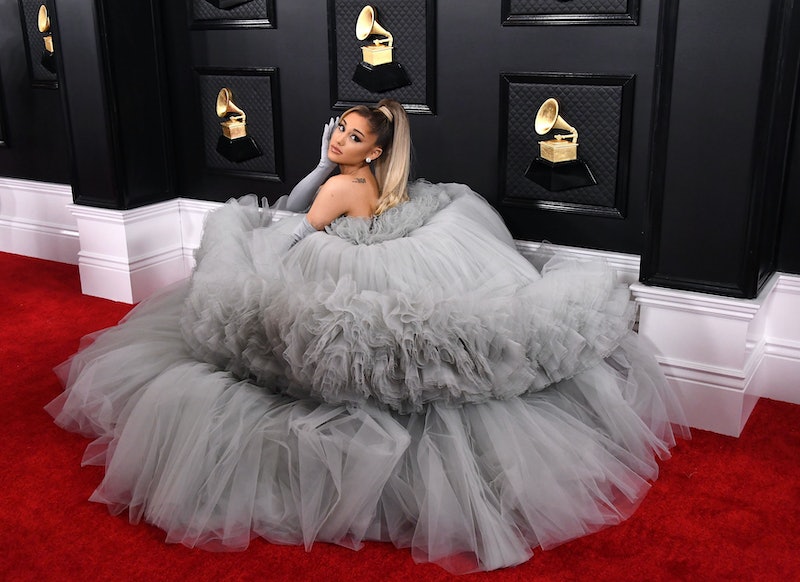 Ariana Grande isn’t even 30 years old (the pop star just turned 29 on June 26), but she has already left her mark on music history. She’s accomplished things no woman before her has managed, become one of the biggest successes on the Billboard charts and racked up a net worth that few artists have ever come close to. What’s even more impressive about the singer’s feats and the size of her bank account is the fact that she is only headed up from here.

2022 is slated to be massive for Grande, as she has projects in the works that will display all of her many talents. She is set to star in the film adaptation of Wicked, and she may help the soundtrack become a bestseller (again), perhaps even scoring some new hit singles from the timeless show’s score. Additionally, the film will be broken up into two parts, which could lead to a bigger pay day for the singer.

Fans might also be able to expect more pop music from the singer, as it’s already been more than a year since her last proper album Positions, and she isn’t known for waiting very long before giving the world new bops to enjoy. On top of all her acting and singing duties, Grande also just became an entrepreneur, so she is now certainly one of the busiest, and richest, people in the music business.

Grande might be a pint-sized singer, but her net worth is anything but tiny. In fact, she has made more money than most people can even dream of. But is it really all just thanks to her biggest hit singles, or is she bringing home the bacon with other activities?

Grande is primarily known as a singer, but that’s not where she got her start. In fact, by the time she released her first single, the oft-forgotten "Put Your Hearts Up," she had already appeared on Broadway and co-starred on a TV series on Nickelodeon. The young artist on the rise was headed for glory in the pop and R&B genres, but it would be years before companies would take a chance on the singer, putting her in the studio with producers and other artists who could give her a great start in the competitive industry.

It has now been more than a decade since Grande dropped her first proper single, and in those years, she has proved herself to be an incredibly talented and successful musician. Five of her albums have shot right to No. 1 on the Billboard 200, with just one of her full-lengths missing the mark (Dangerous Woman stalled at No. 2). Over on the Hot 100, Grande has scored half a dozen No. 1 smashes and an incredible 19 top 10 hits. Overall, 71 tunes fronted by the superstar or featuring her have made their way to the ranking, making her one of the most successful female artists in U.S. history.

In America alone, all of Grande’s most popular songs have collectively moved a certified 63.5 million copies between pure sales and streaming equivalents. That’s a massive figure for someone who has only been in the game for less than a full decade, and it puts her ahead of fellow powerhouses like Carrie Underwood, Cardi B and even Billie Eilish. Her albums have moved a total of nine million copies in the U.S., and she is surely about to hit 10 million equivalent units sometime soon, as fans keep streaming her discography non-stop. Globally, her career sales sum rises to at least 85 million records sold, and it’s also sure to improve constantly.

Anyone who has ever seen Grande perform live knows she was made to sing, as her vocals are truly top-notch. The pop star knows how to put on a fantastic show, and every new tour she embarks on tops the previous outing, attracting additional fans and earning millions more in ticket sales.

So far, Grande has launched four headlining tours, with three of them being truly global affairs. The star has now racked up at least a quarter of a billion dollars in ticket grosses, with more than half of that total coming from her most recent outing, the Sweetener World Tour, which racked up $146 million in ticket sales. As the main draw of her own treks (obviously), Grande likely earns several hundred thousand dollars per show. In fact, in 2019, Forbes estimated that her Sweetener venture was largely responsible for the $72 million she earned that year, ranking her as the highest-paid female musician in the world at the time.

One of Grande’s biggest monetary successes (and one of the most important milestones in her career) was when she headlined Coachella in 2019. The pop radio fixture took to the main stage two weekends in a row, earning a reported $8 million for her performances. She made history as the youngest person to sit atop the bill, and she was joined by celebrity friends Nicki Minaj, Khalid and even *NSYNC (most of the band, at least).

A quirky style icon of her own making, Grande has leveraged her fame and immensely popular social media channels into deals with some of the biggest brands in the clothing and accessories industries, perhaps earning millions in the process.

Grande first dipped her toes into the fashion world in 2015, when she was already a successful singer (but nowhere near as huge as she went on to become). The chart-topper worked with Coach on her own limited edition product, known as the Kiti Swagger bag. It was to be just the beginning of several partnerships that have increased her net worth, though by exactly how much is impossible to say.

A year later, she designed an entire line for British fashion company Lipsy. The first showing included 20 different items, and they all fit perfectly with the image Grande has created for herself. At the time the debut collection was announced, a second set of dresses and other coveted apparel pieces was already in the works.

In 2017, Grande signed a year-long deal with Reebok in what was the most lucrative venture into the clothing industry for the singer at the time. After that collaboration, she stepped up to the luxury market once again, becoming the face of Givenchy. The announcement was made on Instagram when the high-fashion brand posted a photo of the singer from the back, teasing that there was a new ambassador. It wasn’t much of a tease, though, as due to her signature ponytail, everybody knew what was coming. Not long after the exciting reveal, she starred in a stunning campaign featuring plenty of tailored suits and black-and-white images.

Back in 2016, Grande became the latest superstar to sign on to lead a Viva Glam campaign for MAC, the cosmetic giant’s annual charity line, the proceeds of which go to the firm’s own AIDS Fund. Musicians like Nicki Minaj, Fergie, Ricky Martin and even RuPaul have helped the initiative earn hundreds of millions in sales, with all that money going to help those in need. Grande surely didn’t pocket anything from her involvement, but it was a first step toward becoming a businesswoman.

In 2021, Grande revealed she had been working on developing her own beauty brand, and she quickly joined the likes of Rihanna and Lady Gaga with her signature spin on makeup. Titled R.E.M. Beauty (after her song “R.E.M” off her album Sweetener), the line features some truly enticing and interesting products, all priced for her younger fans to be able to afford them. The offerings include mascara for $15, lip gloss for $17 and highlighter for $22. Sales figures aren’t available, as the company is still very new, but chances are her followers rushed to buy, and just weeks after launching, several products were already sold out.

Like so many other power players in the entertainment space, Grande has also jumped into the fragrance industry, and while the celebrity perfume business has been declining in popularity from its peak many years ago, the “Break Free” star is bucking the trend and succeeding brilliantly. Since 2015, she has delivered more than half a dozen different scents—including Ari by Ariana Grande, Sweet Like Candy, Moonlight, Cloud, Thank U, Next, R.E.M. and God Is A Woman—as well as several offshoot products from some of those individual brands.

In just the first two years she was in the game, Grande’s sprays racked up an incredible $150 million in sales, and that turned out to be just the beginning. By mid-2021, that figure had exploded, and she approached three-quarters of a billion dollars in purchases. That’s one of the most impressive performances among singers in the fragrance field of all time, and she may have more items coming soon. What she makes per launch isn’t publicly available, but other superstars who have enjoyed similar success (such as Britney Spears) have earned tens of millions, and it’s entirely possible that Grande has done similarly.

In addition to partnering with companies like Coach, MAC, Reebok and more, Grande has lent her famous face and name to a number of other brands, with each deal she signs adding to her ever-increasing net worth. Throughout her years as a global superstar, the “Positions” chart-ruler has starred in commercials, launched products with or simply earned some serious dough by working with successful corporations like T-Mobile, Brookstone, WAT-AAH!, American Express, Starbucks, Nesquik, Old Navy, BetterHelp and even the video game Final Fantasy.

Some of these deals helped promote her own work or enhanced tours, while others were purely for the cash, though what these companies paid to be associated with the two-time Grammy winner was never revealed.

When she was still just a child, Grande made her Broadway debut in the musical 13, and she was probably paid well for someone so young, but ultimately, not very much money. The jump she has made from those paychecks to what she earns these days for her acting, singing and even hosting abilities is difficult to fathom.

After Broadway, Grande quickly jumped into the TV world, where she co-starred in the Nickelodeon program Victorious. She reportedly made just $9,000 per episode, and while that’s nothing compared to what many of the biggest names on the small screen take home for their work, it was probably a big deal for her at the time.

Grande largely stepped away from TV after that both Victorious and its spin-off Sam & Cat wrapped, and she didn’t return in a major way (aside from one-off appearances to perform or promote something and, of course, her turn on Scream Queens) until she signed on to be one of the four judges on The Voice. Joining Kelly Clarkson, John Legend, and Blake Shelton in the competition’s twenty-first season, Grande was compensated with between $20 million and $25 million for her time, making her the highest-paid star in the reality singing program’s history.

In November 2021, it was announced that Grande and fellow musical superstar Cynthia Erivo would team up to star in the film adaptation of Wicked, which was expected to begin filming in June 2022. What she’s being paid for that role hasn’t been made public, but seeing as it’s one of the most highly-anticipated releases in the film industry, her earnings could easily be into the eight digits. That revelation follows her return to acting in Don't Look Up alongside movie stars like Leonardo DiCaprio, Jennifer Lawrence, Cate Blanchett and Meryl Streep.

What Is Ariana Grande’s Net Worth?

As of the end of 2022, Grande’s net worth is set at $200 million, according to Celebrity Net Worth. The aggregator recently increased the estimate by more than 10%, as earlier in 2021 she was reportedly worth $180 million.

More like this
How Lady Gaga & Adele Are Closer To The EGOT All Of A Sudden
By Jake Viswanath
Lady Gaga Will Star In 'Joker: Folie À Deux' With Joaquin Phoenix
By Jake Viswanath
Twitter Is At Odds Over Taylor Swift’s Possible ‘All Too Well’ Oscar Run
By Brad Witter
Christina Perri Had No Idea Her 'Twilight' Song Is On YouTube's Top 100 Chart
By Radhika Menon
Get Even More From Bustle — Sign Up For The Newsletter