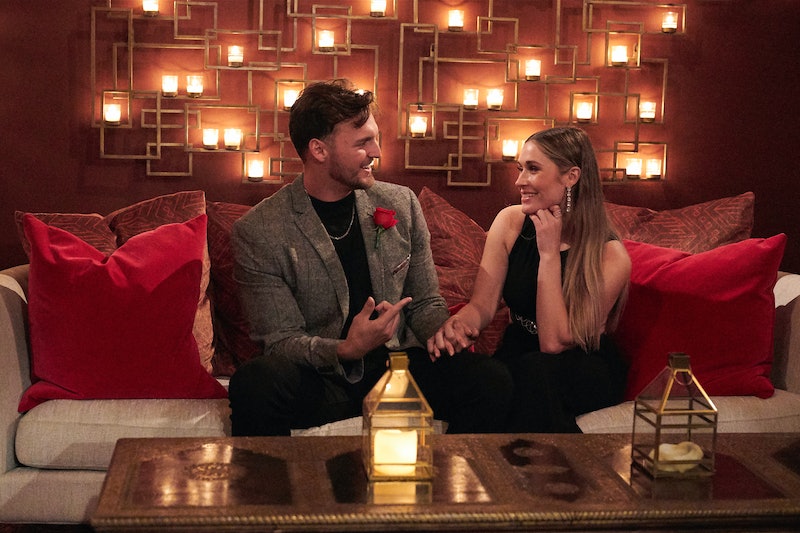 Logan Palmer is opening up about his Bachelorette journey. After exiting the show on Week 6 of The Bachelorette, the videographer took to Instagram to talk about his experience, and thanked Gabby Windey and Rachel Recchia for including him in their journey. He famously brought two baby chicks with him for his limo arrival of Season 19. Logan ultimately left the show after being diagnosed with COVID, which appeared to end any chance for him and Gabby to end up together.

“This year I decided to go on a reality dating show,” the San Diego native began his post, shared in the late hours of Aug. 15. “I figured it was something new, it was an adventure. But I came out the other side with much more than an experience. I came out of this with real feelings, strong emotions, lessons learned, and a lot to be grateful for. Two very strong women gave me the opportunity to learn about myself and about relationships. Thank you for your class, your patience, and your time.”

He also addressed Rachel and Gabby individually in his Instagram caption, apologizing for complicating things for Rachel and thanking Gabby for giving him an opportunity. “Rachel, I’m sorry that I added more difficulty to an already challenging journey. That was never my intention, but it was inspiring how strong you were through it all,” he added. “Gabby, thank you for taking a chance on me. The stars didn’t quite align with you and I, but I am a better person for knowing you. You both have shaped me into a better man and are so deserving of happiness. I know you will find it with the men you have remaining.”

Early on, he was involved in a love triangle with the contestants when Rachel and Gabby both had feelings for him, but Gabby decided to back off so Rachel could explore the connection. He famously switched sides during Week 5’s episode, after accepting several roses from Rachel while still having strong feelings for Gabby. “It’s been hard for me moving forward, to kind of forget about that connection [with Gabby] ... I’m going to have to step away from pursuing things with you,” he explained to Rachel. His actions shocked Bachelorette fans.

One thing that was missing from his Instagram post was addressing why he went home on the Aug. 15 episode. Logan tested positive for COVID, thus having to exit the show prematurely. Fans were a bit confused by his lack of mentioning it in the post. Several users questioned how he was the only one to test positive for it on the show.

Some fans were also confused about how Jesse failed to mention the diagnosis on camera, referring to it as “a situation.”

Logan also opened up about the impact the dating show will have on him, saying watching himself on the show gave him perspective. “I will always be someone who will steer with their heart whether it is popular or not. But in the future, I want to lead with intention and pursue with purpose. I am ready to bring those lessons back into to my life,” he explained.

He then pivoted into discussing his mental health struggles, hinting toward his exit possibly being something more than COVID. “I have struggled with my mental health since i was 12 years old, and this process was more difficult in that arena than I ever thought possible. Destructive thoughts and constant doubt are hurdles that I think everyone relates to at some point but not everyone talks about. It wasn’t all roses, but I am grateful for it all,” he concluded the post, which featured black-and-white photos of him and other Bachelorette contestants from Season 19.

Ultimately, fans wanted the best for him moving forward. “I hate to speculate… but Logan’s last paragraph almost confirms for me that it was some deeper than COVID. Despite him being wishy washy, I hope he is okay,” one person tweeted.