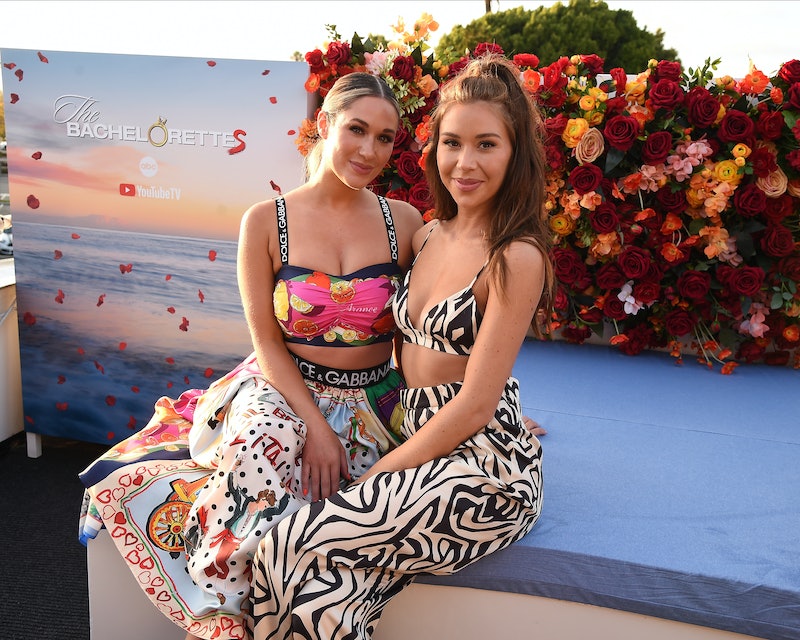 Many a meme spoofed Jesse Palmer’s hosting style during the July 11 Bachelorette premiere — namely, his laissez-faire approach to the rules (or lack thereof) for the season. It’s the first to feature two Bachelorettes for the entire journey. “How’s that gonna work?,” he asks. “Which woman gets to date which guy? Who chooses? And then what happens if both women fall in love with the same man? Honestly, I’m not really sure.”

Wait — does Jesse *really* not know what’s going on?, Twitter wondered during key moments like the canceled rose ceremony. But as Gabby Windey and Rachel Recchia tell Bustle, their decision to flip the script during the season premiere was as on-the-fly as it seemed. (And, sure, filming during the wee hours of the morning would make everyone more amenable to cutting things short.) “Jesse was like, ‘Whatever you guys want to do, do. Like, it’s 5 a.m.,’” Gabby jokes. “But no, they were really open to all of our suggestions and kind of what felt right to us in the moment. ... They were really taking note of our input.”

Despite the chaos of Clayton Echard’s Bachelor season, neither Bachelorette seems particularly burned by the events of that tear-filled finale. Gabby says this season has more of a “new love feel” than anything else.

“When you date when you’re younger, you aren’t jaded, you’re so vulnerable,” she explains. “It feels so good to be in love, you trust the other person because you’ve never been heartbroken before. And during our journey, we had a lot with that because everything is so new and exciting. You’re going on these amazing dates. And you really do just feel like kids. It’s the best feeling in the world.”

It’s actually not the only way The Bachelorette is a lot like young (and sometimes awkward) love. Ahead, see the hilarious way Rachel’s first kiss prepared her for the show — plus, Grandpa John’s advice to Gabby ahead of the season.

What surprising things did you learn about each other while filming?

Rachel: We’re constantly learning and getting to know each other better. I loved being able to watch Gabby grow, and I’m excited for people to see that. They only saw one side of us last time. She really came into herself so much and figured out what she wanted. I was proud of her the whole time.

Gabby: That was rewarding. We got to know each other’s inner workings the first time around because we do talk about things so openly, and you are always in your feels on this show. We bonded with that. And I watched you grow then, and at [After the Final Rose], and now on The Bachelorette, so it is a big, pieced-together journey that isn’t gonna stop now with our friendship.

Now that you’ve been through it, would you recommend future seasons have dual Bachelor/ettes?

Gabby: It just depends on the people, if they have a supportive and strong enough friendship. Rachel and I always put each other first from the beginning. We set ourselves up for success. If people aren’t as close in a friendship, that’s when things can get messy. But then that’s drama, so I don’t know.

Rachel: It wouldn’t be the same format if they don’t have a relationship like we have. I would love to see it if they ever found two leads that are in a similar situation as we were.

Gabby, everyone loved meeting your grandpa on The Bachelor. Did he give you any advice for being the Bachelorette with Rachel?

Gabby: My grandpa is so supportive and honestly such a rock that I don’t think he would ever truly give real advice — just, ‘Follow your heart and be happy. If you’re happy, I trust you and I’m gonna be happy for you.’ But knowing that he has my back no matter what is the best feeling from a family member.

In one of the promos for the rest of the season, you say this experience is like two teenagers in love. Does either of you have awkward high school dating stories?

Rachel: I wasn’t a big dater in high school. I didn’t start dating really until college.

Gabby: My first kiss was on a trampoline.

Rachel: Oh my god, mine was in my driveway. My mom was looking out the window!

And now, millions of people are watching.