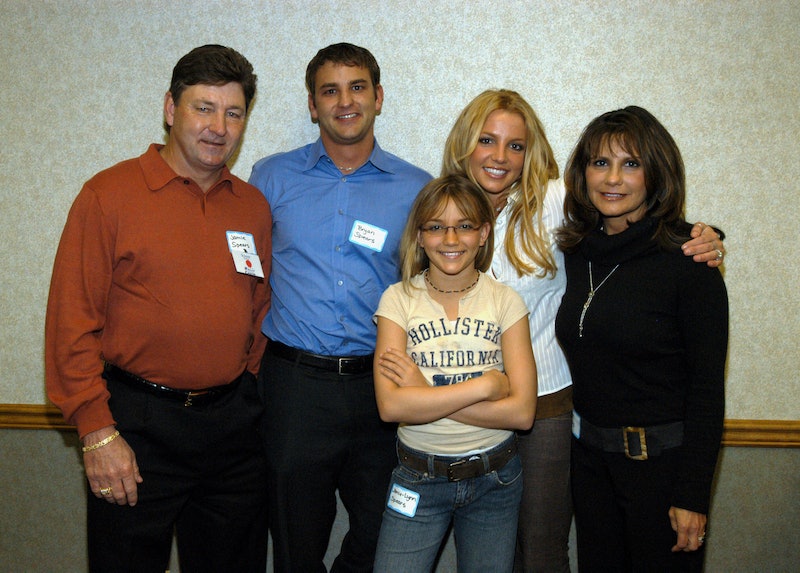 During Britney Spears’ June 23 court conservatorship hearing, the singer shared a revealing account of her life under the system in which her father, Jamie Spears, exercises control over every area of her life. “Not only did my family not do a goddamn thing,” she said, per the court transcript via Variety, “my dad was all for it. Anything that happened to me had to be approved by my dad ... he loved the control to hurt his own daughter 100,000 percent. He loved it.” As part of her statement, Spears also revealed some of the harrowing details of her conservatorship — including the fact that she wears an IUD her team “won’t let” her remove to prevent her from having another child — and said she is “traumatized” and “depressed,” crying every day about her situation. Spears would like to end her conservatorship “without having to be evaluated,” she added.

The statement marked a rare firsthand addition to the #FreeBritney discourse, and Spears is ready to make these details known. She stated, “And I would honestly like to sue my family, to be totally honest with you. I also would like to be able to share my story with the world and what they did to me, instead of it being a hush-hush secret to benefit all of them.”

On July 14, Spears spoke in another conservatorship hearing in which she requested and received approval for new legal counsel. As reported by CNN and NBC News, she continued her candid statements and said she was made to feel “crazy,” adding that those who were managing her conservatorship “were trying to kill me.” Regarding her father, Spears detailed that she is “extremely scared” of Jamie and wants “to get rid of my dad and charge him with conservatorship abuse.”

Naturally, Spears’ fans and fellow celebrities alike had much to say in support of the singer. Her own circle chimed in, too. Though her family’s comments were brief, some provided a glimpse at the dynamic between Spears and the people closest to her case, who the singer said have “lived off my conservatorship for 13 years.” Here is everything Spears’ family and loved ones have said about her statement.

What Did Jamie Lynn Spears Say About Britney’s Conservatorship?

Spears’ younger sister, Jamie Lynn, shared videos to her Instagram story on the day of the June 23 hearing. In them, she spent time with her daughter and a woman who appears to be Lynne Spears, Britney and Jamie Lynn’s mother. Though Jamie Lynn didn’t address the conservatorship directly, she did turn off comments on her recent posts after users criticized her role in Spears’ case.

On June 28, days after Spears’ testimony, Jamie Lynn spoke out in an emotional video posted on her Instagram Story, saying that she didn’t want to comment until Britney spoke out herself and making it clear she only has her sister’s best interests at heart. "I think it's extremely clear that since the day I was born that I've only loved, adored, and supported my sister. This is my freakin' big sister before any of this bullsh*t,” she explained. “I'm so proud of her for using her voice. I am so proud of her for requesting new counsel.”

Jamie Lynn previously alluded to her sister’s conservatorship in 2020 amid the #FreeBritney movement. “If you deal with mental illness or care for someone dealing with mental illness,” she wrote last July, “then you know how important it is to respect the situation with privacy for the person, and the family trying to protect their loved ones, no matter how it appears to the public.”

In August 2020, Jamie Lynn was named as the trustee of Spears’ trust and is now positioned to inherit the totality of Spears’ fortune upon her death, “including all accused and undistributed and unrealized income.” According to Us Weekly, the change was put into motion in 2018, approved by Spears’ then co-conservators (her father and Andrew Wallet), and made public last year after Jamie Lynn signed the document. However, in her video, she dismissed rumors that she profited from Spears’ career or conservatorship. “I've worked since I was 9 years old; I've paid my own bills since I was 10 years old,” she said. “Not that I owe the public anything because my sister knows I love and support her. That's the only person I owe anything to.”

Following her comments on the conservatorship, Jamie Lynn allegedly received hateful comments, including death threats, directed towards her and her family on social media. “Hi, I respect that everyone has the right to express themselves,” she wrote on Instagram, per People, “but can we please stop with the death threats, especially the death threats to children.”

Despite the tension between Spears’ fans and Jamie Lynn, she appears to be on good terms with her older sister. On July 11, Jamie Lynn took to Instagram to post a photo of toys she claims Spears sent to her kids on her story. “Nothing sweeter than coming home to a box full of goodies for my girls from their auntie,” she captioned the image, according to People, tagging Spears.

After Spears was granted the ability to choose her own legal counsel on July 14, Jamie Lynn shared an optimistic message on her Instagram story — an image of a quote attributed to Christopher Reeve, reading, “Once you choose hope, anything’s possible.” The next day, she shared a picture of a prayer reading, “Dear Lord, Can we end this bullsh*t once and for all.”

What Did Britney’s Boyfriend Say About Her Hearing?

Spears’ boyfriend, Sam Asghari, was also active on Instagram on the day of the singer’s June hearing — but his message was much clearer, opting to sport a “Free Britney” T-shirt on his Story. The post also featured a lion emoji, and he posted a photo of a lion on his story later, seeming to hint at Spears’ powerful statement. “Your lioness did amazing today,” one user commented.

Asghari was referenced during Spears’ statement. “I’d like for my boyfriend to be able to drive me in his car ... I would like to progressively move forward, and I want to have the real deal,” she said. “I want to be able to get married and have a baby.”

On the day of the July 14 court session, Ashgari supported Spears again, posting a black-and-white photo of a lioness on his Instagram feed, “Free Britney” on his Instagram Stories, and “Internet is about to explode #freebritney” in the comments of Spears’ celebratory post-hearing video.

What Did Britney’s Father Say In Response To Her Statement?

According to The Hollywood Reporter, Jamie Spears had only a brief comment to share after a recess and his daughter’s June 23 statement. Via a lawyer, Jamie expressed that he was “sorry to hear she’s suffering and in so much pain” and that he “misses his daughter very much.”

However, on June 30, a week after the hearing, Jamie requested an investigation into Spears’ testimony, specifically regarding the abuse claims against him. As reported by The New York Times, Jamie’s lawyers asked for an evidentiary hearing in new court documents, writing that “either the allegations will be shown to be true, in which case corrective action must be taken, or they will be shown to be false, in which case the conservatorship can continue its course.” Spears’ father also addressed his daughter’s claims by questioning her current personal conservator Jodi Montgomery, who has been “fully in charge of Ms. Spears’ day-to-day personal care and medical treatment” since September 2019, according to his lawyers.

In 2020, Jamie told The New York Post that #FreeBritney advocates were “conspiracy theorists [who] don’t know anything,” calling the whole movement a “joke.”

How Did Britney’s Mother Respond To Her Hearing?

As reported by Us Weekly, Lynne Spears’ attorney Gladstone Jones said she was a “very concerned mother” following her daughter’s June statement. And according to a Vulture report, Jones relayed Lynne’s sentiments via a statement that read: “Today is the day while the world watches while we listen to Ms. Spears, that we put in place a plan. That is her mother's request, that we not leave the court without having a plan.”

In a July 3 report by The New Yorker, Lynne expressed that she had “mixed feelings” about Spears’ situation. According to reporters Ronan Farrow and Jia Tolentino, Lynne “spoke in a whisper” during their interview, declined to answer “detailed questions” about the case, and explained that she might have to “hang up abruptly” if a family member walked in on the call, apologizing in advance. “I don't know what to think,” she said. “It's a lot of pain, a lot of worry.”

On July 5, following the resignation of Spears’ court-appointed lawyer Samuel D. Ingham III, Lynne filed a petition to Judge Brenda Penny to allow her daughter to choose her own legal team, which she expressed interest in during her June 23 testimony. “Her capacity is certainly different today than it was in 2008, and Conservatee should no longer be held to the 2008 standard, whereby she was found to ‘not have the capacity to retain counsel,’” read the petition, per Deadline. In the document, Lynne also urged the judge to “to listen to the wishes of her daughter, and as a first step,” let her choose her lawyers.

“It is self-evident that before the Court addresses, for example, the termination of the conservatorship, Conservatee must be allowed to consult with counsel of her choosing,” continued the petition. “Clearly, Conservatee needs private counsel to advise her as to her basic rights in this conservatorship.”

The New York Times reported on July 11 that Spears was in talks to hire well-known entertainment lawyer Matthew S. Rosengart, and his appointment was approved by Judge Penny on July 14.

On Tuesday, June 29, Spears’ ex-husband Kevin Federline, who is the father of her two sons Sean Preston and Jayden James, responded to her hearing through his attorney Mark Vincent Kaplan, saying that he has nothing but well wishes for his ex-wife. “The best thing would be for their mom to be healthy and happy,” Kaplan told People in a statement. “And if either of those things aren't true, it doesn't provide for the best setting for custody to be exercised. [Kevin] certainly respects Britney and only hopes the best for her because when the best for her is achieved, it's the best for their kids.”

In regards to the conservatorship, Federline would support Spears if she formally petitioned to end the arrangement, as she indicated she would do. “Britney has not been served well by the conservatorship, and it's not consistent with what she wants,” Kaplan added. “I think that she should be able to challenge that. And if it's what's best for her, Kevin supports it.”

Have Britney’s Kids Responded To Her Conservatorship Situation?

Though Spears’ two sons generally stay out of the public sphere, her son Jayden did voice support for his mom (and criticism of his grandfather) during an Instagram Live in 2020, as reported by Refinery29. Today, that account is private. Her children have not responded to her court statements.