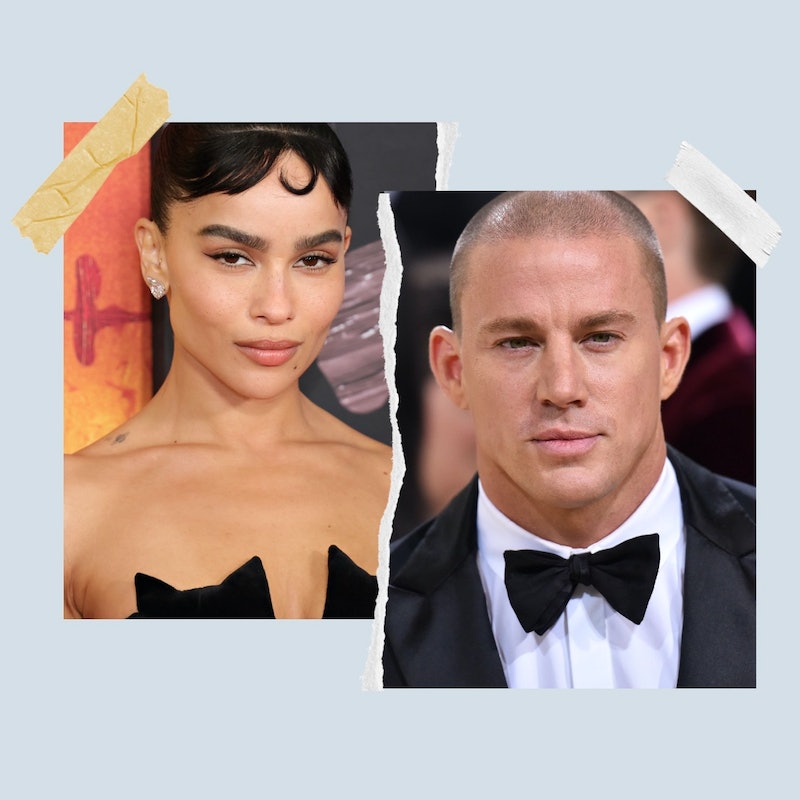 The Batman star Zoë Kravitz and her boyfriend Channing Tatum have become one of the hottest and most-discussed couples in Hollywood, but their relationship timeline is surprisingly short. In fact, it appears that before 2021, it’s highly likely that they had never met even though they were part of the same voice cast for The LEGO Batman Movie in 2017.

Now, the two superstars are working together on Pussy Island with Kravitz making her directorial debut and Tatum starring in it. Anticipation for the project is high, especially because Kravitz and Tatum are dating. Plenty of eyes are also on Kravitz this March as she stars as Catwoman in The Batman and walks the red carpet to promote the film.

One of the buzziest moments in their relationship involved Crocs. “When someone can just come out and tell me I should not be wearing Crocs, and is so adamant about it, she completely convinced me and I never wear Crocs anymore,” Tatum told Deadline in 2021. “I get it, but I totally loved Crocs for a hot second, and in one hang she was like, you can’t ever do that again. And I said, ‘OK, fine.’” Without Crocs, Tatum added, “I feel cooler, and her point of view on me and Crocs was legit. She had a good argument. The one thing I can pull off, is listening.”

Here’s a timeline of how Kravitz and Tatum came to know one another and an outline of the rapid progression from strangers to lovers.

Kravitz and Tatum both lent their vocal talents to The LEGO Batman Movie — Kravitz portrayed Catwoman while Tatum took on the role of Superman. While they were credited as cast members, it appears that they never got a chance to meet because they recorded their parts separately.

After nine years of marriage, Tatum and his then-wife Jenna Dewan announced that they had decided to separate in April 2018. Dewan filed for divorce in October of that year, and they were legally no longer husband and wife by November 2019. In between breaking things off with Dewan and falling for Kravitz, Tatum also had an on-again-off-again relationship with singer Jessie J, but that didn’t work out either.

In an even shorter span of time, Kravitz married her beau, actor Karl Glusman, in Paris in June 2019. Less than two years later, the married couple filed for a divorce in December 2020 and the separation became final in August 2021.

After the world learned of Kravitz’s divorce, countless media outlets and fans of the actor began suggesting that she was romantically connected to Tatum. While the rumor was certainly a juicy one, a source close to either one of them (or perhaps both) tried to make the story go away, telling People, “They’re working together on an upcoming project and it’s not true that they’re dating.” That may have been correct at the time, but something more was on the way.

After months of speculation that Kravitz and Tatum were set to work with one another on a project, the details were finally released. Deadline announced that Kravitz was slated to direct Tatum in Pussy Island, a feature that she also co-wrote with E.T. Feigenbaum. In the piece, the future director spoke about how she wanted no one else for the role. “Chan was my first choice, the one I thought of when I wrote this character,” Kravitz said. “I just knew from Magic Mike and his live shows, I got the sense he’s a true feminist and I wanted to collaborate with someone who was clearly interested in exploring this subject matter.” Tatum added: “When Zoë called me about this, I was shocked. I didn’t know her. I’d watched her in movies, knew she produced High Fidelity and had seen that, but I didn’t know she was creating on a level like this.”

After Kravitz’s famous father Lenny Kravitz posted a thirst trap on Instagram that displayed his picture-perfect abs, the fun began. His daughter reportedly commented on the snap (though her words seem to have been deleted), “You auditioning for MM3?,” tagging Tatum as well. He then replied, “Oh sh*t!! Doing the lords work i see!! Will be calling you shortly to get into your schedule my friend. Hehehe.” It was a simple and fun moment, but fans assumed there was more to it.

Kravitz and Tatum were photographed in the streets of New York City hanging out and having a great time. Page Six published the images of Tatum riding a black BMX bike, with his female companion hopping on for a joy ride.

August 2021: Iced Coffee In The Summer

Less than a week after their bike ride, People shared pics of the two out and about again, this time drinking iced coffees and laughing. Tatum had a different bicycle with him, as apparently that’s his preferred way to get around the city.

For months, fans of both Tatum and Kravitz guessed that the two talents were dating, but nothing had been confirmed. As the evidence continued to add up, Tatum threw gasoline on the fire and seemingly told their admirers all they needed to know when he followed several Instagram accounts dedicated to providing updates on Kravitz. According to Us Weekly, the Magic Mike star followed profiles like @zkluv, @zoekravitzinc, @zoekravitzsource, and @kravitzupdate.

On the same day fans noticed that Tatum was very interested in what social media was saying about Kravitz, a source finally confirmed to Entertainment Tonight what so many had already expected to eventually hear. “Zoë and Channing are dating. It started out as a friendship and eventually turned to be more,” the unnamed person stated. “The duo was recently spotted at a restaurant in New York City being very affectionate.”

Both Kravitz and Tatum attended the 2021 Met Gala, but they walked the red carpet separately. A photographer who was still at the event long after the carpet ended managed to sneak a picture of the actors, who appeared to be leaving together.

For months, Kravitz and Tatum had been seen by fans and paparazzi all around New York City, but the images didn’t show anything specifically romantic. For a while, it seemed they could deny that they were anything more than friends, but eventually, that time passed. PEOPLE shared photos of the actors holding hands and looking very cuddly. The same magazine published quotes from a source confirming their love. “They are more relaxed lately,” that person said. “They don’t seem to care about hiding their relationship anymore. It’s obvious that they are very happy.”

Is there anything that screams “couple” more than choosing costumes together? Tatum shared several pictures in his Instagram stories of their outfits, both inspired by the ’70s film Taxi Driver. Tatum rocked a faux hawk and a fake-bloodied jumpsuit, just as Robert De Niro did in the movie, while Kravitz channeled a young Jodi Foster.

PEOPLE quoted a source who said that kids were getting involved. Tatum’s daughter Everly, who he shares with ex-wife Dewan, got to meet Kravitz after the relationship seemed to be getting a bit more serious. The source claimed that it “only seems natural that she is getting to know Everly.”

While promoting his film The Lost City, Tatum spoke to Variety for a far-reaching feature all about his return to acting. The piece asserted that he was indeed dating Kravitz, and Tatum spoke openly about how they worked together as actor and director and the advice he gave her. Apparently, he suggested that she not act in Pussy Island, which she was busy directing. “I was like, ‘You’ll need double the days,’” Tatum said. “She’s a perfectionist in the best possible way.”

As Tatum was pushing his movie The Lost City and finding ways to compliment Kravitz for her work as a director, she was busy promoting both The Batman and Kimi. In an interview with Elle, Kravitz admitted that while she had never met her future Pussy Island leading man before, she felt he was the right actor for the job, even going so far as to say she felt he was “Brave enough” to do so. “Looking at his work and hearing him speak about Magic Mike and the live show, I’m like, I think he’s a feminist. You need to be so far from who this is, where it’s not scary. And I don’t think we’ve ever seen him play someone dark,” she said. “I’m excited to see him do that.”

Later on in the piece, Kravitz addressed paparazzi photos that show her holding hands with Tatum by keeping things coy and saying only, “I’m happy.”