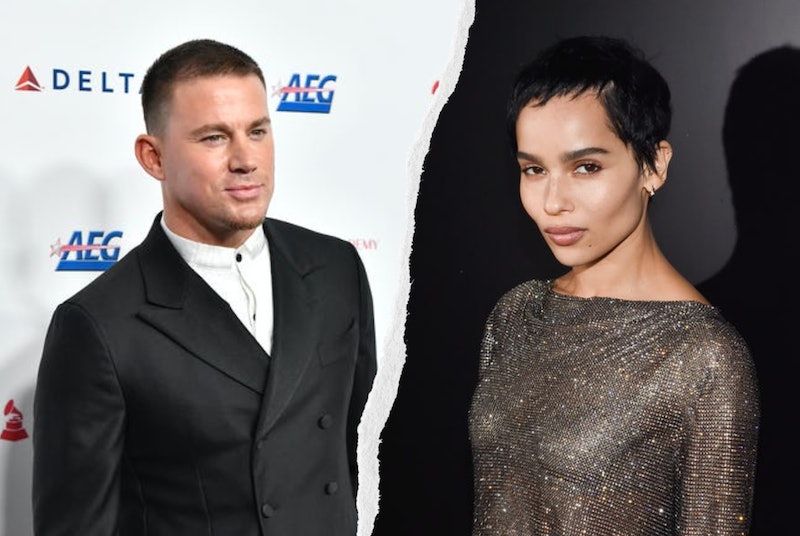 Zoë Kravitz is set to make her directorial debut with a forthcoming thriller titled Pussy Island, which she also co-wrote and will co-produce, per Deadline. The film will mark her second time taking on the role of producer following Hulu’s High Fidelity, which she also starred in. It’ll add to her already-busy schedule, as she’s set to play Catwoman in The Batman opposite Robert Pattinson and star in Steven Soderbergh’s upcoming COVID thriller KIMI, both of which are currently in production. Channing Tatum has been tapped to star in Pussy Island, which will enter the upcoming Cannes Market, where CAA Media will handle domestic rights and FilmNation will manage international rights.

Speaking to Deadline, Kravitz said her experience writing and producing High Fidelity was “an incredible education in storytelling.” She continued: “This is my first feature, and it’s taken many years to get to this point, and I’m very excited to step into this new phase. There’s absolutely a thriller element to the film, but it has comedy, drama, and real heart. At heart, though, it’s a genre thriller.” Here’s everything you need to know about Kravitz’s Pussy Island.

Revealed exclusively to Deadline on June 16, Pussy Island follows a young, clever woman named Frida who works as a cocktail waitress in Los Angeles and is determined to link up with philanthropist and tech mogul Slater King, played by Tatum. Frida masterfully finds her way into King’s personal life and scores an invite to an intimate gathering on his private island, eager for a wild ride of a journey. But as she experiences the gorgeous setting, beautiful people, and champagne-filled parties, Frida begins to feel as though “there’s more to this island than meets the eye.” While she can’t figure out exactly what’s going on, she knows it’s terrifying.

As noted by Deadline, Kravitz has been working towards a foray into directing for a few years and co-wrote “a script that captures the zeitgeist clash of power and gender dynamics in a gender construct.” Kravitz detailed to the publication that “the [film’s] title means lots of things” and revealed that she began writing its script alongside E.T. Feigenbaum (High Fidelity) in 2017. “As a woman in general, and a woman in this industry, I’ve experienced some pretty wild behavior from the opposite sex,” she said. “The title was kind of a joke at first, this place where people would go, bring women, party, and hang out. The story evolved into something else, but the title wound up having multiple meanings. And it alludes to this time and place we claim to not be in anymore, in terms of sexual politics.”

“People are evolving and changing, but there is still a bad taste in a lot of people’s mouths from past behavior,” Kravitz continued. “It’s a nod to that, but it’s also playful and a really playful film in a lot of ways. I like that the title leads with that and has some heavy meaning beneath it.”

Tatum is currently the only actor announced to appear in the film, and Kravitz had her eyes on him for the role for quite some time. The pair even developed the script and characters together, with Kravitz noting that she set out to write the female lead for herself but opted to give it to another actress so she can focus on its direction. “Chan was my first choice, the one I thought of when I wrote this character,” she told Deadline. “I just knew from Magic Mike and his live shows. I got the sense he’s a true feminist, and I wanted to collaborate with someone who was clearly interested in exploring this subject matter.”

The actor reportedly felt challenged by the prospect of working on a story rooted in gender politics. “It’s terrifying to talk about anything, when you start putting your toes over the line, and talking about men and women today, as things are starting to bubble to the surface and everybody is starting to have accountability,” Tatum told Deadline, noting that he didn’t know Kravitz personally and was “shocked” to receive her call, having watched her in movies and High Fidelity. “But I didn’t know she was creating on a level like this, where she wanted to direct.”

Confused at her interest in him for the role, he stepped into it anyway. “It was scary and liberating... It became less about men and women and more of a human thing that will open people’s eyes, rather than us drawing lines in the sand — the you’re a man, I’m a woman, it’s us against you thing,” he continued. “This goes deeper in a direction I’m fascinated by, and I’m interested in seeing how people receive this and break it down in their own lives. And what they think the movie means and how would they have made decisions.”

Tatum described his character, Slater, as “a wild character, an extremely committed version — psychotic possibly — but an extreme version of myself.” Noting that he’s “very interested” to witness the physical, mental, spiritual, and energetic capabilities of humans in the film, he continued: “[Slater] wants to know what people are capable of, what they want, and what they are capable of when they want something. And how far are you willing to push yourself to get the thing that you want. For me, that supersedes gender, race or religion, creed. That’s wildly fascinating to me.”

Per Deadline, Pussy Island will begin production “early next year on an undisclosed tropical island.” Details regarding the film’s release and whether it’ll hit theaters, a streaming service, or both have yet to be revealed.

This post will be updated with the trailer, release date, and additional cast details as more information on Pussy Island becomes available.