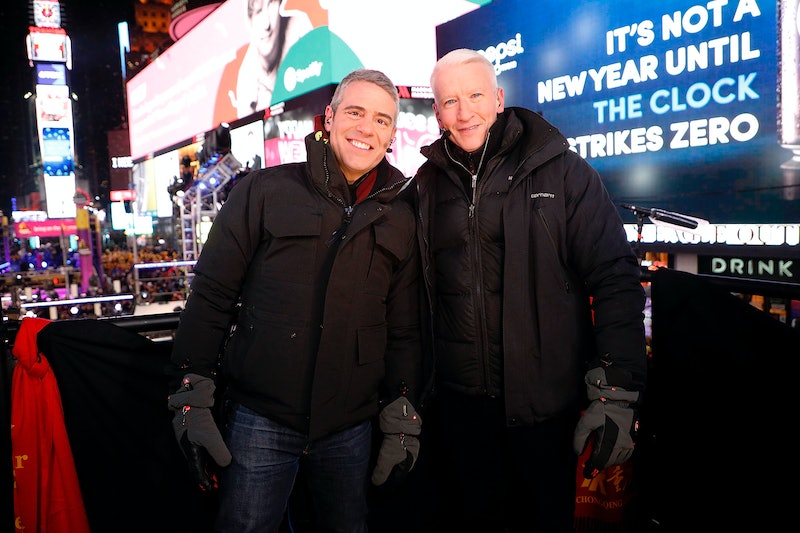 This year, CNN is holding a liquor ban of sorts for on-air personalities. Per a Variety report, CNN CEO Chris Licht told employees during a town hall that drinking on-air damages the “respectability” of CNN personnel. While, per Newsweek, Cohen initially said he plans to keep drinking and “party harder,” it appears as though he and Cooper will be keeping things sober this year. On Dec. 29, Cohen told Page Six about the new plan: “We aren’t drinking, but we’re going to have a BLAST.”

Since this year’s show is going sober, here’s a look back at six memorable drunken moments from CNN’s New Year’s Eve Live shows through the years, in no particular order.

When Anderson Cooper Swore On Camera

On Dec. 31, 2019, Cooper got nostalgic recounting an anecdote about his mother, Gloria Vanderbilt, who passed away earlier that year. While on tour promoting their book, they had to do an interview with Cohen. The then-93-year-old asked Cooper something he was initially hesitant to blurt out on camera. But when Cohen tried to tell the story himself and censor it, Cohen interrupted him. “She turns to me out of the blue and goes, ‘He's not going to ask me who has the biggest c*ck in Hollywood, is he?’” Cooper said. Twitter was living for the uncensored moment.

When Cooper Had His First Jäger Shot

Cooper’s vivid expressions while throwing back have always been priceless, painting a clear picture of how much he dislikes shots. While ringing in 2020, the world watched as Cooper tasted his first shot of Jägermeister — and how much he hated it.

“What is that? Who would drink this?” Cooper asked Cohen after he explained what they just had. To which Cohen replied, “College students and Jimmy [Fallon].” Cooper proceeded to shake his head and appeared to wipe his tongue with tissue paper, before gulping down a bottle of water. Relatable.

It’s not just the New York-based hosts who have a grand ol’ time. In 2016, while covering New Year’s Eve in New Orleans, CNN anchor Lemon decided to do something controversial on live TV: get his ear pierced.

The CNN Tonight host first asked bystanders if he should get a tattoo or a piercing and then tweeted about the impending show. After one too many tequila shots, the CNN mainstay delivered when he headed to a piercing parlor and got his ear pierced on live TV beside co-host Brooke Baldwin. She held his hand as a needle poked his ear and Lemon screamed in pain.

When Lemon Kissed His Boyfriend

It’s not always piercings (or tattoos) for Lemon. During the same ear-piercing telecast, Lemon got candid about what he wanted for 2017 — and it included romance. “I need a little bit more balance in work/life,” he said, adding, “I may be open to a relationship this year.” It happened.

Exactly a year later, back at the same bar in New Orleans, Lemon publicly announced during the broadcast that he “found love.” And then proceeded to kiss his boyfriend, Tim Malone, on camera. Before the sweet moment, Lemon (who happened to be in a top hat) could be heard saying, “I love you, baby.” The pair is currently engaged.

When Lemon Played With Puppies

Lemon had already gained his reputation as a fun broadcaster on New Year’s and he alluded to that on air. While reporting live on New Year’s Eve 2018, Lemon told Baldwin, “Everyone wants to see Don Lemon get litty lit!” And he did.

At one point during the broadcast, his version of getting lit involved cuddling puppies. Too cute.

Leading up to 2020, Cooper and Cohen were especially riveted by correspondent Richard Quest’s costume (who has been known to turn it up). Reporting from Broadway, Quest decided to dress as Rum Tum Tugger, a character from the musical Cats. After guessing Quest’s costume reference correctly, Cooper got visibly excited. He started giggling and acting cat-like: licking his “paws,” “grooming” himself, and then proceeding to do the same to Cohen. It was a purr-fect (albeit slightly confusing) on-air moment.

Here’s to hoping this year brings more silly antics on-air — turnt or not.

More like this
Hilary Duff Is “Optimistic” About A 'Lizzie McGuire' Reboot
By Alyssa Lapid
At 28, Debra Jo Rupp Was Living A Much Different '70s Show
By Grace Wehniainen
'That '90s Show' Star Callie Haverda Got Advice From Mila Kunis & Ashton Kutcher
By Brad Witter
The 8 Best Aidan Shaw Moments On 'Sex And The City'
By Grace Wehniainen
Get Even More From Bustle — Sign Up For The Newsletter
From hair trends to relationship advice, our daily newsletter has everything you need to sound like a person who’s on TikTok, even if you aren’t.