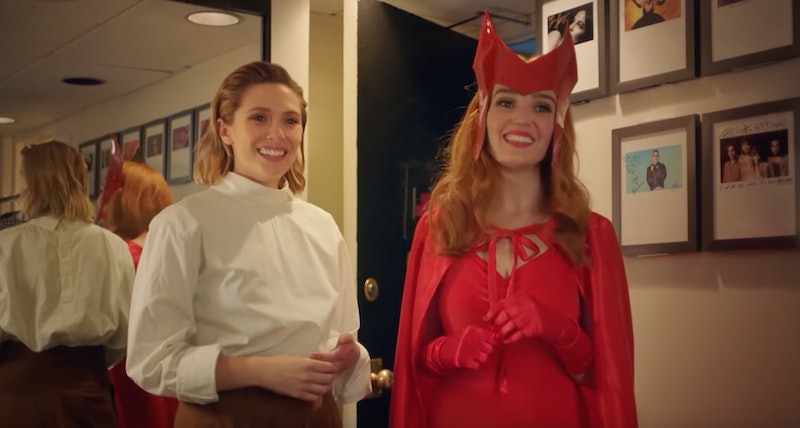 If you’re a Wanda Maximoff stan, there’s a pretty good chance you didn’t waste any time seeing Doctor Strange in the Multiverse of Madness in theaters. But even if you haven’t seen the highly anticipated Marvel movie yet (or perhaps you simply want an extra serving of Scarlet Witch content), you’re in luck: Elizabeth Olsen and her on-screen alter ego both made appearances during Benedict Cumberbatch’s May 7 Saturday Night Live hosting gig. Well, sort of.

During a pre-taped sketch, SNL’s Chloe Fineman proves her skills as the show’s go-to understudy — effortlessly mirroring the mannerisms of co-stars Kate McKinnon, Cecily Strong, and more. She even manages to trick Cumberbatch himself, stepping into his dressing room to put on a very convincing Olsen vibe (while wearing full Scarlet Witch garb because, why not?). “You know who would be great in the next Doctor Strange is SNL’s understudy Chloe Fineman,” she tells the host. The sorcerer himself buys the act — but then, the actual Olsen walks into the room and makes him question everything.

“Oh my god,” he says, after each “Olsen” insists she’s legit. “The Multiverse is real.”

After the show, Fineman gave a shoutout the Emmy-nominated WandaVision star on her Instagram story, thanking her “for being so game and absolutely crushing it!!”

And game, she was — especially since Olsen tends to distance herself from live audiences where Marvel is concerned. As she told Jimmy Fallon earlier in the week, she’s so wary of a potential lukewarm reaction from fans that she won’t even watch her movies in the theater. “I just decided I can’t watch these Marvel movies at a premiere anymore,” she said. “Every time, I just watch it and I look around me, and I’m like — well, it’s our first flop. Like, every time.”

For the record, Dr. Strange in the Multiverse of Madness has been anything but a flop. The film’s opening weekend has been a huge box office success, with ticket sales reaching $185 million in North America, per Variety. That’s a vast difference compared to recent Marvel titles such as Shang-Chi and the Legend of the Ten Rings and Eternals, which debuted to $75 million and $71 million, respectively, amid battle public health restrictions and concerns. Still, everyone has their things and fans can at least be grateful that Olsen was willing to join Cumberbatch on Saturday Night Live.