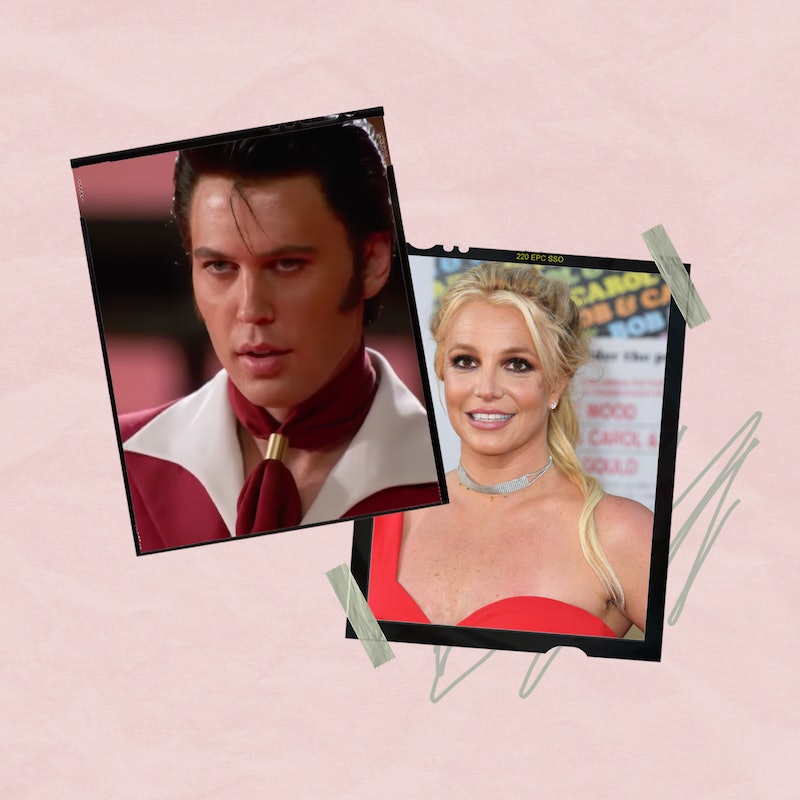 If you can’t get enough of Austin Butler singing in Elvis, you’re not alone. In his portrayal of The King, Butler expertly tapped into Elvis Presley’s signature smooth, low voice — and it’s mostly his vocals you’ll hear in the film, with Presley’s mixed in for for the musician’s later years, composer Elliot Wheeler told Variety.

But lest we forget, this is a Baz Luhrmann movie! So there are plenty of modern musical flourishes scattered throughout, too. Some of the Elvis soundtrack collabs were announced ahead of the film’s June 24 release — like Kacey Musgraves’ cover of “Can’t Help Falling in Love,” or Doja Cat’s “Vegas,” which has been used in more than 100,000 TikTok videos (and counting). But if you listen closely while watching Elvis, you’ll notice that there are some surprise musical Easter eggs, as well.

One of the most exciting musical moments? Britney Spears’ “Toxic,” which can be heard around the middle of the film, during a splashy montage of Presley’s film career and life with Priscilla. As New York Times writer Kyle Buchanan tweeted after the Cannes premiere of the film, it’s also interpolated with Backstreet Boys’ “Everybody (Backstreet’s Back).”

If you missed the moment on your first viewing, don’t worry: it’s subtle! And as Pitchfork points out, it’s the familiar strings of Spears’ 2003 classic — not her actual voice — that can be heard during the montage. The sampling serves as a subtle way to link two of history’s most iconic musicians, while also acknowledging the similarly complicated (read: toxic) relationships each had with the strains of fame and bad management.

But the connection doesn’t stop there. Spears has long been vocal about her love for The King, recording her own cover of “Can’t Help Falling in Love” in 2017 — and walking down the aisle to that same, dreamy song this June.

Spears even began her 2007 MTV Video Music Awards performance of “Gimme More” with Presley’s opening lyrics from “Trouble” — “If you’re looking for trouble / You came to the right place.” And in one 2002 interview, she praised Presley’s unique physicality and performance style. “He just had this presence and this aura about him, that you couldn’t take your eyes off,” she said. She even slipped into a Presley-esque jumpsuit while promoting her early aughts Live from Las Vegas special.

So it seems that Spears’ indirect involvement with Elvis was a perfect nod, on multiple levels. The only catch? As Variety reports, the moment didn’t make the movie’s official soundtrack on Spotify — and if you were hoping to stream Elvis and listen for the moment at home, you’ll have to wait a little bit longer (it’s expected on HBO Max this August). That means you’ll need to rewatch Elvis in theaters to appreciate the musical Easter egg in all its glory. But hey — it also means you’ll get to sit through Butler’s sultry “Trouble” performance again, and is that really so bad?