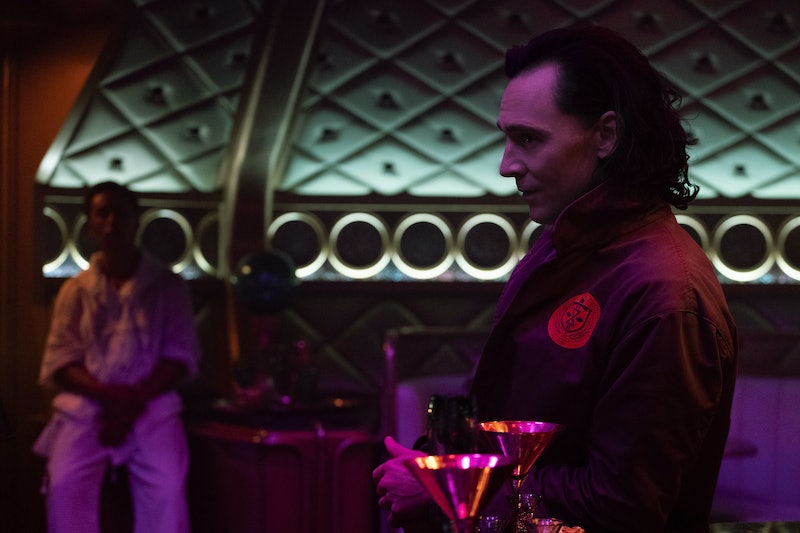 Spoilers ahead for Loki Episode 3. During Loki’s train ride with his chaotic counterpart/twin flame/new best friend Sylvie during Episode 3 of Loki, the God of Mischief opened up more than viewers have ever seen. Not only did Loki share that his relationship history includes both “would-be princesses” and princes — making him the Marvel Cinematic Universe’s first LGBTQ+ lead — but he also reflected on memories of his mother, Frigga, citing her as the woman who taught him magic. (Those little hand fireworks are just one adorable example of her lasting impact.)

“She was good,” he said. “Purely decent ... when I was young, she’d do these little bits of magic for me. Turn a flower into a frog, or cast fireworks over the water. It all seemed impossible, but she told me that one day I’d be able to do it, too, because... because I could do anything.”

The emotional moment was the series’ latest instance of drawing focus to Loki and Frigga’s history — the first being that heartbreaking scene at the Time Variance Authority in Episode 1, where Loki finds out his mother would be killed by the Dark Elves and he is partially to blame.

In both the comics and the MCU, Loki’s dynamic with his mother was a fractured one — yet full of sweet moments, too, with Frigga often showing Loki a warmth that he didn’t always get from Thor or Odin. Here’s everything to know about Loki and Frigga’s relationship and how Loki could be setting up a moment of closure between the pair.

Loki & Frigga’s Relationship In The Comics

Just like in the MCU, the comics’ Loki entered the Asgardians’ royal family as a baby Frost Giant. Per Marvel, Frigga (whose name is also spelled “Freyja” in the comics) “grew to accept and love her adopted son ... establishing a bond that Loki never had with his adoptive father, Odin.”

Of course, that bond was complicated. At one point, Loki killed Frigga’s biological son Balder (who’s not in the MCU) and brought about Ragnarok. And during the Asgardians’ skirmish with the Dark Elves in 2016’s Mighty Thor run, Loki stabbed Frigga in the back and sent her into a coma. To be fair, the literal backstabbing was part of a Loki scheme to keep Frigga from being murdered by a bigger enemy, though no one else knew that at the time. Still, that’s a bit of baggage.

Then in 2019’s War of the Realms series, Loki heroically sacrificed himself to save Frigga from his biological dad — the Frost Giant Laufey — proving that he would actually do anything for his mother.

Loki & Frigga Had A Bittersweet Goodbye

In the MCU, Loki and Frigga’s relationship has seen similar ups and downs. As was revealed in Thor: The Dark World, Odin would’ve liked to kill Loki as punishment for his attack on Earth — but the Queen of Asgard had other plans. “Frigga is the only reason you’re still alive, and you will never see her again,” the All-Father told Loki before banishing him to the dungeons. Down there, Loki’s life as a prisoner is a little less crushing thanks to small comforts like books Frigga sent to keep him busy — but he’s too angry to appreciate the gesture and instead tells Frigga that she isn’t his mother (nor Odin his father).

When he realizes his mistake, he goes to embrace Frigga — only to slip through her duplication-casted fingers. Hey, she taught Loki everything he knows! Sadly, Frigga was murdered by the Dark Elves that same day, but a deleted scene provides some added perspective to their relationship and Loki’s magic: as Frigga tells Thor, “You and your father cast large shadows. I had hoped by sharing my gifts with Loki that he could find some sun for himself.”

A Possible Nod To Frigga In Loki’s Asgardian Song

As Screen Rant reports, a potential nod to Frigga might be found in the form of an Easter egg in the lyrics of Loki’s song on the train. The song, which was written for the show, conveys a sense of homesickness in its English translation — “In the apple orchard the fair maiden stands and sings, ‘When will you come home?’” Of course, “fair maiden” could certainly be referring to Sylvie in this case, but the timing of the song right after Loki’s reflection makes it sound like he’s missing home (and Frigga) pretty bad right now.

How Loki Could Provide Some Much-Needed Closure

Thor had his heartwarming moment with Frigga in Avengers: Endgame, where the heroes’ time travel allowed the God of Thunder to see his mom one more time. “You’re here to repair your future, not mine,” she told him — OK, does she work for the TVA? — and Loki deserves the same. A hug and some sage advice would be a beautiful moment of closure between the mother and son, and the Loki of Loki is finally self-aware enough to appreciate it.

With the TVA in chaos mode, now would be the perfect opportunity for Loki to hop on another timeline and reunite with Frigga. It could even be one of the series’ multiple “love stories” that head writer Michael Waldron teased to Vanity Fair. Plus, a new featurette shows a peek at young Sylvie — and if viewers learn about her backstory, it’s plausible that they could see a Loki flashback or two to highlight the variants’ parallel lives.

Either way, several of Loki’s most emotional scenes have revolved around Loki’s love and admiration for Frigga — so it definitely seems possible that there’s a catharsis coming soon.

More like this
'The Sandman’s Ending Is A Departure From Neil Gaiman’s Comic Book Series
By Kadin Burnett
'Bridgerton’s Jonathan Bailey & Simone Ashley Just Teased A First Look Of “Kanthony” In Season 3
By Grace Wehniainen, Alyssa Lapid and Sam Ramsden
The 'PLL: Original Sin' Creators Say A’s Identity Will Be “Very Clear” By The Season Finale
By Alyssa Lapid
Everything To Know About The Sandman Season 2
By Kadin Burnett
Get Even More From Bustle — Sign Up For The Newsletter